The residents of Chaithanya Samarpan layout at Kadugodi, north of Whitefield, started smiling in late May when pre-monsoon showers blessed Bengaluru and then continued into June.

Water stopped in a storm water drain. It gets diverted into the collection chambers through the PVC pipe shown. Pics: Rainwater Concepts.

But their smiles were not just because the rain brought much-awaited respite from the heat wave of April and May. It was because earlier this year the Samarpan owners’ association had initiated a massive rainwater harvesting project for the layout. A network of water trapping, filtering and harvesting structures were built underground. The network consists of two 350 ft deep shafts, six recharging tanks, 45 Infiltration wells, alongwith 10 pre-existing water soak pits.

Everyone was looking for the arrival of the rains. Unlike the previous few years where the rains were wasted at a time when the project was still on paper, these were the maiden rains for the community’s harvesting scheme. 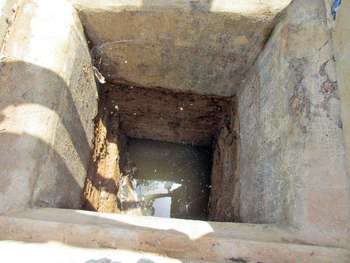 As it turned out, Bengaluru received major rains in the last week of May. After these pre-monsoon showers, Manjunath Athrey, 44, the Samarpan management committee member in-charge of the project called the contractor firm and asked them to show him proof of water getting collected and sent into earth. Sure enough, the pictures told the story for every structure that was checked.

Athrey is an R&D Director on a global tech major in the city. He oversaw the execution of the project down to the last detail, with the help of several other volunteers and other management committee members. Rainwater Concepts, headed by Ayappa Masagi, undertook the work. The association’s management committee enthusiastically backed the project from conceptualisation to detailing and raising funds from all the owners.

“Water conservation/regeneration is a fear that turned to necessity and is now turning into a passion,” says Athrey about his own interest in the project, adding that it has given him a sense of doing something worthwhile.

At the same time, Athrey is quick to note that one such association doing wholesale RWH alone won’t be enough. “I look forward to the day “when all the associations along the Whitefield-Old Madras Road region take up RWH and Whitefield and water scarcity are no longer mentioned in the same breath,” he says.

Naresh Kumar, 47, president of the owners’ association, strikes a happy tone. Kumar is a General Manager at another tech major in Bengaluru. He is pleased that the project was completed in time with equal financial participation from each family in the community. As a community, they realized the gravity of the water problem, he says, and and also that the best resource at the disposal of residents to address the water table issue was to tap rain water. “This was more so given that we had a land area of 32 acres, and there was seemingly enough rainfall in the last few years too, which could be tapped and used to recharge our wells”, he points out.

“I hope that we will see the return on our investment in the next couple of years”, says an upbeat Kumar, pointing to the fact that the community was looking forward to source water from the underground well infrastructure for the layout’s needs itself, to get rid of dependence on tankers, and that journey has only begun.

Bengaluru Buzz: No to cremations at landfill | Vaccine wait longer for 18+ | Search for beds, oxygen … and more

An epic tale that explores physical beauty and love

The physical appearance of external beauty, was what this production seemed to concentrate on. Dance-drama atmosphere was maintained by the initial choreography, with some beautifully choreographed movements, and then there was more of drama.

Citizen should be ruler; Govt, the servant

Prof. Rajeev Gowda, Chairperson of Centre for Public Policy, Indian Institute of Management, Bangalore, shares his vision for the government with Citizen Matters.