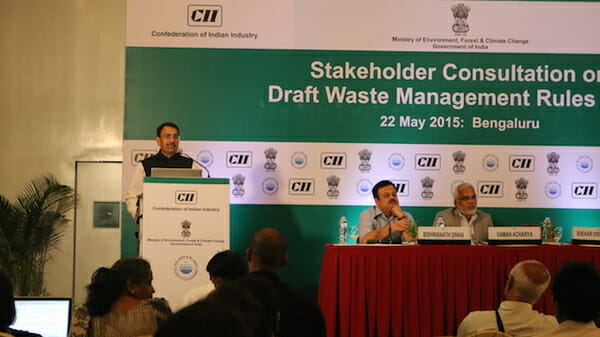 The stakeholders consultation on Draft Waste Management Rules 2015 which was arranged by the Ministry of Environment and Forest (MoEF) in the city on Friday, was called off as the public who were present raised objection over Confederation of Indian Industry (CII) sponsoring the consultation programme.

The programme witnessed heated arguments between the public, officials from MoEF and office-bearers of CII. Leo Saldanha from Environment Support Group (ESG) took exception to the CII sponsoring consultation of a draft proposed by the government.

“As per the constitutional provisions, the programme should have been organised by the government or any government agency rather outsourcing it to a lobbying group for industries like CII,” he said and questioned the legal sanctity of a consultation sponsored by a private organisation.

Srinivas, panchayat member from Mavallipura, while explaining the sad state of affairs of the village due to garbage landfill sites, asked why the consultation programme was organised in a such a place (Le Meridien hotel) where free entry for common man is restricted.

MoEF Joint Secretary Bishwanath Sinha though tried to convince the public, his attempts went futile. In fact, the officer could not give a clear answer as to why the Ministry has partnered with CII. At one point, he said the programme was open for all and then he went on to say that the consultation was for industrialists only as they are the main stakeholders. “The programme was originally meant for industries, but when we were approached by a few public who asked if they can attend the programme, I decided to make it open for all,” he clarified.

He added that the Ministry had decided to organise the consultation in partnership with Central Pollution Control Board (CPCB), Federation of Indian Chambers of Commerce and Industries (FICCI) and Confederation of Indian Industries (CII). “We have 550 days time before finalising the Rule and we intend to convene separate stakeholder meetings with public,” Sinha assured. However, he refused to pay heed to demand of the NGOs to oust CII from partnership. He called off the meeting.

Majority of the invitees were from industries such as automobile, cement, who had come from Karnataka, Tamil Nadu and Andhra Pradesh. Stakeholder consultations have been already held in Delhi and Mumbai.

Tell BDA it is unconstitutional for them to plan Bengaluru: ESG
Look who BBMP signed up to process waste in Bengaluru
How your apartment complex can be a waste-free zone
Lessons in e-waste management

One apartment wastes water, another pays

Water metering in apartments has always been a challenge. New technology solutions are emerging that could solve this vexing pain for residents.

From the fire at aeroshow to summer outbreak of diseases to BBMP’s budget session discussions, all important stories from the last week in one place.

Amid some complaints that the police are not allowing movement of staff involved in essential services during the lockdown, Bengaluru city police commissioner Bhaskar Rao issued a memo that specified who would be allowed to travel in the city. The police would be giving passes to them, his memo says.