A battery of senior officials of the Bangalore Metro came to a Public Hearing called by Ranganathaswamy, Asst Conservator of Forests (Bangalore South) and Tree Officer of Bruhat Bengaluru Mahanagara Palike. The officials came armed with power points demonstrating that the Metro is a major progress from ancient forms of transport. They showed pictures of how humans have made a transition from bullock carts to cycles, overloaded jeeps, buses, trains and onto the slick comfort of the Metro. They were, thus, attempting to make a case that the extension of the Metro lines on Kanakapura Road and Mysore Road involving the felling of 300 old giant trees, was a price worth paying. They also claimed that they had worked hard to minimise the felling of trees, and come up with an alignment that would absolutely cause “least damage to the environment”. 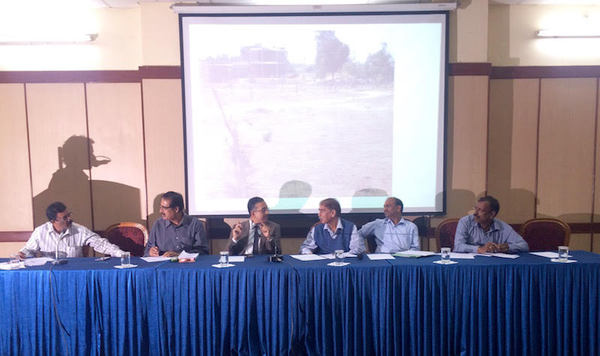 The Public Meeting was called by the Tree Officer in compliance with the direction of the Hon’ble High Court of Karnataka in WP No. 7288/2011, wherein public involvement in such decisions has been made mandatory. The Court had deemed “it necessary to direct that felling of trees would be undertaken as an exception rather than a rule, and further that the tree officer and tree authority would fully satisfy themselves and certify that all other alternatives have been considered regarding the feasibility of the felling of trees. If any objections are received from the public, due consideration shall be given by assigning reasons”. It may be recalled that when a similar meeting was called on November 17th, only a couple of days notice was given via email to some individuals, resulting in the participation of only one person: Vinay Sreenivasa of Alternative Law Forum. On that day, Mr. Kumar Pushkar, IFS, Chief Conservator of Forests and Spl. Commissioner (Finance), BBMP along with the Tree Officer had decided to postpone the Hearing for a more capable and informed participation by the wide public, and had assured all information relating to the project’s expansion and its impacts would be priorly released. The meeting was called today without keeping this commitment.

Leo F Saldanha, Coordinator of Environment Support Group questioned the legality of the meeting by bringing to light the fact that the High Court of Karnataka in its final order in WP 13241/2009 (Environment Support Group and ors. vs. Bangalore Metro and ors.) had held that the expansion of the Bangalore Metro project (beyond the 42kms Phase I), could only take place in strict compliance with the provisions of the Karnataka Town and Country Planning Act, 1961. He said the Court had noted that Bangalore Metro had comprehensively violated the law in the Phase I, and since it had already started construction and created fait accompli, any future expansion would not be allowed in violation of this fundamental planning law that demands careful and comprehensive planning of environmental, social and economic impacts. The Court had thus held that “a direction is issued to the State Government, as also, the Bangalore Development Authority to ensure that in future, in case they desire to change the land use, as has been depicted in the master plan, the competent authority shall follow the procedural mandate depicted in Section 14-A of the Karnataka Town and Country Planning Act, 1961 And likewise in case of making a town planning scheme, the State Government, as also the Bangalore Development Authority shall comply with the procedure contained in Sections 29, 30, 31, 32 and 34 of the Karnataka Town and Country Planning Act, 1961“. The Court also confirmed that the responsibility of conforming with the law and its direction would be binding on individual officers and made this explicitly clear stating: “(n)eedless to mention, that in case of violation of direction issued by this Court, based on statement made to this Court, the concerned officer/official shall be held responsible, for his having disobeyed the order passed by this Court, as also, the prescribed mandate of law“.

One would hope that planning agencies of Karnataka Government, Bangalore Metro and the BBMP would strictly comply with the law considering this categorical direction. Instead, the meeting was called without any prior preparation of designs, feasibility reports and impact assessments for the expansion of the Bangalore Metro. The officials had literally come with nothing. 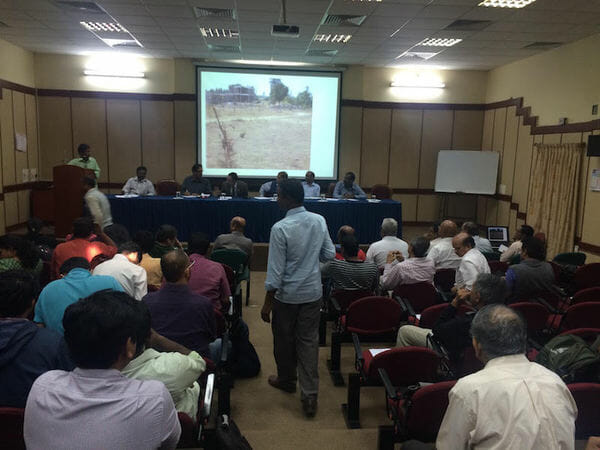 Various individuals, including from Hasiru Usiru network, who participated in the Hearing, demanded that it be postponed till such time Bangalore Metro was able to comply first with the direction of the Hon’ble High Court of Karnataka in WP 13241/2009 involving compliance with KTCP Act. Once these statutory clearances are secured, then, and only then, could any public consultation and decision making relating to felling of trees be initiated, they argued. In the meantime, Bangalore Metro could demonstrate how it has complied with the directions in WP 7288/2011 wherein it is specifically required that all afforestation activities undertaken for the damage done to trees under Phase I of the project is demonstrated. This ought to be done by providing accurate details, including exact location of saplings, their survival, and ability to independently verify the success of afforestation and also sharing publicly the accounts and reports of these efforts. At the Public Hearing on November 24th, Bangalore Metro officials could produce no such information.

A point of order was also raised that Pushkar could not officiate the Meeting as he is now a BBMP official, and thus an officer of an applicant agency. This would violate the direction issued by the Hon’ble High Court in WP 7288/2011, wherein it was highlighted that it would “…amount to a person being a judge in his own cause, which is anathema in law…”. Pushkar admitted to this infirmity in procedure and advised the Tree Officer Mr. Ranganathaswamy to call for a new Public Hearing on the matter only when Bangalore Metro had demonstrated compliance with the aforementioned directions of the High Court of Karnataka and had also prepared comprehensive environmental impact assessment reports. It was also confirmed that, henceforth, Public Hearings would be called within the Impact Zones and not 25 km away, as was the case with the cancelled Hearing.

A Joint Representation made to the authorities can be viewed below.

Meeting called by Bangalore Metro, and called off by citizens’ demand

For a greener city

At a time when many Bangaloreans are concerned about the reducing tree cover in the city, some government bodies and citizens are actively engaged in planting more trees.

South India Coalition for Proportional Electoral System to be launched

Regional parties that find themselves way behind the ‘big fish’ in electoral politics, eminent people’s movements and civil society organisations as well as deeply committed individuals will come together to formally launch the South India Coalition for Proportional Electoral System.