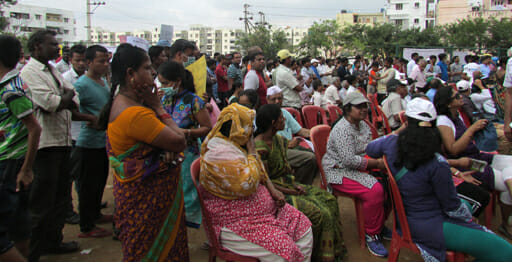 ‘Garbage-free? Garbage is free here!’ ‘Allow us to breathe clean air,’ ‘KCDC, shut down or behave,’ ‘Process! Don’t pollute,’ ‘I want to go for fishing and boating at Somasundarapalya lake,’ read some of the placards.

From children to senior citizens, majority of the crowd were holding placards that conveyed their demand to the Karnataka Compost Development Corporation (KCDC). About 500 residents of HSR Layout and nearby areas had assembled on the banks of Somasundarapalya lake, a few metres away from KCDC unit on Saturday morning, to protest against the stench emanating from KCDC’s garbage processing unit. The peaceful protest by the residents under the slogan “Right to breathe,” was staged in order to send a message to the State government and BBMP to put an end to the mismanagement in garbage composting issue.

People participate in the protest against KCDC compost unit, in a large number. Pic: Akshatha M

This is not for the first time residents of HSR Layout are staging protest against the problems caused by KCDC unit. Several assurances were given to them in the past, but the problem continues to persist. Hence, this time, residents of the area, specially apartment-dwellers got to the street unitedly under the banner of KHHSP (Kudlu Gate, Haraluru, Haralukunte, Somasundarapalya and Parangipalya) Residents’ Welfare Association.

Residents to take up a legal fight

Worried over the air and water pollution caused by compost processing unit due to unscientific dumping of mixed garbage, the protesters placed a list of demands before the BBMP and State government. They also signed a petition to be submitted to the government.

This time, aware of false promises by the authorities, the residents have gone a step ahead and have decided to take up a legal fight to end the issue. Anis Padela, one of the organisers, informed Citizen Matters that the residents have realised they can justice only through legal means. “We know that this protest is not going to solve the problem, but our aim is to create an awareness about the issue and send a strong message to the authorities who have failed to address the problem. We are exploring legal options and compiling resources for the same,” he said. 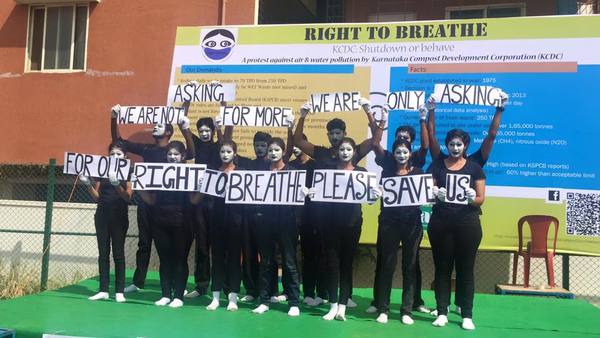 Earlier addressing the gathering, Anis Padela took a dig at the authorities for making HSR Layout yet another Mandur. “Chief Minister had visited the KCDC composting unit recently. After listening to our problems, he promised that he would direct the officials to ensure reduction in the quantity of garbage coming in. Surprisingly, we have learnt from the KCDC registry about an increase in the quantity of garbage flow in last two weeks,” he said.

He also questioned the delay in implementing odor managing technology at the composting unit. Last year, BBMP’s Solid Waste Management then Special Commissioner Darpan Jain had assured of implementing the new technology by November 2014. It has been a year now, yet the system has not been put in place, he rued. 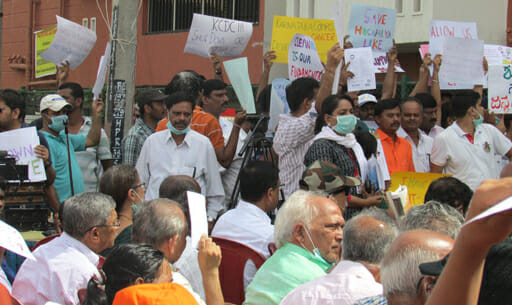 People from all generation, youngsters to senior citizens take part in the protest. Pic: Akshatha M

Residents of HSR Layout who had participated in the protest shared their grievances. “The stench from KCDC unit has increased in last few months. We cannot really enjoy going out on a walk because of the bad air. Even the children ask us why is the atmosphere so bad here. We are made to suffer because of the pollution,” says Antony, an IT employee who lives in the area.

While criticising the authorities for poor waste management in the city, Sohel Mohammad and Shaheen Mohammad who reside in a neighbourhood apartment said that they process the waste systematically in their apartment. “There are about 370 housing units in our apartment. We compost 120 kgs of wet waste everyday. Dry waste is segregated and sold to Dry Waste Collection Centre. Out waste output is reduced by 80 per cent. Even after scientifically doing waste management in our apartment, we are forced to breathe polluted air emanating from KCDC, which is not at all fair,” they said. 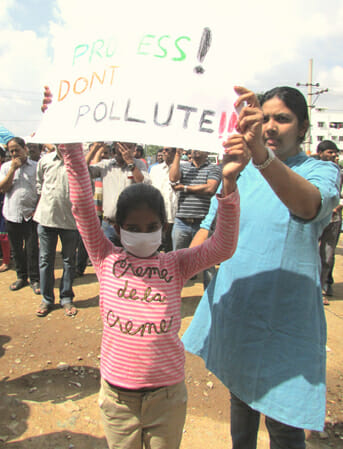 A child covers its nose with a mask and holds a placard during the protest. Pic: Akshatha M

Another resident, Mira complained about falling ill often due to allergic reaction. She suspects polluted air in the area as the reason for her allergy.

HSR Layout residents have placed a list of demands before the State government and BBMP. Here are their demands:

Meanwhile, the city is facing garbage crisis yet again. With villagers of Gundlahalli in Doddaballapur staging protest against the city garbage entering their village, solid waste management plant Terra Firma located in the village has been temporarily shut down since three days. Due to this, the garbage is piled up on roadsides in Bengaluru, especially in northern/western parts.

An official from Terra Firma said that the plant used to receive 700 tonnes of mixed waste from the city everyday. The plant has stopped receiving garbage since Sunday owing to people’s agitation.

The last time when villagers had staged a protest in June, the BBMP and the State government had assured them of improving the situation “soon” once the new solid waste management plants start functioning. Though new units started functioning in three places – Mavallipura, Bingipura and Lakshmipura, they too have faced people’s objection. Five more proposed units are yet to open.

60,000 tonnes of waste dumped in KCDC landfill; composting stopped
MLA backs citizens protesting against KCDC
Will the KCDC neighbourhood finally be free of smelly nights?
HSR Layout residents to protest against KCDC on Oct 31
How is wet waste processed at the KCDC?
Karnataka composting firm back in the limelight
Can of worms opens up after govt composting firm sells garbage as vermicompost
Govt composting firm to review ties with Terra Firma on supplying organic compost

Finally the police have arrested the chairman of Vibgyor school, as the school did not report the offence to police, and tried to destroy the evidence after the rape on a child. This is also an indication of what schools in Bangalore and other areas should do in case of such incidents.

Ahead of the BBMP elections, Lok Satta party launches the ‘Empower Lokayukta’ campaign in Bengaluru. The party says it plans to collect one lakh signatures or more.