Growing up in Bengaluru for me has always revolved around the Cantonment – early morning walks under the tree-lined avenues towards Richards Park, eating Ritchies mutton biryani on MM road (back in the day when a plate was a meagre Rs 40), or buying weekly groceries from Thoms after Sunday mass.

Historically, the Cantonment of Bengaluru dates back to the 18th century, specifically 1807, when the British defeated Tipu Sultan’s army and established themselves around the Ulsoor kere. The British established various typologies from large parks and shopping centres to parade grounds and schools, the most important being the colonial bungalow typology.

These bungalows are architectural marvels in themselves, set on large landscaped sites with their beautiful monkey top roof forms, rich teak wood frames, rose windows, and painted with soft soothing colours. Sadly today, these bungalows are on the decline, due to real estate development. Also due to the fact that they are housed on fairly large sites, it is economically attractive to convert these into multi-storied apartments with three metre setbacks all around. 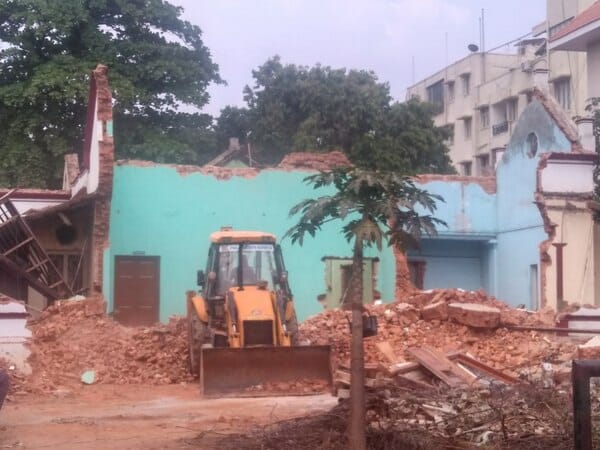 A colonial bungalow on Pottery Road being demolished to make way for a newer development. Pic: Benjamin Mathews John

Just last week, one such beautiful bungalow located on Pottery road next to the Mizpah Telugu church was brought down to give way for a real estate project. Once upon a time, Pottery road was dotted with beautiful colonial bungalows; today, just two or three bungalows remain on Pottery road, and not more than about 15 in the Cantonment.

So majority of you would conclude that the discourse so far has been a rather romantic, reminiscing about our colonial inheritance, a colonial hangover of sorts. Also your counter argument would be that these bungalows are privately owned, so what can anyone do towards its protection? National and international case studies have shown that heritage conservation does not just give rise to aesthetic improvement in built form, but larger positives attributed by economic regeneration and social development. To conserve and protect the existing bungalows, something as simple as adaptive re-use can be proposed for the bungalows which are lying vacant.

The narrative with regards to Bengaluru’s heritage has largely revolved around the Vidhana Soudha and the pete. The Cantonment has been looked at as a historic symbol of control or oppression over the natives and maybe not worth protecting. It is time the State Department of Archaeology, Museums and Heritage (GoK) and the Archaeological Survey of India (ASI) take cognisance of the situation. A paradigm shift in our approach towards heritage conservation is required, if we want to leave our rich culture and heritage for our future generations.

I will conclude by quoting the late Dr. A.P.J Abdul Kalam: “We will be remembered only if we give to our younger generation a prosperous and safe India, resulting out of economic prosperity coupled with civilisational heritage”.

A mathematical decoding of urban traffic

Footpaths should be fixed and made widely available, continuous, and uninterrupted. Maybe then those who create traffic jams might try to walk and reduce the jams?

In a film ridden with melodrama and many old clichés, the only redemption lies in the film’s sophisticated production values and spellbinding choreography. Both make for extremely watchable cinema.