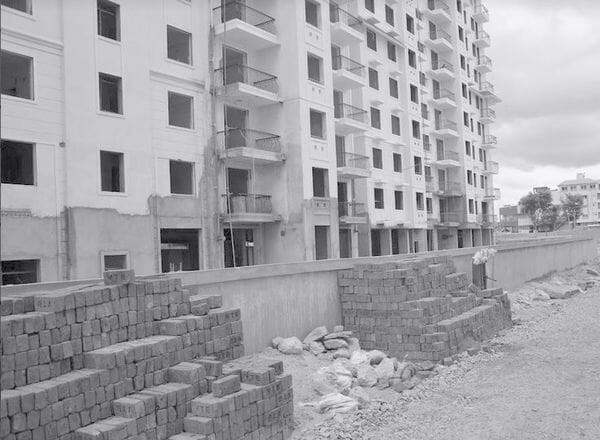 The longstanding suffering of home buyers at the hands of the builders may be a common occurrence. This is the story of how three of us fought to get our due from the builder. It has been a long battle for my fellow buyers Kartikey Khanna, an RTI activist, and MS Shamasundara, an armed forces employee, and me.

We had put our hard-earned, lifetime’s savings in what we thought would be our dream house. Like so many others, we were impressed with the lofty promises of world class living standards and amenities and quick possession (within 36 months of signing the agreement), But destiny had other things in store for the poor buyers who had unwittingly fallen into the trap.

The project was located in south-eastern Bangalore, a few kilometers away from the famous Bannerghatta National Park, and was supposed to start construction in 2009.

Things were hunky dory till the end of the first 36 months, ie, till June 2012. The builder claimed that 95% of the construction was over and had already charged the customers 95% of the total sale price. It was all downhill from there onwards.

The first tactic adopted by the builder was simply not to share any updates. They even refused to even meet customers visiting their office. When finally some residents managed to get through, the staff there feigned ignorance about the whole matter.

In the month of July 2013, came the next shocker. The builder sent a Tax Demand Note (to the tune of Rs 2-2.5 lakhs per flat owner). On questioning, they said that these were due to the new tax components added by the government and they had no control over them. Also, their project was on track for completion shortly, and there has been no delay.

Balconies were arbitrarily added to the apartments without informing the customers (till this date they have not formally informed customers who are still waiting for possession).

In a SEBI annual filing in 2013, the builder claimed that the project was started in 2011 and would be completed by 2015. In addition, the builder reduced the project cost from Rs. 536 Crores to 264 Crores (as per report submitted to State Environmental Impact assessment Authority in October 2013), and reduced the no. of flats to 1833. Apparently the builder started construction before taking environmental clearance.

The builder was supposed to pay delay penalty at Rs 5/sq ft per month to buyers (which comes to around 1.5% of total amount paid). But an interest of 18% was placed on the buyer, for delayed payment, and the customer lost the right to claim delay penalty. The one-sided agreement allowed for this.

The builder justified their demands for additional payments under clause 1.10 of their Buyer’s Agreement that outlines taxes to be paid by the buyer. However, the agreement did not mention VAT and any other taxes arising out of engaging contractors and/or material costs escalating due to delay (more than the promised 36 months for possession as exclusively mentioned in the Agreement) by the builder. Also, nowhere did the agreement mention that buyers are liable to pay for penalties imposed on the builder by the government due to any reason.

They also collected service tax on fire station charge, (which was supposed to be a corporate social responsibility activity by the company, but was brazenly passed on to buyers) but finally the builder decided to reverse it. However, Service Tax reversal hasn’t been committed yet.

On asking for logic and proof of payment of taxes to the Government, the builder showed their CA Certificate and claimed the demands were justified.

In September 2014, hapless customers desperately waiting to get possession of their flats were again slapped with numerous other additional, unplanned charges to the extent of Rs. 4,00,000 – 6,00,000 in the name of various government taxes and charges! In addition to that, the customers have been made to sign on documents with various indemnity clauses in return for getting possession for their own flats for which they had already paid about 120% of the original costs!

No Apartment Owners Association formed as per KAOA

In 2010 the builder registered a society including their own employees as the members of the association and demanded lakhs of rupees under the pretext of maintenance. All buyers were indirectly arm twisted to sign and become members of this society if they wanted to get their apartment registered.

The builder created new address proofs and submitted the same for registration of society. They have created a bank account by using this registered certificate of the Society and had given an ultimatum to all the complainants to become the members of this society. Whoever is unwilling to become a member will not get the apartment registered in their name. This society was formed under the Societies Act with 10 benami members who cannot represent 1900 apartment owners. This is being undertaken in an organised manner by the builder, and everyone, right from the topmost echelons in Delhi, to the officials of the real estate firm in Bangalore are involved.

The builder charged the buyers twice for essential amenities such as infrastructure for power and water connections, fire -fighting equipment and other Common Area development. In spite of Apartment Buyers Agreement (ABA) including cost of electric wiring and fire-fighting systems approved by Karnataka Fire Service Department, the builder charged Rs. 1.5 Lakhs per flat towards electricity, water connection and incidental charges (EWCI) as mentioned in schedule of payments of ABA. This charge should cater for all expenditures incurred by the builder towards electricity connection, water connection and any other incidental charges towards utilities of electricity and water.

After this, the builder again demanded charges of Rs 127.96 per sq ft. during possession, for the same EWCI amenities.

Modus operandi for conning the buyers

There was an uncanny similarity in the malpractices performed by this builder and their modus operandi across all their pan India projects. The modus operandi was this:

With a builder so well-versed in conning the buyers, the buyers really had a tough time. What did they do? Coming up in the next part.

Note: Name of the builder has been withheld in the story because the legal proceedings are in progress. Citizen Matters is in possession of the related documents for this story and has got legal inputs before publishing the story.

About Soumya Nayak 2 Articles
The author has not yet added any personal or biographical info to her or his author profile.

Bengaluru was one of the first cities in India to adopt technology for traffic management. But the number of traffic police personnel here is woefully inadequate