Bangalore has always been home to many locals and migrants. But this welcoming nature now seems to have become a costly affair for its residents. While  the number of trees and lakes have reduced considerably, the number of vehicles and pollution levels in the city have increased considerably, which is posing major health hazards to people.

However, a recent study conducted by the Karnataka State Pollution Control Board (KSPCB) reveals that the pollution level is the least during monsoons, and highest during winter.

This study shows that the pollution level near CIty Railway station, which is at the centre of the city, densely populated area and prime location for vehicular movement, was much lower in monsoons when compared to winters and summers.

Explaining this, KSPCB Scientific officer, B Nagappa says that the reason for increasing pollution in winter is because the planetary boundary layer (earth’s atmosphere above the earth’s surface) which normally is one kilometre, gets reduced to half a kilometre during non-monsoon season. Thus, as the atmosphere contracts, pressure increases and the pollutants in the atmosphere get dense and more concentrated.

He explains that dust is colloidal (non-filterable, non-separable) in nature. It has a gum type of chemistry. Thus during winters it causes an adverse impact on the health of people.

Nagappa also adds that the overall pollution levels in the city have also increased. This can be seen in the graphs given. 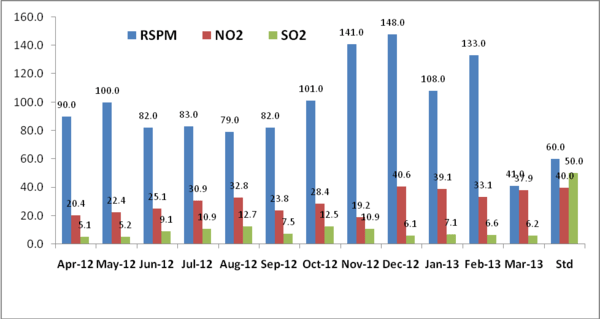 Blame it on bad roads, traffic

Experts point that, while dust is washed away in monsoons, during winters it gets trapped in the atmosphere and becomes more dense. They point that unplanned and unscientific vertical and horizontal growth of the city is the root cause of all the problem. But the biggest contributor is the large number of two-wheelers commuting on city roads and bad road conditions.

“Another factor is bad roads, increased traffic and large number of vehicles. My house is on West of Chord road. My office is just eight kilometres from my residence and ideally it should take me 15 minutes to travel, but it takes me an hour. So the fuel which should be burning for 15 minute now burns for an hour,” Acharya says.

He adds that this is the problem in the central business district which is highly polluted and populated. Vehicular speed ranges from 8-15 kmph. Mounting number of two wheelers in Bangalore contributes most to the rising pollution levels.

Unburnt petrol from two-wheelers most harmful

Prof J Srinivasan, chairperson of Divecha Centre for Climate Change, Indian Institute of Science (IISc), Bangalore, supports the findings of the KSPCB study. Rains dilute or wash out the pollutants in June to September. But between January and April, when there are no rains, air sinks, season is dry and the pollutants are trapped in the air. The air sinks in winters, thus the pollutants like dust cannot rise so pollution levels are high.

The solution, he says, should be that vehicles should emit less pollution. It is important to solve the problem at the source itself. The biggest contributor to rising pollution, according to him, are two-wheelers. It is not much from construction sites as large particles are emitted which do not enter our nose. But the sub-micron particles which are emitted from vehicles are the most dangerous. This is because, unlike in cars where there are filters and other device controls, in bikes unburnt petrol is emitted which is highly dangerous and leads to cancer and heart attacks.

He further explains that Bangalore has a dry weather and is in centre of the continent, unlike Chennai and Mumbai. The number of trees and lakes have also disappeared which once helped in striking a balance.

Dr Ajith Benedict Rayan, vice-president of Hosmat Hospital points that emissions from two wheelers, when inhaled, lead to immediate cough and allergies. Around 17 per cent of the air is polluted with particulate matter and 67 per cent with nitrous oxide which is emitted from two- wheelers.

He points that since car engines are Euro models, they take care of the pollution levels, but this is absent in case of two-wheelers. They are not pollution-free and thus are a major worry now.

However, Dr Ranganath R, consulting pulmonologist at Narayana Hrudayalaya, says that while the number of cases of new patients with respiratory problems is more in winters, those who are already suffering from asthma or wheezing suffer from allergies during monsoons too. There are different reasons for this, such as various allergens like pollen, food and weather.

The Green Manifesto has been drafted by Bangalore Eco Team and Association of Green Industries and Services, and will be presented to all parties and contestants in the Karnataka Legislative Assembly Elections, 2018.

AC buses on BIG-10 routes from May 4th