On the new year’s eve the State government appointed senior IPS officer Praveen Sood as the Police Commissioner of Bengaluru. On the same night, incidents of ‘mass molestation’ were reported in the city, showing Bengaluru in a bad light.

Now that the dust has settled, and the police chief is completing three months in his office, he says he is working with an agenda which he terms as “citizen empowerment.” In a detailed interview with the Citizen Matters, the Police Commissioner tells why it is important for city police to shift from citizen awareness to citizen empowerment – to make people know their rights in terms of policing. He also talks about a wide range of issues including traffic management, use of technology in policing and improving police reach for citizens in need. Here is first part of the interview. 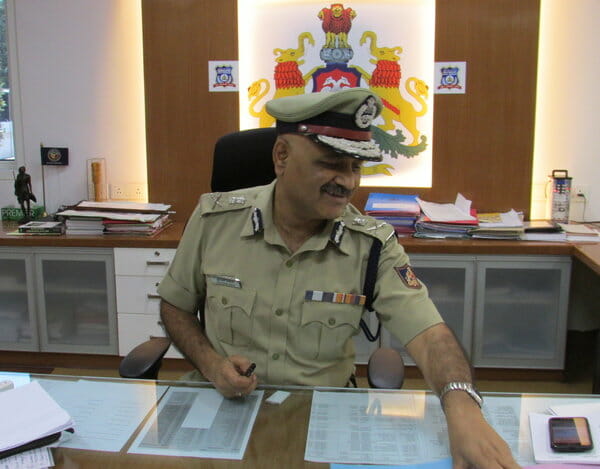 What is your immediate concern as the police chief of the city?

My main concern is to include technology in policing. We have no shortage of funds to invest on technology. But the problem has been with the gestation period – from the time the fund is sanctioned to the time it is spent on executing the project. I would want to cut down that gestation period.

I strongly believe that the police image is gauged by how fast the phone call is picked when people dial 100. Often when citizens call the police control room, there is delayed response. The first challenge before me is to ensure that the police pick the phone call in less than 15 seconds. Second, how fast they (police control room) convey the information to Hoysala (patrolling vehicle) and the time that Hoysala takes to reach the spot. The task I have assigned myself is to ensure that the vehicle reaches the spot in 10 minutes on an average in the long run and 15 minutes in the short run. Third challenge is what does Hoysala do when it reaches the spot. These are the three things that I want to deliver, and I believe it can be done with the help of technology.

You said you want to cut down the time gap between calling and receiving when people dial 100. But how?

So far only 15 lines catered to a population of almost one crore in Bengaluru due to which often people would find the telephone line engaged when they dialed 100. We are making massive investment of Rs 20 crore to improve dial 100. We are going to have 100 lines soon. The service will be made available in multiple languages.

Also, we would like to make sure that return call is made to all the missed calls that police control room receives. In addition, we have put up a system in place to make third party assessment on the quality of service delivered by the police control room. The process has already started. Third party agency is making calls to people and asking them how satisfied are they with the police response when they dialed the emergency number.

By when can citizens expect to have this system in place?

Within two months. The work is progress. In fact, the system would be ready in next 10-15 days. But the testing, hiring and training would take some time. I want all this to be fully in place by April or May.

Recently there were newspaper advertisements informing about citizens rights in cases of drink and drive. This is a pleasant development considering that often citizens are not aware of do’s and don’ts if they are caught for traffic violations. What is this initiative all about?

We are doing something that has never been done before, i.e, to empower citizens. All these years we have been talking about awareness, but now it is time to talk about empowerment. In context of traffic, often the public and police are in loggerheads in case of towing or drunken drive test. This happens for two reasons – the citizens are ignorant of the law and procedures and also because at times the police fail to follow procedures. So we are taking up two important initiatives.

First, we have released a 10 minute youtube video on standard operating procedure for training traffic police for drink and drive cases and for towing. But my opinion is, the issue cannot be fixed only by training the police, but it requires citizen empowerment too. Therefore, we have prepared a short three minutes informative video for public. The towing video has been released, which will answer all your questions about the penalty to be paid, towing charges, how to pay it, why two receipts are issued, what to do in case the vehicle is missing etc. The advertisement about do’s and don’ts in case of drunken drive published in the media has been converted into a video now.

The purpose of the video is to ensure that the police and citizens do not end up in a scuffle. It’s bad when a police assaults a citizen and but it’s worse when public hit the police, because you are hitting an institution. It happens because of differences of opinion. Video version of Standard Operating Procedure (SOP) for police and citizens, standardises everything and ensures that no grey area is left.

All these years we have been talking about public awareness. It’s time to end public awareness. Enough awareness has been created. Let us empower them. Let them know their rights too. So if police have failed to follow the procedure, citizens who are empowered with information can question it. The condensed version of same videos will be screened in all cinema halls.

But, do you think this will stop commuters from giving bribe to police and get away with?

I will not talk about bribe. People who want to bribe, will bribe and get away with in any case. Do not blame the police of taking bribe, because it’s people who are offering bribe instead of paying the penalty.

In one of your tweets you said traffic police will not do random document checking unless the person commits traffic violation visible to a naked eye. Why this decision?

The decision was taken to avoid public nuisance caused due to random documents checking, only exception being drunken drive. Suppose police stop 100 people and check their documents, 90 per cent of them will have documents in place. So the logic is why trouble the rule abiders to catch the remaining 10 violators. I don’t want to unnecessarily harass people.

Don’t you think people will take the leniency for granted? They may be encouraged not to possess documents under the assumption that police will not check them..

I don’t think so. Because sooner or later they are going to be caught when they violate the traffic rule. In case if a person does not possess driving license, it will be taken care of at some point of time. I will give benefit of doubt to citizens and I will not question you as long as you follow the rules.

Now the only exemption is drunken drive. People often question why do you check me unnecessarily when I am not drunk. But I would ask – don’t we allow ourselves to be frisked during security check in airports every time, though we are not terrorists? Do we ever object? The same applies to drunken drive cases. We will not know whether the driver is drunk or not unless they are tested. So don’t grumble.

Recently one of the news reports quoted you saying that in accident cases, it’s important to save lives than prosecuting offenders. Police harassment is one of the reasons that people cite for not being a bystander during accidents. Do you have any plan to encourage and sensitise people to save lives?

Being a good samaritan will be easier soon

The State legislature passed the Karnataka Good Samaritan and Medical Professional (Protection and Regulation During Emergency Situations) Bill, 2016 in the last Belagavi session. The Bill aims to provide legal protection to bystanders who help road accident victims and instructs police and hospitals not to hassle people who provide emergency help. Karnataka became the first state in the country to abide by the Supreme Court ruling to protect good samaritans. The Bill which received the Governor’s nod this month has been sent to the President for his assent.

I have already given power to citizens to be a bystander with the assurance of no police harassment, but no one has used it in last three months. In a tweet on January 5th, I said that the Good Samaritan law is in force and had guaranteed of protecting good samaritans or bystanders who reach out to the aid of the victims of road accidents. No police officer or doctor shall force the bystander for anything, including asking his identity. People often say that they are harassed if they shift the accident victim. I told them to approach me if they are harassed. But nobody has turned up so far.

How else do I publicise it? I have tweeted. I have over eight lakh twitter followers and I assume a lot of them may have seen it. Publicity or lack of information is not the issue. Our perceptions are based more on hearsays, but not based on personal experiences. Of 11 million people in Bengaluru, not one person has complained about the harassment after my tweet, and I am quite sure none of the bystanders were harassed. Show me a single case of harassment and I will put the officer under suspension. I don’t think the harassment still exists. It’s just an impression of past.

Is staff shortage hurting the department? If yes how do you deal with it?

We do face staff shortage, but the issue is not manpower alone. Traffic and the policing has to be managed with the help of technology. Specially in terms of traffic policing, technology plays a significant role, it can help reduce the burden. But in India, people expect police to be visible despite technology like traffic signal and CCTV camera in place. It should not be the case where you follow the traffic signal rules only if the policeman is around, not otherwise. My challenge should be ideally not to increase manpower, but to optimise the use of technology. Technology has helped us in a big way even in crime, passport verification etc.

In the next part of the interview, the Police Commissioner talks about the most challenging type of crime that Bengaluru police face, the drug menace, of the conflicts between foreign nationals and local citizens and how prepared they are for the election year.

Locating an accident victim in Bangalore: Some lessons
Road accident: What should you do?
Road traffic accidents: a preventable disease
Top 10 accident-prone places in Bengaluru
Bengaluru now has CCTV cameras in 42 out of 104 police stations

This freedom fighter remained a fighter for fundamental freedoms all his life. Just as he opposed the CAA and NRC, he fought encroachment of lakes and discrimination of Dalits and Adivasis.

BMTC staff protest shows what a railway network can do

A tree is hacked on environment day

A tree planted by my children 15 years ago was decimated and mutilated on Castle Street, ironically on World Environment Day.