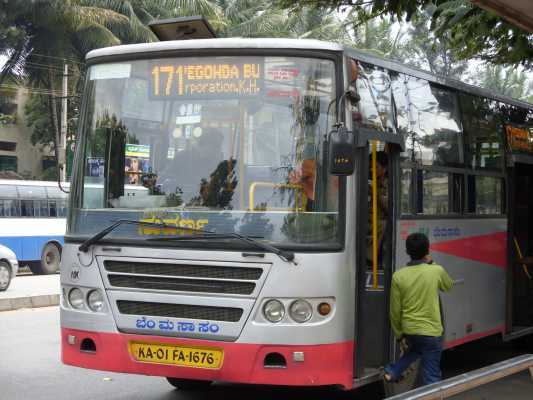 The buses never stick to timings and hence lose the faith of the commuter. File pic.

Fares on Bangalore’s public transport buses (BMTC) were hiked last month, and the reason for justifying the hike was that diesel prices and staff salaries had risen. Following protests, the public have been promised that the decision would be “reconsidered.” But as a commuter I am raising a wider issue – the obligation in a public service undertaking  to ensure that all alternative avenues of closing the gap between rising costs on the one hand and revenues generated on the other, are exhausted before the commuting public is asked to shell out more.

I take about 60 bus trips per month, and after monitoring around 380 such trips I had pointed out to the BMTC three years ago that the practice of conductors pocketing money without issuing tickets was widespread, and was causing a loss to the transport corporation of over Rs 1.2 lakhs per day, according to my estimate. I used to note down the details of route, date and time, conductor’s cash bag number etc, each time, and accumulated quite a stack of ticket stubs with these details.

Nothing happened as far as I know. My complaints to the authorities brought routine acknowledgements thanking me for feedback and assuring me that the complaint was being “looked into.”

Periodically we see news reports about the number of ticketless commuters who were caught and fined, but the practice of conductors pocketing Rs 2 without issuing tickets continues unabated to this day. One conductor even retorted that whatever goes into his pocket has to be sharedwith the higher ups, while another declared that one even had to pay a bribe to get recruited as a ticket checker.

Last week I even saw a conductor (trip and route details have been noted down and are available with me) return coins to one commuter who proffered proper change, retaining two rupees, that needless to say, went into the conductor’s pocket, with no ticket issued.

Not taking ticket is a win-win situation!

The Bengaluru Bus Prayaanikara Vedike (bus users’ association) points out that the hike in fares over the last two years is much larger than the rise in diesel prices. With the minimum fare going up from Rs 5 to Rs 6, the hike is 20%, not “16 per cent” as claimed by BMTC. The daily pass ticket has gone up likewise, from Rs 50 to 60, again a whopping 20%. The public, especially the poor who do not commute by cars or autos, end up shelling out more and more for their basic needs, while the massive ‘leakages’ remain unplugged.

I refuse to accept that it is impossible to plug these. I have never seen a BEST conductor in Mumbai’s public transport (BEST) pocket change the way they do in Bangalore, and I have also seen far more efficient checking of ticketless travel.

With fares hiked, the temptation to travel ticketless (of course, after paying the conductor his Rs 2) is greater – it becomes a ‘win-win’ situation, for the conductors and those wanting to avoid the new fares, while honest commuters who insist on a ticket get penalised, and the BMTC loses revenue.

No respect towards keeping timings

If buses kept to a time schedule, more commuters would prefer to take the bus, but  no one seems to be bothered about sticking to timings. At the Majestic terminus, drivers and conductors wait till there are “enough” people on board, before they decide to set out, because “collection” is one criteria that the BMTC imposes. How does collection increase, if I am not sure that the bus I want to take (no.364 E, for instance, which is convenient for me to go all the way from north Bengaluru to Jayanagar) will turn up at 6.45, or 7, or 7.15? If a service is not reliable, why would commuters take to the bus, despite a “Bus Day” ritual once a month?

BMTC’s performance indicator on its website says it caters to 48 lakh passengers per day. Fine – but why do they have to pay Rs 20 and 23 (instead of  the earlier fares of Rs 13 and 16 respectively) which is higher than the hike in diesel prices? Do we need a court order to tell the corporation to plug revenue leaks before turning to fare hikes?

In addition, I had a conductor insisting last week that the fare for seniors, after a 25% discount on a ticket of Rs 16, is now Rs 13. Does anyone care? Not the conductors, not the drivers, not the supervisors or administration. I often see three buses with the same number and route, turn up together (leading to ‘collection loss’) and sometimes buses with two different numbers, one in front and another at the back. All of which adds up to a pathetic disregard of commuters’ rights.

In the final analysis, it comes down to a simple matter of plain inefficiency, corruption and a callous attitude towards citizens’ entitlements. We are getting milked like cows, because the administration is not interested in plugging revenue leaks, or is unable to do anything, because the rot has gone so deep. And because the rot has gone so deep, people who would like to travel by bus prefer to use a private vehicle instead, which in turn causes a vicious circle, of low revenues leading to hikes in fares.

“Bangaloreans must demand to take their neighbourhoods back”

Entrepreneur-investor and Rajya Sabha MP Rajeev Chandrasekhar is convener of the chief minister’s ABIDe task force. ABIDe has not been able to reform the patchwork of agencies and vested interests running Bengaluru today. A Citizen Matters exclusive interview.

During lockdown, workers in Dry Waste Collection Centres (DWCCs) are dealing with hazardous waste, and are unable to segregate and transport waste on time.