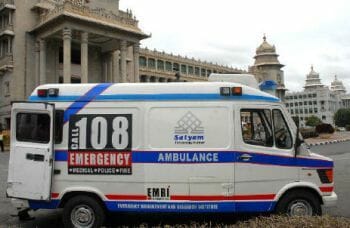 You can complain to Health Department if you find ambulances charging more than 10 rupee per km. Pic courtesy: Wikimedia Commons

Lakshmamma, a domestic worker and a resident of Anjanagara, did not know where to take her sister Shanti, who suddenly complained of severe abdominal pain during late night hours. She did not know which ambulance service to call, as a private ambulance service she found refused to ply during late night hours. Charges for another service were over Rs 3,000 for just two kilometres, to a decent hospital on Magadi Road.

Similar situation was also faced by another woman, Tara (name changed) who had to be shifted to hospital on Sarjapura Road at night. The family not only struggled for an ambulance but also for a hospital.

Such cases are becoming increasingly common despite their being sufficient ambulances in the City. But that is not it, many also complain that the ambulance does not reach the spot on time because of increasing traffic snarls. This brings us to the question, how is the ambulance service performing in the city? Where is the problem?  Are there enough ambulances for all?

There are also many diagnostic centres in the city which ply transport vehicles or mini-ambulances for their patients. These just have a stretcher in them and are mostly used to ferry patients between hospitals and diagnostic centres, executive member of PHANA and Medical Director at The Lady Hospitals, Dr Vidyananda Gurumurthy says.

PHANA president Dr A Ramadev explains that it is not possible to ascertain the number of private hospitals and diagnostic centres in Bangalore and how many of them have ambulance services. This is because they do not register with PHANA and do not share any details. So unless one does a physical recce of the city, the exact number will not be clear. This means, the number of ambulances could be higher.

However, the total number of ambulances available in Bangalore housing around 96 lakh people is around 215, going by the available statistics – that means one ambulance for around 44651 people – a figure much higher than the international standards.

International formula for number of ambulances

According to GVK- EMRI state head Jagadish Patil, the number of ambulances is decided considerin American and European benchmarks, that is, one ambulance for every 60,000 people. In India, when this service was introduced in 2006, it was decided that for every one lakh population, there should be an ambulance. In 2008, when the population of Karnataka was 5.92 crore, 517 108 ambulances were introduced of which 52 are in Bangalore.

How many emergency calls from the city?

Bangalore’s GVK- EMRI centre alone receives 250-300 calls in a day, of which 20-25 calls are during peak hours and 5-10 calls come during non-peak hours. Maximum number of calls related to accidental trauma come from areas like Nelamanagala, Hosur Road and K R Puram.

Jagadish adds that the demand and supply are calculated based on the response time taken and number of cases. In urban areas the average response time taken to reach a patient is around 14 minutes 30 seconds, while in rural areas it is around 26 minutes. The total cycle time taken by an ambulance from the time it is called is one hour two minutes- which is called the Golden Hour. This includes the time the ambulance is called for, the patient is picked from the accident site, paramedic examining the patient, taking the patient to the hospital and admitting him to the hospital.

Speaking to Citizen Matters, Madan Gopal, Principal Secretary of Health Department says: “People in Bangalore are taken care off well, they have all services available to them at any price. But the problem lies in the rural areas and in other parts of the state, where services are minimal.”

Bangalore much ahead of rest of the state

‘Strike has no effect on services’

Despite the ongoing strike by the paramedical staff and drivers of 108, there is no change in the numbers. According to S S Parveez, head of quality, call centre and marketing at GVK- EMRI: “the total staff strength in Karnataka is 2400, of which around 40% of the people are on strike (that is 800 people). In Bangalore, 30 people are on strike.”

“But this has not affected the services as we have requested private hospitals, government Health Department and even Transport Department to cooperate, by providing drivers and paramedic staff. This has been done to ensure that the services of 108 do not affect people in times of emergency,” Parveez adds.

Madan also adds that there is a dearth of ambulances, but not in Bangalore, like it is in rest of the state. There is a proposal to procure 94 additional 108 ambulances and another 200 vehicles for drop vehicle facility (a vehicle or ambulance which is used to transport patients from hospital to hospital). But how many of these will be for Bangalore is yet to be ascertained.

As per GVK- EMRI statistics, on an average, in one hour they get around 100-120 calls during peak hours (from 7pm to 9pm) in Karnataka. Most of them are of heart attack, road accidents and respiratory problems. In case of rural areas, a large number of calls are related to maternity cases. During non-peak hour, around 50-60 calls per hour are recorded which also include suicide cases.

Why the feeling of shortage?

PHANA president Dr A Ramadev adds that there are many small hospitals which have 25-30 beds. They do not have ambulances. They source ambulances either from other hospitals or from 108.

While NIMHANS is planning to construct a helipad on its east wing to meet the need of patients coming from other parts of the state, no other government hospital has one. PHANA says that Manipal Hospital on Old Airport road, Narayana Hrudayalaya hospital on Hosur Road and Fortis Hospital on Bannerghatta Road have helipads for air ambulances to land on their premises. Mallya Hospital is next to ITC Gardenia and can use their helipad for landing patients. Hosmat Hospital has an agreement with the football stadium opposite to it for a helicopter to land.

Dr. Vidyananda says that, in a city like Bangalore, where it is difficult for a road ambulance to move freely, there is no space for a helicopter to land. Major portions of the city roads will have to be cleared for a helicopter to land. Also there are a lot of clearances which need to be taken like from ATC, DGCA, government and traffic police. It is possible in highways where roads are wide and clear. It is also possible on city outskirts and rural areas where there are open fields, but not inside the city.

Heli-ambulance: No place to land!

There is a company in Bangalore which provides air ambulance services- Air Ambulance Aviation. It was started in 2007 and operates from HAL Airport. This flying ICU ferries patients from across Karnataka to other parts of India and other nations. They have helicopters and aircraft services. While one patient can be ferried in a helicopter, two can travel in an aircraft.

Speaking about it, Dr Paul, mission controller for India for Air Ambulance Aviation says, medical tourism is there in Bangalore, but is yet to grow. While on an average 14 patients air-travel from other parts of Karnataka to Mumbai, Delhi, Dubai and other middle eastern countries for treatment, only one from Bangalore uses this service, on an average.

Explaining the need for an air ambulance, Dr. Paul cited an example. A person was recently shot on Gulbarga. Though he was given basic first aid, he needed better treatment and needed to be admitted to the Critical Care Unit. “We had to airlift him and bring him to Bangalore for treatment in a private hospital. The need is rising gradually but the infrastructure needs to be improved as well. If this service is to be used in Bangalore, the patient will have to first travel by road to the airport and then be air-lifted. This increases the stress levels of the patient.”

Ambulances charge high: Is it allowed?

Director of Sanjay Gandhi Institute of Trauma Care and Orthopaedics, B G Tilak says that most of the 108 ambulances take patients to the nearest private hospitals, rather than bringing them to government hospitals. There is already a shortage of ambulances in hospitals; so when the demand increases people are forced to pay exorbitant charges to the driver and the hospital.

As per norms, private ambulances should charge Rs 10 per kilometre. But there are cases where patients are forced to pay anything between Rs 3,000 to even Rs 30,000 for an ambulance, especially during night hours.

What is an ambulance?

The major problem in the city is the increasing traffic and traffic jams which make it difficult for ambulances to travel. However, there are no statistics available with PHANA, GVK- EMRI and state Health Department officials on the patients who suffered because they did not get ambulance services in time.

opine that there are no statistics which show that because an ambulance reached late the patient was declared brought dead as stating the death of a patient in the duty of hospital doctors who do not mention records.

Jagadish Patil explains, there are some cases where patients have been brought to the hospital and the doctor has declared them brought dead. But there is no record of the number as it declared by the hospital doctor. They are not recorded in one place.

Looking at the traffic in Bangalore, the state government in the last budget had proposed to introduce air ambulance service to cater to the elite and place Bangalore better on the aviation and medical tourism maps. However, beating the traffic and reaching the helipads, and budget to buy helicopters / aircrafts and equip them with all facilities, providing adequate helipads and airstrips – play a vital role in the process.

Explaining the case of head injuries in case of accidents, Dr V L Sateesh, Medical Superintendent of NIMHANS says that it is a misconception that incase of all head injuries the patient should be brought to NIMHANS only. There are other well-trained neurosurgeons in Bangalore, practicing in government and private hospitals. Instead of wasting the crucial Golden Hour in traffic jams, the patient should be taken to the nearest hospital first and given basic treatment. After this, based on the requirement the patient can be brought to NIMHANS. Time is crucial, he adds.

Where to complain if you are charged extra?

Reacting to the cost and service of ambulances, Madan Gopal says that all hospitals and ambulances should function as per the prescribed medical norms. If people find any violations they should bring it to the notice of the Health Department. They should email their grievances to prs-hfw@karnataka.gov.in, with all details, including name of the ambulance service, vehicle number, driver’s name, time of calling, place of pick up, which hospital the ambulance was taken to and how much was charged. And if possible, the name of the doctor. The complainant should furnish his/her details – name, contact number and address. Action will be taken against the erring driver and the hospital.

They can even call up 080- 22255324 to the office of the Principal Secretary, Health Department, Government of Karnataka.

What is the cost of an ambulance?

A BLS ambulance has all medical instruments, all medicines and apparatus. While an ALS apart from having all basics, also has a ventilator and defibrillator.

As per the medical norms, an ambulance should have a resuscitation instrument, ventilator, oxygen cylinder, IV fluids and a stretcher. There should also be a doctor, a nurse and a medical attendant, apart from the driver.

A weekend drive to Ramanagaram, the silk city

Bal bhavan has revised their summer camps this year to introduce classes like Sanskrit and Yoga to revive the traditional culture and also subjects like Animation to be at par with times.