On hearing a commotion outside the house a little while ago I looked out of my office window and, to my horror, saw a car apparently driving straight into an auto – a policeman who was between the two vehicles managed to save himself by jumping aside in the nick of time. A huge crowd gathered immediately and many irate individuals were shouting at the driver and trying to get him to get out of the car. Afraid of what might happen if they did manage to get hold of him, I went out and appealed to the few policemen who were, surprisingly, on the spot (in a residential area!) to not let any violence take place. They clearly thought I was a nuisance.

The thin, young driver was finally extricated from the car and the crowd, which was quickly morphing into a mob, began moving him forward. By the time I got to him he was bare-chested and had only his underwear on (I don’t know when his clothes were removed and by whom – I assume he wasn’t driving around in his underwear). He also had blood on his face. Again I made a general appeal, saying please don’t beat him; let the police take him to the police station and book a case and whatever else they are supposed to do. Someone had a wire with which they were presumably going to tie him up. I pulled the wire away. Nobody seemed very pleased about my interference. A couple of guys tried to tell me that he was a terrible fellow who had hurt or killed a hundred people (I refrained from asking how they knew the exact number). Several others more or less told me to mind my own business. The police men were also not very enthusiastic (to put it mildly) about my attempts to intervene.

Anyway, fortunately, no lynching happened and it seemed like the chap had been put into an auto and taken somewhere – to the police station, I assume (dare I hope that he’ll be safer there?!). Some senior police officers turned up, got the crowd to calm down and disperse (eventually, reluctantly), apologised to us for the inconvenience of the abandoned car blocking our gate – as if that was our primary concern! – and, after a while, got the vehicle towed away. Peace was finally restored in the neighbourhood. 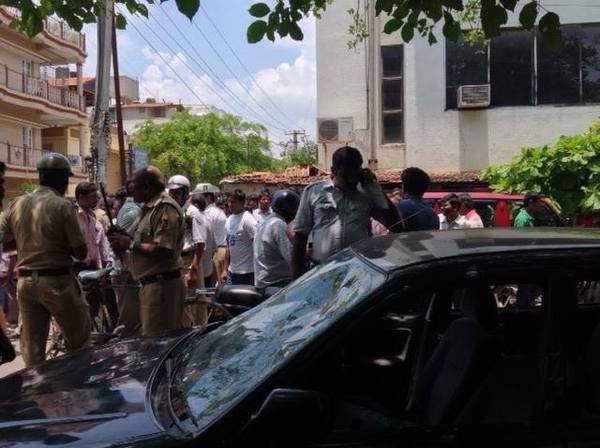 The scene of the incident after the car’s driver had been spirited away. Pic: Ammu Joseph

We were told that the chase had started somewhere in Adugodi (near the Forum Mall, apparently) – he had reportedly been driving like a crazy man, mowing down several people and even hurting or attempting to hurt a policeman. I suppose that explains the presence of a surprising number of policemen right from the beginning. The car was certainly in bad shape. I don’t know when and how the windshield was smashed and I assume the window on the driver’s side had been broken in the crowd’s attempt to get him out of the car. But the vehicle was also scratched and dented all over, suggesting that some reckless driving had taken place.

The disturbing thing about the whole incident was that nobody – neither “the people” nor the police – seemed to think there was anything particularly wrong with a “bad guy” being pulled out, threatened, manhandled, roughed up, etc. They clearly didn’t think there was anything wrong with mob justice. No lynching happened this time, thank goodness. But the lynch culture was certainly in evidence. And that can’t be a good thing.

No lynching happened this time, thank goodness. But the lynch culture was certainly in evidence. And that can’t be a good thing.

About Ammu Joseph 2 Articles
The author has not yet added any personal or biographical info to her or his author profile.

Am I paying taxes to get killed?

Bengaluru is beset with rotting garbage, killer potholes and increasing dengue cases. Yet the BBMP is planning a steep hike in property taxes. So should we pay?

In conversation with a practicing Naturopath

An interview with a Bengaluru-based Naturopath tells us how the human body can be healed if it is aligned in harmony with nature.

COVID Advisory: Ensuring children are cared for, in our absence

Even though it is hard to think of one’s own mortality, times are such that it is better to leave one’s child/children prepared for such an emergency.