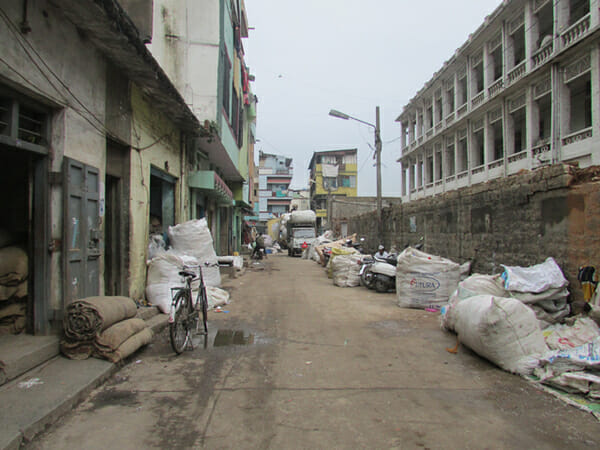 Plastic waste from across the city is collected at Jolly Mohalla, before it undergoes recycling process. Pic: Akshatha M

Abdul Khader, a middle-aged man, owns a modest plastic waste collection centre in the narrow lanes of Jolly Mohalla. Amidst the bunch of scrap dealers spread across this famous location close to K R Market in Bengaluru, Khader established his shop 25 years ago.

For him and his three employees, the day starts at 4 am. Kabadiwalas and ragpickers throng his shop early in the morning carrying plastic waste from across the city. “I buy these plastic cups and plates for Rs 6-7 per kg and sell it to recyclers for Rs 8-10 per kg,” he says. He receives 700 kg to 1 tonne of plastic waste everyday. 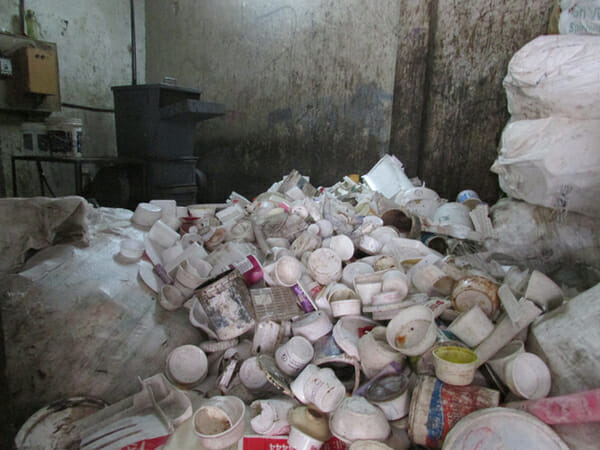 Plastic cups and boxes dumped in a plastic collection centre. These items are cleaned and dried before they are recycled. Pic: Akshatha M

While Abdul Khader mostly collects used plastic cups and plates, another shop adjacent to his, collects only plastic covers. In tens of plastic waste collection centres in Jolly Mohalla, the owners and the workers are religiously involved in the business of collecting plastic waste for several decades now. For each variety of plastic waste, right from plastic cover to sheets to boxes and buckets, there are shops exclusively meant for the purpose. 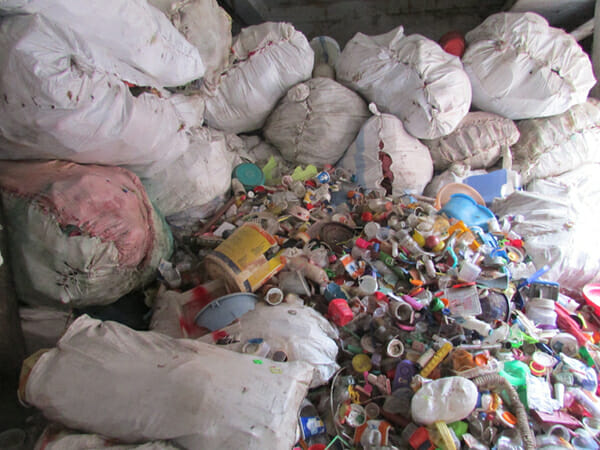 All types of plastic, be it carry bags, cups or spoons are recyclable. Plastic waste is stashed in bags in order to transport it to recycling units. Pic: Akshatha M

Once the day’s goods are piled up in front of their shops before the dawn, the workers begin the herculean task of segregating plastic waste. After sorting out useful plastic materials from the unwanted waste, they transport it to the recycling centres located in Nayandahalli. Lives of over 1,000 people in Jolly Mohalla is completely dependent on the plastic waste trade. It is an informal sector unlike the formal dry waste collection centres set up by BBMP.

A hub of plastic recycling

A few kilometres away, right behind the newly inaugurated Metro station at Nayandahalli is  Muthachari Industrial Estate. As you stroll around in this area, you will find nothing but plastic recycling factories. It is run by families that are largely dependent on the plastic recycling business. The dry plastic waste from Jolly Mohalla and other parts of the city reaches Nayandahalli, where plastic is recycled. 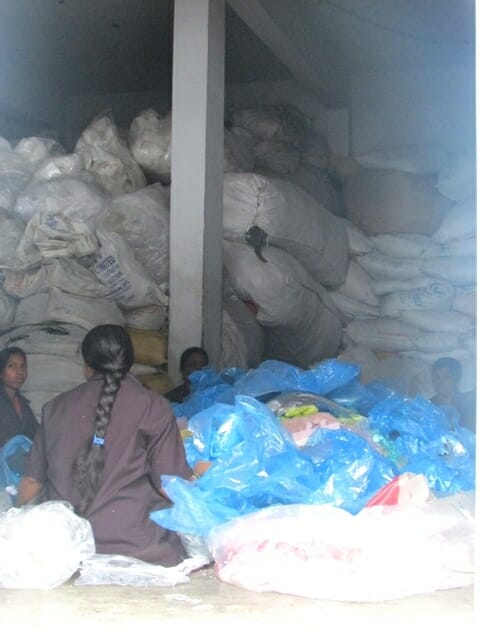 There are two types of factories here. Some establishments accept waste plastic materials from informal waste collectors like those from Jolly Mohalla, melt them, prepare granules and sell it to plastic-based product manufacturers. A few industries accept waste plastic directly from big companies like Reliance stores and Toyota Motors, recycle the waste and produce buckets, boxes and roof sheets.

Several families including factory owners as well as labourers, most of them hailing from North India, have settled in this crowded area in Nayandahalli and their lives revolve around plastic recycling. In a small recycling factory owned by Madan Lal, recycling takes place briskly throughout the day. “We don’t keep stock of waste plastic. Whatever waste arrives will be recycled on the same day, unless there are power cuts,” he says.

Used or waste plastic recycling is not the entire core of the plastic industry — there is another category — the producers of virgin plastic. Of over 500 registered plastic industries in Bengaluru, most are located in Peenya Industrial Area. They are the source of plastic goods that arrive in the market. 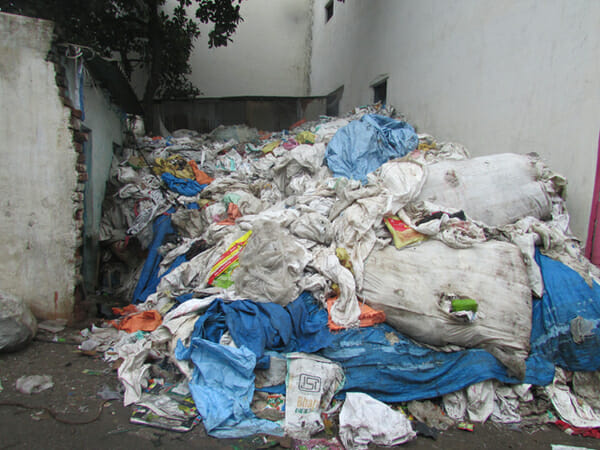 The State government’s recent move to ban certain types of plastic-based products has sent chills down the spine to plastic-based industries.

The move has not gone down well with those involved in the plastic industry. While plastic manufacturers backed by a powerful association are aware of the notification and have raised objections to the proposed ban, those involved in the informal sector do not have slightest knowledge of the development. In Jolly Mohalla and Nayandahalli, the shop owners and workers were taken by surprise to hear about the proposed ban from this reporter.

They are all worried about the alternative source of livelihood. Sulaiman, who owns a plastic carry bags collection centre in Jolly Mohalla, says plastic collection is his family business. “We are seven members in our home and the family is entirely dependent on this business. What should we do if we stop receiving plastic?” he asks. 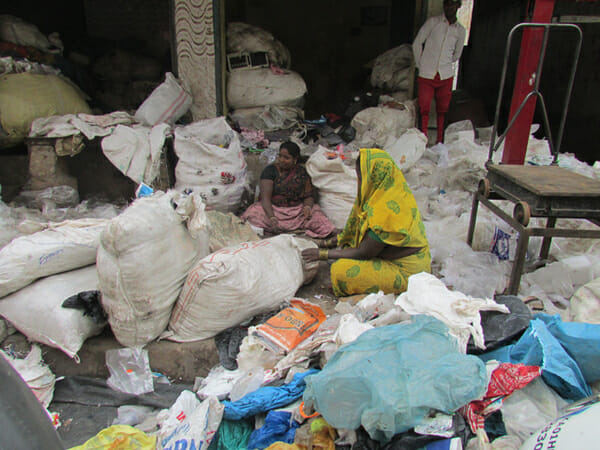 For these women their job at plastic waste collection centre is the source of livelihood. Pic: Akshatha M

A large number of women are working in plastic industry, be it in waste plastic collection centres or manufacturing units or in recycling factories. For Shanthi who has been working in a plastic recycling centre for last 33 years, it has been her sole source of income. “I have looked after my home and raised my children with the money that I earn in this factory,” she says. 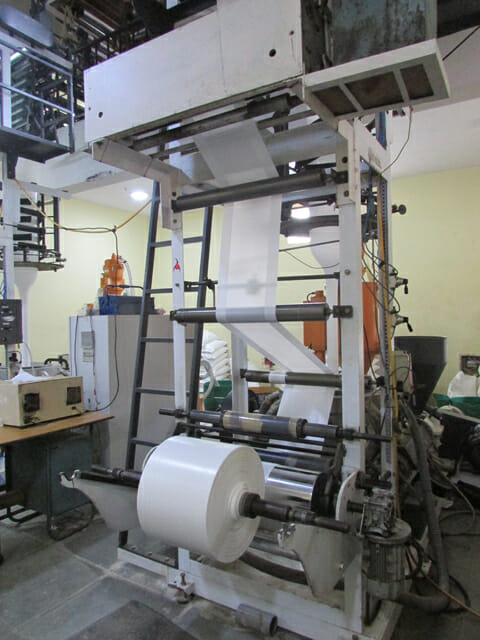 Plastic carry bags are manufactured in one of the plastic industries in Peenya Industrial area. Pic: Akshatha M

Kavyashree Plastics is a plastic manufacturing industry located in Peenya Industrial Area. This unit has 24 employees and produces plastic carry bags for various companies. The unit has 4-5 plastic carry bag manufacturing machines each costing about Rs 50 lakh. “These machines will not be of any use if the plastic covers are banned. We can sell them as scrap items and each machine will not fetch us more than Rs 1-2 lakh,” says Basavaraju, supervisor of the factory.

A plastic recycler in Peenya, Ashwath Narayan too echoes the same sentiments. He runs a small factory unit with two machines to recycle waste plastic. “Of all the plastic reject that I get, majority is plastic carry bags and sheets. If it stops arriving to my unit, I will have to shut down the factory,” he predicts. His only worry is the livelihood. “What next?” is the question that remains unanswered.

Same is the worry of employees working in plastic factories. All that Kamalesh, who has been working in a plastic recycling factory in Nayandahalli for over 10 years, knows is to work efficiently at a plastic factory. “I am quite skilled when it comes to these machines. We are all getting a good salary which is enough for us to sustain. We just wonder what should we do if the factory closes,” he adds.

According to the information available with the Karnataka State Plastic Association, the total number of industries registered with KSPA is 648 in Karnataka. It includes plastic manufacturers, processors, mould and die makers, traders and associated vendors.

The Rule, if introduced, is expected to create large scale unemployment. The annual production of plastic industries in Karnataka is anywhere between 12,000 to 15,000 tons. Going by an estimation, nearly 25,000 people are directly employed in plastic industry and over 75,000 people are indirectly dependent on it. The figure excludes unorganised sector dependent on plastic trade, including rag pickers, plastic waste collectors and small recyclers. 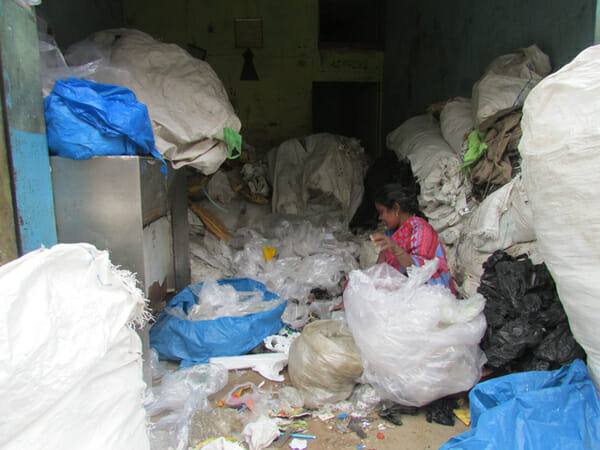 A woman works at one of the plastic waste collection centres in Jolly Mohalla. Pic: Akshatha M

Naturally, the government’s move has stirred up a hornet’s nest. The plastic manufacturers, who make a powerful body, have questioned the power of the State government to introduce a rule when the Central government’s Plastic Waste (Management and Handling) Rules, 2011 is already in force.

Karnataka State Plastic Association President Vijay Kumar V told Citizen Matters that the government’s decision is in violation of Section 5 of the Environment (Protection) Act, 1986. Section 5 of the Act gives power to the Central government to issue directions to any person, officer or authority for the closure, prohibition or regulation of any industry. He says that going by the Act, the State can take a decision on closure of plastic industries only upon Central government’s directive.

“The existing Central government rule on plastic management, bans the use and sale of plastics below 40 micron. The State government and the authorities concerned have failed to implement the ban in letter and spirit. None of the registered plastic industries are producing plastics below 40 micron, but the thin plastics are easily entering the market from neighbouring states and from unorganised sector. Why don’t the authorities take action to curb it?” he asks. 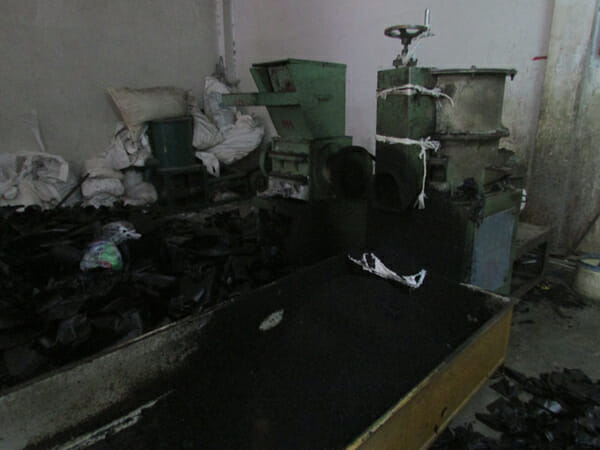 Plastic waste is recycled and granules are made in a recycling unit in Peenya. Pic: Akshatha M

‘Ban is not a solution’

Further, he criticises the BBMP authorities for not paying heed to the Association’s request to open kiosks in various points of the city to collect used plastic. “We have submitted proposal to BBMP several times in the past requesting to open plastic collection kiosks in every ward, residential and commercial areas for collecting waste plastic materials. The Association is ready to collect such plastic under extended producers’ responsibility, and hand it over to recyclers. But our request was never considered,” he says.

Arguing that banning plastic is not a practical solution to the impeding problem, he says there are no success stories of plastic ban in any city in the world. “In the absence of an effective substitute for plastic, how can plastic be banned at all? Paper bags cannot be an alternative for it requires cutting of huge number of trees. Jute is not sufficiently available. The ban cannot be enforced until and unless a better substitute which is as comfortable and convenient as plastic is invented,” he says.

He demands that the authorities strictly implement waste segregation at source in order to solve the problem. “Having failed in their duty to manage waste, they are now trying to make plastic manufacturers responsible for the chaos. Plastic will not cause any problem as long as it is segregated and recycled properly,” Vijay Kumar adds.

Canara Plastic Manufacturers’ and Traders’ Association President B A Nazeer wonders how the government has suddenly taken a decision without making a scientific study on the effect of plastic. “The Central government took three years time to form a committee and examine, before increasing the permissible limit of plastic from 20 microns to 40 microns. How could the State government make such a move without understanding its pros and cons?” he asks. 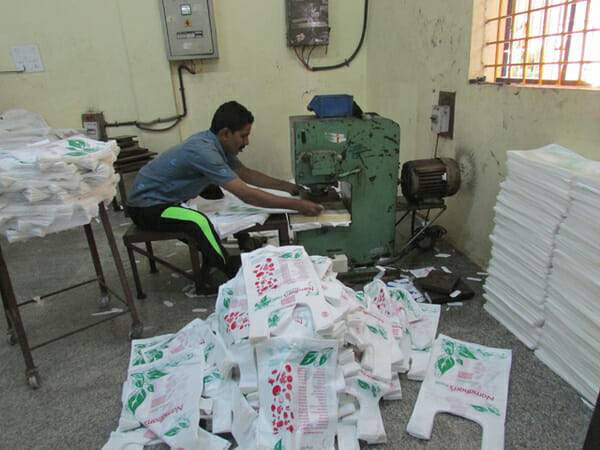 ‘Who will repay the loans?’

Vijay Kumar says that plastics industrialists have borrowed loans of upto Rs 4,000 crore from various banks and nearly Rs 10,000 crore loan from informal sector. “Will the government waive our loans if the industries are shut or will it help us with alternative business?” he questions.

The draft notification exempts the production of certain types of plastics including those used in nurseries, dairy industry, health sector etc. It also excludes the plastic produced for export purpose. Vijay Kumar says these exemptions will not help majority of the industries, as they are mostly engaged in manufacturing banned products and production for export purpose is not more than 5 per cent.

With the sword of Damocles hanging over their head, the manufacturers have submitted their objections and suggestions to the Environment Department in response to the draft notification. Plastic manufacturers have indicated they will put up a legal fight if the government does not respond to their inputs. “We will approach the court, if the government bans plastic products above 40 micron,” Vijay Kumar says on behalf of the fraternity.

Why the apprehension about plastic ban? Has the ban been implemented elsewhere in the State? What are the challenges that those cities faced? Coming up in the next article in the series.

File your objections or suggestions on plastic ban before Nov 27, 2015
Sanjay Nagar shopkeepers stop giving plastic carry bags, launch ‘Rent a Bag’
Plastic can be dangerous in many ways
Plastic producers vow to help enforce ban on plastic below 40 microns

Are informal workers in any better state this lockdown?