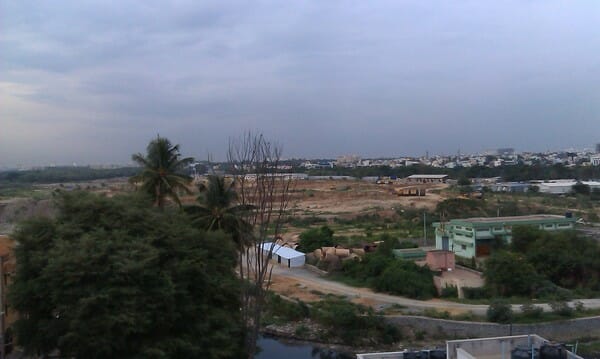 The High Court of Karnataka on Monday, October 21, 2013, accepted the Public Interest Litigation against the Mantri developers and Coremind Software and Services along with other nine government departments. A bench comprising Justice K L Manjunath and Justice H S Kempanna directed that the defendants be served notices.

Namma Bengaluru Foundation and Citizen Action Forum along with many resident welfare associations in and around Agara lake in south Bengaluru had filed a Public Interest Litigation (Writ Petition 36574/ 2013) on the Special Economic Zone (SEZ) project by Mantri Developers, coming up on Bellandur wetlands. The petitioners filed the PIL against the state government, related agencies and private developers.

In late March, Citizen Matters, along with Suvarna News 24×7, had broken the original story on the environmental risks of the project and the water clearances given to the project.

Secondly, according to KIADB Act, ‘Industrial infrastructure facilities’ that it allots land for, are those that ‘contribute to the development of industries established in an industrial area’. But in this area there is no need for developing residential, commercial and hospitality facilities, as there are enough such facilities in the area. Also the area is ecologically sensitive because of Agara lake nearby. KIADB should have acquired the land only after confirming that there won’t be any damage to ecology, says the petition.

Encroachment of the Rajakaluve

Using revenue maps of the area, the petition goes on to indicate the encroachment of Rajakaluves (inter-lake drainage channels). Google satellite images that have been taken from the year 2000 till 2012 clearly show that storm drains have been shockingly encroached upon and covered up by construction. This affects water flow to Bellandur lake. It is a violation of the KIADB plan sanction condition that storm water drains and natural valleys should not be disturbed, highlights the petition.

As a follow up to the original expose of March, Citizen Matters had blown the lid off this issue also, in May. To read the report, click here. The report by Navya won the Indo-german All India Environmental Journalism Award.

SEIAA had made it mandatory for the project on paper as well as during construction to leave a buffer zone of about 30+16 meters from the Rajakaluve. Also it was to be constructed above flood level as the project lies in a valley zone, between two big lakes – Bellandur and Agara. However, the KIADB and SEIAA failed to monitor the most crucial aspect of the project that could lead to flooding of the nearby areas.

SEIAA had asked Manipal ETA to submit a document showing that the project was in proper slope and high flood level even though the project is located between 2 lakes. However, Manipal ETA is effectively self-certifying, which shouldn’t be allowed, says the PIL.

The state government should not have allotted this land for industrial purpose when BDA had marked it for residential and public utility purposes in its RMP-2015, unless there was an overwhelming reason, argue the petitioners.

The PIL also quotes the minutes of the proceedings of the SEAC meeting in September 2007, where it says that “The Principal Secretary, PWD noticed that the area is earmarked as residential as per the BDA master plan and hence the project should not be permitted. He informed that the BDA/ BMRDA Master Plans project is prepared by the Government and we have to adhere to the Master Plans.” However the project was approved in the same meeting itself, says PIL.

The PIL says that the Mantri project is using the approvals it got from Karnataka Udyog Mitra (KUM) to surpass other mandatory environment and BWSSB clearances. It goes into the specific case of BWSSB’s controversial NOC, which the body had given to the developer on a plan for two apartment buildings, without any idea of the massive SEZ coming up in the area. (To read this Citizen Matters report, click here.)

The 76th SEAC meeting minutes also show that the project has car parking facility for 14,438 cars. There is no clearance from Bangalore Traffic Police for this. This will cause more congestion in already congested Koramangala area, notes the PIL, and produces the relevant traffic study data. Citizen Matters had covered the traffic impact aspect of the project in May.

On failure to procure documents of clearances, SEIAA meeting of November 2012 had denied permission to Coremind Software and Services, the second private interest involved in the SEZ case. However, the Coremind is continuing construction, says the petition.

‘Real estate in guise of SEZ’

The petition explains how the land meant for agriculture purpose is acquired by the government and given to industrial purposes, which in turn is used for residential purposes by the parties that purchased the land at very low prices from government. Real estate development need not come up in an ecologically sensitive area, argue the petitioners.

The PIL goes to assert that the state government and KIADB did not consider the environmental consequences before acquiring land for the project. Land marked in RMP for residential and public utilities shouldn’t have been used for industrial purpose. KIADB should have had overwhelming reason to override the powers of BDA, which has not been demonstrated in this case, explains the petition.

The petition prays to the High Court of Karnataka that the projects be stayed and the parties (developers) be restrained from creating any third party rights or encumbrances on the said property. It prays that the court order reclamation of the land allotted to both the projects coming up on the ecologically sensitive Bellandur wetland, and restrain government and KIADB from allotting this land for purposes that may harm the environment. It also prays that orders be passed to restrain the government from alienating public land without following due process of law.

Citizen Matters will continue to track this story.

Women are a majority in BBMP council: will they shine this time?

They face the criticism of not talking in BBMP council, while not being available over phone to the citizens of their wards. This time they outnumber men corporators in BBMP. What to expect from women corporators in this council?

Inviting you to a workshop that will look at water reality and solutions, including rain water harvesting, groundwater recharge and grey water reuse. On Sunday, December 6th at Redwood apartments off Sarjapura road.

‘Process or shut shop’: people give ultimatum to composting plant

Fed up of apathy of officials towards managing composting plants belonging to KCDC, residents in the area have come together to warn the administration and to take up legal fights to ensure the composting process in the plant doesn’t trouble people.