This is a story that has passion, action, drama, blood (well, not blood really, but it seems like people are baying for our blood), sweat and tears! Sounds like a Bollywood potboiler? Well, that’s the Durga alarm story for you. It is nothing short of a potboiler, with multitudes of characters, plots, sub-plots and plenty of action.

The humble beginnings of the Durga alarm

The story quite literally started in 2014, when the first thoughts took shape and it developed, slowly and painstakingly over unlimited cups of tea and brain-storming sessions. Almost 90% of the women who attended our workshops said they felt the most violated on a bus.

A few factors play out well for the perpetrators in a bus scenario –  the crowd (one can grope, touch, pinch and do whatever else, and blame it on the crowd), a woman’s fear (most women don’t raise an alarm only because they fear that they might be judged by the other commuters or what if they are targeted by the perpetrator again for shaming him in public?), and there is no mechanism for raising an alarm in the true sense!

This is where we entered with a box like contraption which contained a simple alarm system. What if there were switches on the sides of the bus that anyone could reach and press in case of an untoward incident. This switch would be connected to some lights and sirens which would go off so loudly that everyone near the bus, inside and outside, would know that something was amiss and rush towards the bus to address the situation! How is that for active citizen engagement? 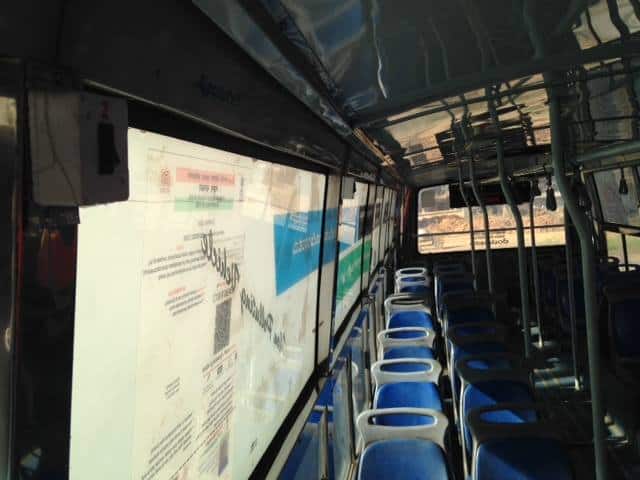 All it takes is to turn it on the switch to report harassment. Pic: Meera Vijayann

Every citizen has a role to play in this situation. Remember, Durga is about bringing about a change in behaviour in society. We want everyone to be responsible for the safety of others. Tall order? Not at all! In fact it is the simplest thing anyone can do! Okay, I am digressing here. Let’s get back to the alarm! There’s lots more to cover.

So, after repeated meetings and many litres of tea, we managed to get a group of college students to execute the alarm design. Since none of us were technically literate, communication was a huge hurdle! We would say, put switches on the sides of the bus and they would ask us do you want circuit breakers too! Now what on earth are those? And we would say okay, whatever suits you and they would huddle up for a few days and come back to us and say, your design doesn’t permit XYZ circuit boards, we will need ABC type ones. And we would want to sound like the bosses, so we would say, go find circuit boards that would be better than ABC type ones! And they would huddle once more and come back to us once more! So this huddling, checking, planning, devising took over six to eight months and then one fine day, it was ready! In the shape and form we had imagined it, and in the shape and form we thought was best.

The next step was to get it checked by technical experts and then take it to the BMTC. Again, we sat through hours and hours of meetings with practically everyone who was recommended to us. We trudged through the length and breadth of the city lugging this bulky device with its large battery and multiple wires criss-crossing the box.

Those were heady days too! We would get a call at 10 am on a weekday, to be told to meet someone in Whitefield by 11! Anyone familiar with the geography of Bengaluru will tell you, you are nuts; you cannot possibly reach Whitefield in an hour from anywhere! But we would! We would crawl through painful traffic and quite literally charge into the meetings at 11 sharp!! Ultimately, these paid off and we managed to grab the attention of BMTC!

“BMTC buses are safe for women”

Now, here’s where the plots go into sub-plots and the drama gets intense. We were asked to meet with the BMTC MD and explain our alarm to her. All was hunky-dory till we asked for buses to put the alarms in! Till then everyone patted us on our heads like indulgent children and said, yes, we did the right thing, yes, this was the need of the hour, yes, we were addressing a huge lacuna in the system, etc etc. But when it came to brass tacks, everyone froze!

What? You need buses? For what? Why? Our buses are safe for women! Who told you people get harassed in buses? This device is too crude. What if the bus meets with an accident? Whose fault is it? Our staff doesn’t need yet another workshop! They have all been through gender-sensitization workshops. And it went on and on and on……

At this point, usually people give up! But not us! This made us even firmer in our decision! We held our ground stubbornly and more fiercely. We went from pillar to post and finally convinced BMTC that we would do a pilot on a few buses for three-months and if all went well, BMTC would then consider scaling this to more buses. Hurrah! High fives!

Finally, after more running around and more meetings and more litres of tea, we managed to get the alarms on five buses and it was flagged off on February 7th 2015 from Yelahanka Satellite bus depot! BMTC chose at the last minute to not put any of the posters or signages about the alarm on the buses. We reconciled with the thought that maybe BMTC would eventually put them up! How else would the commuters know if there was an alarm or not? Then came another shocker. BMTC would not call them Durga Alarms.  Initially, we felt like we had been punched in our face; after deliberating what exactly our agenda was, we decided that the alarms were important, not what it would be called.

We received a lot of acclaim and media coverage for the alarm. Many papers reported our work and lots of TV channels carried our story in their channels. We were becoming celebrities in our own right. Transport Minister, Ramalinga Reddy, who inaugurated the alarms, was very impressed with it. While he was a pillar of support every step of the way, eventually, we also realised that his scope of influence ended where bureaucracy began! This was turning out to be a bigger circus than any of us had even remotely anticipated.

Post the launch and the fanfare, we were scheduled to meet with the BMTC MD to plan the next steps. Here, we were asked to apply for certification from four agencies in the country who certify automotive parts. A new twist to our tale…

We jumped in with all guns blazing, only to be told after seven months of follow-up and frustrated calls, that our alarm couldn’t get a certificate. The reason being, we were the first to come up with safety alarms in public transport! That’s good news and bad! The good news is obvious; we were the first to device this. The bad news? The agencies didn’t know under what category they could certify us because it was the first of its kind! Another reason for not being able to get the certificate was that the electronic component of the alarm system stumped them. How can they certify electronics, they asked.

So, here we were back on square one, stuck at a juncture where no one was willing to help. In the meantime, we had changed our vendors to an organisation that knew electronics better and who could deliver a more sophisticated piece of equipment. We created a consortium of stakeholders who were willing to fund the alarm systems, manufacturers who could manufacture it in bulk and at a lower cost, and designers who could improve on the design and technology.

In fact, where we are today, we don’t need any public funding too for this project. There are companies who are willing to put their CSR money to good use. We just need buses! But all of this is standing at the seeming dead-end.

At this point, we have had multiple NGOs and well-wishers backing us at meetings with the Minister and BMTC. But at each of these meetings, we are repeatedly asked for certification and to prove that harassment in buses is real! BMTC MD believes that her buses are the safest and yet, she is investing a lot into putting up CCTV cameras and ‘high-end safety apps’ that will notify people about the route a commuter is taking. Frankly speaking, if my husband is on the caller list of notifications for the routes I am taking on a bus, he’d block my number on his phone! It would be so annoying to keep getting updates about where I was going every few hours.

I understand a helicopter mom liking this app, but imagine the frustrated girl who knows she is being tracked at every step. And my question to the developers is, what happens when this girl gets groped? Who would know? How soon can they respond and act on it? And will the perpetrator get the desired punishment?

The same questions crop up when I am told about CCTV cameras. Who is watching the footage? Can they make out the subtle, yet grotesque rub on our backsides? And if they do, what’s the course of action for the perpetrator? Will they be able to identify him among a crowd? Will they punish him for his unwarranted touching? Who will take the necessary action?

Every year, more and more women are stepping out of their houses to pursue their careers and dreams. And with this, is the growing number of harassment they deal with. With the Durga alarm, a woman can breathe a lot easier knowing that she has at her fingertips, the power to raise an alarm against unsolicited behaviour. She can sleep better knowing her daughter can travel at any hour of the day or night in public transport without fear. She can recommend public transport to her near and dear ones, knowing fully well that each bus is equipped with citizens who will take an active role in protecting their fellow passengers against untowardly behaviour.

We are now trying to gather support from everyone who feels that buses need the safety alarm and we have launched an online petition to gather that support. Click here to sign the petition.

I urge you to please take this petition seriously and pass on the word about the need for safer transport systems.

About Meenakshi Giridhar 3 Articles
The author has not yet added any personal or biographical info to her or his author profile.

Bengaluru’s own public transport system, BMTC has plans to launch many progressive steps to ensure commuter safety and user-friendliness. BMTC Managing Director Ekroop Caur explains the plans in an interview.

Moshpits do the talking at Deccan Rock

City metal heads became a part of history as they witnessed India’s first ever international metal festival on climate change, by default.

The Bangalore Bird Race is on Sunday, January 20. More than 250 teams have registered for the event so far. Deepa Mohan participated in last year’s race and says there is much to look forward to.