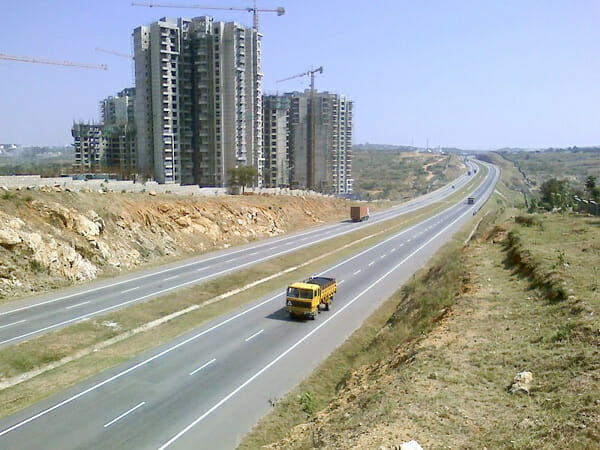 When the alignment of around 50+ kms of the proposed road is more or less the same as NICE road, BDA has to construct only 60+ kms, not 110 kms as projected. Pic: wikimedia commons

Why should the Peripheral Ring Road cost 4300 crores, and why should Japanese agency Japan International Cooperation Agency (JICA) be funding it? The toal length of the project is about 110 km, of which 50+ is unnecessary, because the western half of the road is more or less identical to the NICE Road which has already been built. So what we really need is road construction for 60+ km, and at about 9-10 crores a km, it should cost no more than 650 crores.

Where is the rest of the money going? The answer is ‘land acquisition.’ Tons of people own the land on which the road is proposed to be built, and the government is currently in the process of trying to notify and buy up the land needed for the road corridor. Three-fourth of the money is for this activity.

However, is land acquisition necessary? Most of the Ahmedabad Ring Road was built without land acquisition, and at less than 1/4 of the cost per km that Bangalore Development Authority is projecting for PRR. Moreover, that project not only built the road, but improved a lot of the infrastructure in the vicinity of the road. If all that can be done for so much less money in one state, why not in Karnataka?

Moreover, the way Gujarat did the project is the legally right way too, conforming to the Town Planning Act (it’s called ‘land reconstitution’). Our government is so used to the land-as-political capital exercise that even after taking  missions to Gujarat by several top officials of BDA, we continue with the same old junk – dispossessing farmers at low prices, gifting that land to speculators, making money in denotification scams, and building a road without any regard for what’s around it.

And why does JICA want to finance this racket?

Reconstitution works like this. Let’s say you are doing a project. It could be anything – making a new road like the PRR, or widening an existing one, or even much bigger things like making a whole new layout in a newly urbanising area. In each of these cases, there are some private property owners whose lands are in the spaces where we want to put up roads, pipes, pumping stations, transformers, etc.

The usual practice of the socialist state was to simply identify the properties falling on these ‘needed’ places, and simply buy them out using the compulsory acquisition process. This is unfair – because one set of people lose property, but others behind and around them get all the gains. It is costly – the state has to come up with the money to buy out all these properties. It is also slow – many home owners go to court, others get their properties denotified, which forces plans to change, etc.

Reconstitution recognises that for any project there is a much wider ‘zone of benefit.’ So, if we make a 75 m PRR, on either side of that road for about half a kilometer, property values will jump. All those nearby properties are getting the benefit of new infra, without contributing one paise to the project.

Therefore, what good town planners do is that they treat the entire zone of benefit as the target area. In this area, they compute the total amount of land needed for ALL the new infra (roads, side roads, drains, and much more), and work out the percentage of the total area taken up by the new infra. This usually comes to about 11%. Then they add another 2% for their efforts, totalling 13% of so. And within the zone of benefit, ALL PROPERTY OWNERS LOSE 13% OF THEIR PROPERTY, and the rest of the land is reconstituted among the owners, so that each gets his balance 87% or so.

This is extremely doable in unbuilt areas, and even works well. All properties end up getting connected to new infra, and the plots are all made rectangular in shape. The entire area gets improved as a result. Until such improvement is made, the town planning authorities keep the permitted FSI very low, which gives owners an incentive to participate in the scheme to raise their building rights. Even in semi-constructed areas, the schemes can work, with some diligence and modifications.

If the PRR were built like this, it would cost 650 crores, and those who already have the lands in those areas – including small farmers – would benefit. No money would be needed for acquisition, but only for road building itself (about 1/4 of the cost, max, even with all the side infra). BDA could end up with 2% of the land free to itself, to develop afterward for large developments.

But the way it is going about it now, everyone who owns land already is either dispossessed or favoured out through denotification, these lands are transferred from poor farmers to rich speculative buyers, and no part of the area other than the thin slice of road gets developed. Naturally, people object, go to court, etc. which is why even 10 years after it was mooted there is no sign of the project actually taking shape.

The Town and Country Planning Act requires that any developed area should be formed through a town planning scheme. In 55+ years of its existence, the Karnataka planners have not executed even one such scheme. BDA’s master plan is very much like the splash of colours that your children can create on a canvas by simply throwing paint around. But behind that madness is a very cunning and disgraceful scheme – nothing more than a land grab that uses the law as an instrument of crime. And JICA is the moneylender that stands ready to grease this pole.

About Ashwin Mahesh 17 Articles
Ashwin Mahesh has been involved in public policy for Bengaluru through his work with the Karnataka government. The views expressed here are his own. He is a member of the Lok Satta party. He is also CEO of Mapunity Information Services, and a director at Oorvani Media, publisher of Citizen Matters and India Together. He is also a visiting faculty with the Centre for Public Policy at IIM Bangalore.

With some garbage disposal contracts cancelled (though the formalities are pending), BBMP is floating new tenders. 12 other tenders already approved have not been issued work orders due to the code of conduct.

Iblur lake near HSR layout has been contaminated with sewage water from nearby apartments. Fish are dying because of this affecting the livelihoods of fishermen who use the lake.