Yadav has been transferred to Karnataka Public Service Commission (KPSC) as Secretary. The order does not mention a replacement for the position vacated by Subodh Yadav. Here is the full transfer order.

‘Bring back Subodh Yadav’
There is an online petition floated asking the Government of Karnataka to bring Subodh Yadav back as Special Commissioner, to continue what he was doing.
It is not clear why Subodh Yadav was chosen for the responsible post of Secretary, KPSC, when he was working on many important issues in his current posting. Subodh Yadav did not respond to phone calls made to understand his reaction to the transfer.
Why the petition? “We don’t care whether he got a better post or he wanted the tranfer himself. It’s not about his personal choice. It’s about citizens who want a sincere officer like him… and this city needs him,” says Lalitha Modreti, an SWM activist belonging to Bangalore Eco Team. Citizens are also planning to protest in different areas of Bengaluru and in central locations, questioning the transfer.
Click here to see the petition.

Why are citizens upset?

Subodh Yadav has been one of the young and energetic IAS officials the state has. In a recent court hearing on a public interest litigation on garbage, the judge reportedly praised the official for his ideas in setting the system right. Here are some issues he was working on:

Other than working on systemic changes, he was also interacting with many citizen groups on social media. Praveen S from Hoysala Nagar ward recalls that Subodh Yadav had got a pub penalised in Indiranagar area, and had rapped BBMP ward-level officials for inaction. 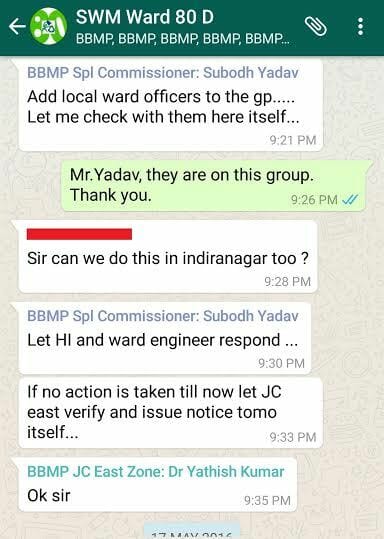 A conversation on a WhatsApp group for Ward 80, that shows the responsiveness of Subodh Yadav.

Why do people want Subodh Yadav back?

We put this question to a few activists. The reasons are in their own words:

Solid Waste Management needs good officers and continuity is critical. He was putting in place many key initiatives that yield both long term and short term results. SWM is a very important issue for city. Without continuity and good officer at the helm of the affairs, it will crumble. He was people-friendly and understood the pain points. He was in a way trying to get rid of the garbage mafia that has literally taken over Bengaluru.

Subodh Yadav is the first officer who worked at the ground level to understand the real operational issues that are hindering Bengaluru’s SWM policies. Through his Training for Master Trainer program, he empowered citizens to ask the right questions at every level of SWM operations. This was despite the pressures he faced from vested interests within the system.

Let’s use this opportunity to ask the government to appoint people with a good track record to all the important posts in the city. Subodh should just be a trigger… We want many more Subodhs to address the civic mess the city is in. One Subodh will not do. We want many more. Importantly, we want the government to appoint the right people and ensure that they last for at least three years.

Subodh Yadav is a transparent, action-oriented official dealing with the issues of garbage and Solid Waste Management (SWM) in city. I have worked with him. He has understood the issue so well…his vision shows clear solution to garbage mess. He has supported KCDC issues and residents of the area to make it a world class eco-friendly composting plant. We started seeing the results too. We need Subodh back in even higher position, to save Bengaluru.

Subodh Yadav is a straightforward official who believes in complete transparency and well-defined processes to tackle the garbage issues of Bengaluru. To this effect, he has revamped the garbage contract terms including things like GPS, segregation-based incentives and citizen feedback. He understands the enormity of the SWM issue and the need for engaging with citizens and residents to tackle it. He has stressed on penalising non conforming parties, which has dramatically increased the segregation percentage and plastic ban compliance. He has shown himself to be a taskmaster and gets the entire BBMP team to show results. He is highly responsive and addresses every citizen’s concern. We need a sincere official like him to crack the whip on garbage mafia and make Bengaluru a clean city.

A couple of months ago, I had WhatsApped him a picture of a huge pile of unsegregated garbage lying outside a pub in Indiranagar. Within 15 minutes he replied saying he will look into it. I did not take it seriously, but three days later I realised he had the pub raided by the Health Inspector and penalised them for the offences.

Ward 80 and Ward 89 in Indiranagar have WhatsApp groups for Solid Waste Management and Engineering… We have Subodh Yadav in both the groups. Every time a complaint is raised by a resident, he has 9 out of 10 times bothered to reply to them or instructed the ward officials to take appropriate action. He visited us in May this year and had spent a good two hours in a meeting with various residents welfare associations in Indiranagar across Ward 80. He addressed all our queries patiently.

He is one man who is very serious about solving the garbage crisis in Bangalore. We are very disappointed that he has been transferred. We will miss him.

By planning the master trainer programme that is being conducted in batches, Subodh Yadav took the first step to bringing accountability by helping people spread awareness. Here’s a clip of his talk at the first Master Trainer programme held at IPP Centre, Malleshwaram.

In this programme, enthusiastic citizens are educated on the existing system and how to work with it, how to ask right questions to get the right things done, to get Bengaluru out of its garbage misery. Here are two presentations by Subodh Yadav on the same.

NBF to periodically track the performance of seven elected corporators

Prior to the BBMP elections, 85 candidates had taken the Ideal Corporator pledge. And now, NBF will be regularly tracking the performance of the seven candidates who have been elected to the city council.