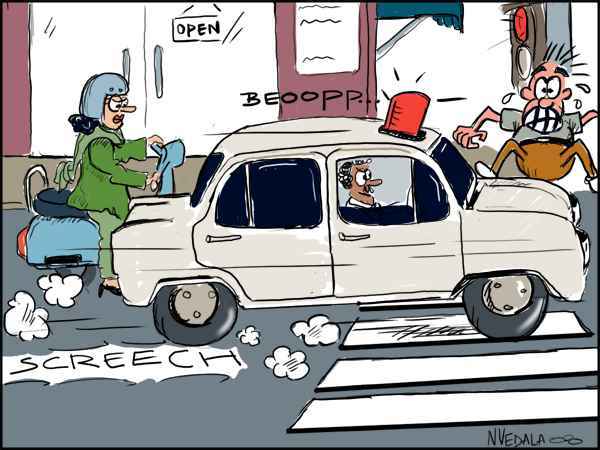 On April 10th the Jayanagar police station in association with  Bengaluru  traffic police held an awareness programme called Pehle Aap (after you), to emphasise the need for vehicle drivers to heed the safety of others on the road, especially pedestrians, especially elderly pedestrians. Ironically, less than 24 hours later, I had occasion to visit the Jayanagar police station to file a complaint.

I and another elderly pedestrian (male), were waiting  to cross the road at the busy intersection facing the shopping complex at 4th block, at 11 am  on Saturday April 11th.The signal turned  red for traffic flowing  north along 9th main, and the two of us stepped on to the zebra crossing to head towards Janata Bazaar. A two wheeler rider came on to the zebra crossing, hindering our getting across. The elderly man told the rider, “This is a pedestrian crossing, go back.” The fellow riding the scooter got aggressive, and refused to budge. I began to note down his vehicle number (KA05 JP161), at which he grew angry, taunted us, dared us to take down the  number,  and despite the red signal, drove off fast, endangering traffic flowing from  other directions.

I was tired, and in a hurry to get back to north Bengaluru. Going to the police station meant a detour, but I decided that I had a duty to file a complaint before this rash and callous rider knocked someone down (or killed a pedestrian). So off I went, and gave a written complaint with details of vehicle number, time etc. I was asked to meet sub inspector Srinivas who gave me a patient and courteous hearing, and promised to do the needful. He called me within a few hours to say that the vehicle number I had given, had ‘not come yet’ (innu bandilla), whatever that meant.

End of matter? One more violator of the law going scot free, in a metropolitan milieu that is getting increasingly chaotic and lawless? The traffic police cannot be present everywhere. We as road users and drivers, have to do our bit too, by observing rules ) and also by reporting violations to the police when someone breaks the law with impunity. There are frequent complaints in the media about pedestrians becoming an endangered species, but it is not just the rash drivers or the police – it is also the BBMP that turns a blind eye towards the atrocious state of our pavements, the encroachments, the piles of rubble, potholes, the lot. The traffic police cannot by themselves function in isolation, and people like Srinivas who try to help (unlike other police personnel—one asked me, “Has there been an accident?” implying that if there hadn’t been one, I had no grounds for complaint!) cannot provide succour if other departments do not work with the same enthusiasm (in this case, the one from whom he needed to get details of this particular two wheeler’s registration number).

This exemplifies the pervasive rot in all our service providers—a few conscientious officials, caught in a jungle of unaccountable, lackadaisical, even corrupt staff. No less a distinguished Bengalurean than Justice Santosh Hegde has said that corruption is so pervasive, it has become the norm rather than an aberration. One inspector Srinivas who wants to help, cannot ensure citizens’ safety or provide redress, without cooperation from other input providers—and that includes vehicle owners and pedestrians.

I remember how I once complained at this same police station about a two wheeler rider (a college student) who ran his  front wheel into my calf muscles, and declared “Enu aagilla” (nothing serious has happened) and rode away. I had a large bruise behind my knee.  Did I have to lift up my sari to show him that ‘something had happened’? I took his number and complained to the police station. A day later a woman called me up to say she was the mother of the boy, and that I should withdraw my complaint. “Don’t you have a son?” she argued, illogically. I do, but if he ran his vehicle over a pedestrian, I would want him to be penalised as a law breaker. Where did she get my telephone number? I asked. “The police station gave it to me,” she said. It is an offence to give out details of a complainant, but in order to register a protest against this lapse on the part of the police, I was told I had to go to the ACP’s office at South End.

What kind of system are we caught in, if a complainant with a grievance is penalised, and made to run around, rather punishment for the law breaker?

These two rash drivers could end up maiming or killing someone next time. Do we wait till a life is lost, before we wake up? This is a question each one of us has to ask, as road users, drivers, pedestrians and citizens; for tomorrow it could be you, or your loved one at the receiving end, under the wheel of a criminally heedless driver. The police can have a Pehle Aap sensitisation programme, but how does one din this basic message of responsible citizenship, into vehicle drivers who think they own the road and can get away with dangerous behavior?  The fact is, they do indeed get away with criminal behavior on the roads, sometimes through bribing, sometimes by pulling strings and clout through a VIP, and sometimes because one department does not cooperate with another to make citizens’ safety paramount. Now I understand why sometimes the onlookers take the law into their own hands and thrash a culprit. Just as there is a road rage, there is also an onlookers’ rage. Because punishment does not always follow automatically, for those who deserve it.

Those who drive through red lights are not just culprits, they are potential killers. A threat to all of us.

Despite a state board to provide for their welfare, construction workers get nothing from the bounty others reap from the real estate boom of recent times.

How should BMTC buses be run now, given social distancing challenges?

Once the lockdown lifts, how do we facilitate Bengalureans’ travel across the city?