While everybody else in the city were busy celebrating Ganesh Chaturthi last weekend, 73-year-old Sakuntala Narasimhan, who writes the column Civic Reflections for Citizen Matters, had a different task to do. She spent her weekend fighting the Bangalore Water Supply and Sewerage Board (BWSSB) contractor and officials, urging them  to restore the sewage connection to her flat.

Her connection was suddenly cut off without any prior notice from the BWSSB, who are on a drive to replace old sewage lines across the city. Sakuntala, a resident of Jayanagar 3rd Block, 27th cross, is unable to use the toilet in her residence. She is now forced to stay in another place, until the problem is solved. 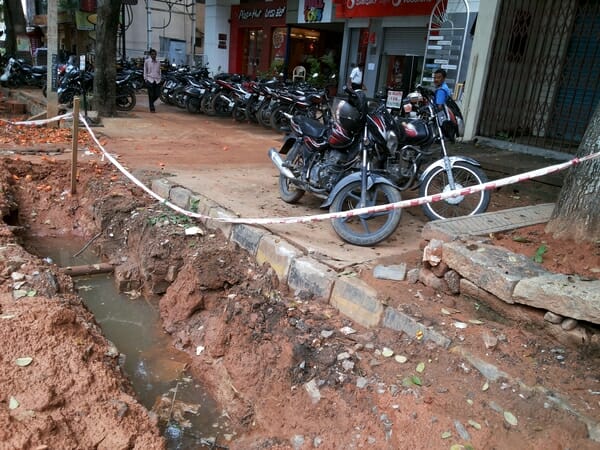 Sewage seeping from the unconnected pipe from Sakuntala’s house, left open by the contractor.

‘Pay if you want the sewage connection back’

She narrates the whole episode:”On September 8, 2013, when the water and sewage connection to my house was cut off, I approached the contractor. The contractor who identified himself as Murali, had got the whole road dug up. The whole stretch is now badly stinking and rain water is seeping into it. He said that if I want the sewage connection restored, I would have to pay him Rs 3,500. But for this, he will not give me any receipt.”

“I was not willing to pay him. So I decided to call my own plumber and get the connection restored. My plumber inspected the sight and told me that the whole job will cost not more than Rs 1,000. As soon as he was ready to start the work, Murali stopped him and threatened him. Murali warned the plumber not to do the work and insisted that he only will do the job. Murali also told the plumber to convince me to to pay the ‘small’ amount of Rs 3,500 and get over with it,” she adds.

Sakuntala then approached the BWSSB office to register her complaint, on September 9, 2013. She met BWSSB inspector, Mushtaq Ahmed who told her that it was a petty issue and suggested that she could bargain with Murali, settle the deal at Rs 2,000 and fix her problem. “I have also sent an email to the BWSSB Commissioner and PRO, to chairman@bwssb.org and pro@bwssb.org on September 11, 2013.” She now awaits their reply and some action on ground.

She adds that she is not the only one who is suffering this menace. The residents of the whole area are forced to pay the contractor. The Pizza Hut nearby, Sakuntala says, had to shell out Rs 5,000 to get the lines reconnected.

After approaching the higher ups in BWSSB, Sakuntala now says that Murali has threatened her. She says he has given her an ultimatum: “If you don’t let me do the job, I will close the road and go away. Then, later, you will have to run around to get permissions to dig the road and restore your connection.”

‘Getting the reconnection is resident’s job’

Mushtaq Ahmed says that BWSSB does not have to communicate about relaying work in any specific area, as it is commonly known that all old lines are being replaced in a phased manner, across the city.

“In the meantime, the contractor is also telling people whether their old pipelines are rusted or dirty, and if they need to be replaced. People have to replace their old lines and connect them with the new ones. Instead of asking for another plumber, people can use the facility of the contractor and get their work done by paying an additional amount,” he adds.

He was also quick to add: “BWSSB is not involved with any contractor. However there is a prescribed six-inch pipe which has to be laid to ensure that water and sewage lines remain good for another 20-30 years. So it is better if the contractor and their plumbers do the job.”

Engineer Gopal Gowda says that he is new to the post and thus was unaware of the issue. He said he needed some time to take stock of the situation and fix the problem.

He, however, clarifies that BWSSB’s job is to lay the main water line and sewage lines and it is for residents to take the connection after obtaining required permissions. This is the rule. Residents can take the help of any independent contractor to do this job. They need not depend on the assigned contractor.

Complain to BWSSB if you are suffering

The Assistant Executive Engineer, BWSSB, Rajeev said there are around 600 houses and 80 commercial properties in Jayanagar 3rd block. But so far no one has made any complaints about contractors threatening them. “We will take action against the contractor or even blacklist him, if need be,” he added.

When Citizen Matters brought this to the notice of BWSSB Chairman Ravishankar, he expressed shock and worry over the issue, saying: “This is huge! Residents can employ independent licensed contractors to connect their sewage lines with the main lines. I request Sakuntala and all other worried citizens to formally complain to me directly so that I can look into the issue and take action against the contractors, engineers and other staff members. They should not be scared of anything or anybody.”

People can complain to the BWSSB Chairman, by sending their emails to chairman@bwssb.org or call at 22941500, when faced with such problems.

Health inspector to act only after people fall sick

Commenting on the health and safety of the residents and eateries in the vicinity, south zone BBMP health officer M N Lokesh says: “Water contamination and maintaining sewage lines is the responsibility of the BWSSB. They should ensure that the water is potable and safe.”

“However as a BBMP health officer, I can say that people should take care of their health and check if the water they are consuming is potable or not. If people fall ill, only then BBMP will check what are the causes. Until then there is no need to worry,” he says.

Help! Someone else’s sewage in our pipes
Bangalore is drowning in its own sewage
Restaurants clogging up sewage pipes?
Sewage from apartments flowing into Iblur lake kills fish

After months of delay Namma Metro is finally being launched today. All five stations will be inaugurated this morning and the metro will be open for public from 4pm.

Illegal dumping at Somasundarapalya lake: Will the authorities intervene?

For the past 2 years, the Somasundarapalya Lake Rehabilitation Trust has been trying to save the lake. Recent dumping of mud into the lake brings about renewed protests.