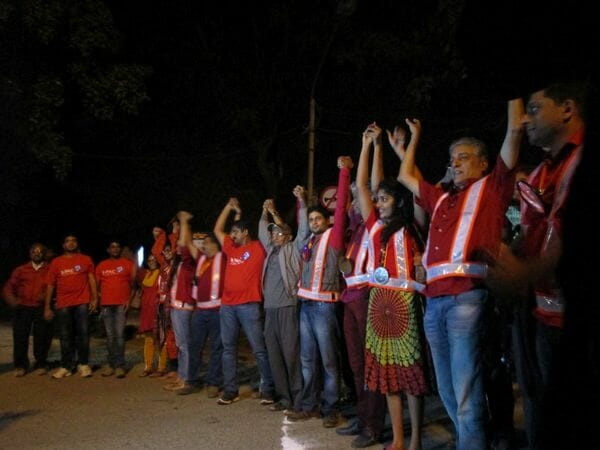 Volunteers, attendees and others join hands along the line representing the old border of the fort. Pic: Holly Thorpe

As the clock struck 11 and the city was all set for sleep on Friday July 24th, a group of around 200 men and women gathered in front of the Tipu Sultan Fort gate at the otherwise busy KR Market road in Bengaluru. Clad in red, they braved the night and assembled at the centre of the market area to retrace some of Bengaluru’s lost history. This was the scene at the Heritage Party, organised with the tagline, “Let’s Paint the Kote Red”.

Two directors in the bangaloreREsidency program at the Goethe-Institut/Max Mueller Bhavan organised the event, in association with MOD-Institute and Suchitra Film Society, and supported by B.PAC. The two German film makers—Miriam Jakobs and Gerhard Schick, both part of bangaloreREsidency—were astonished to hear about the lesser-known Tipu Sultan Fort in Bengaluru. The then fortified town was stretched across a vast area, unlike what it is now, where only partial remains of the fort are found in KR Market.

In an attempt to imagine the original boundary of the fort and recreate it, the filmmaker duo decided to host a heritage party.

What was the party all about?

The heritage party was not literally a party, and the participants did not literally paint the fort red. They instead laid a white boundary around the fort with rangoli powder and walked along the path for about 2 km, at midnight. 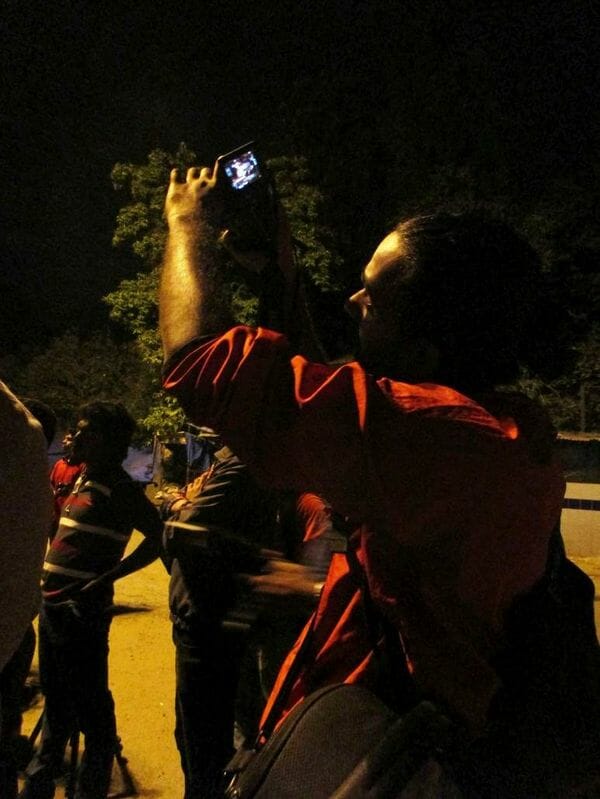 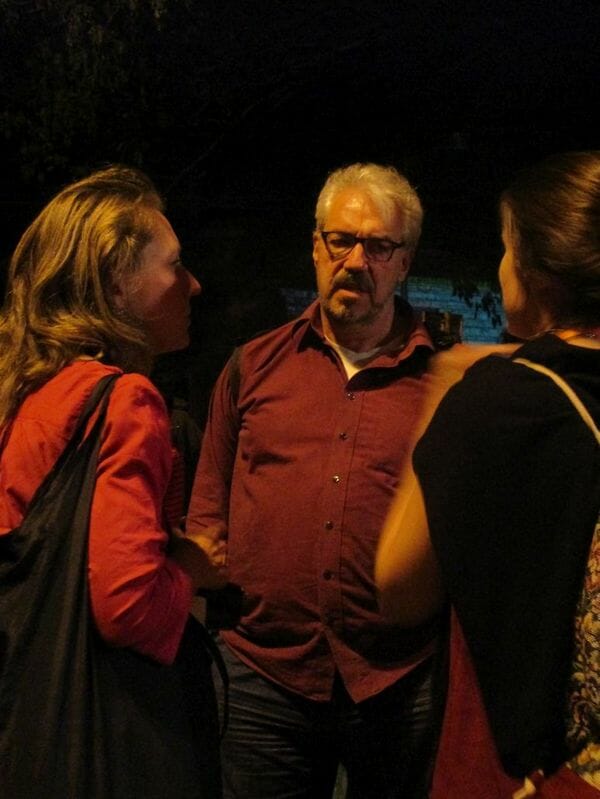 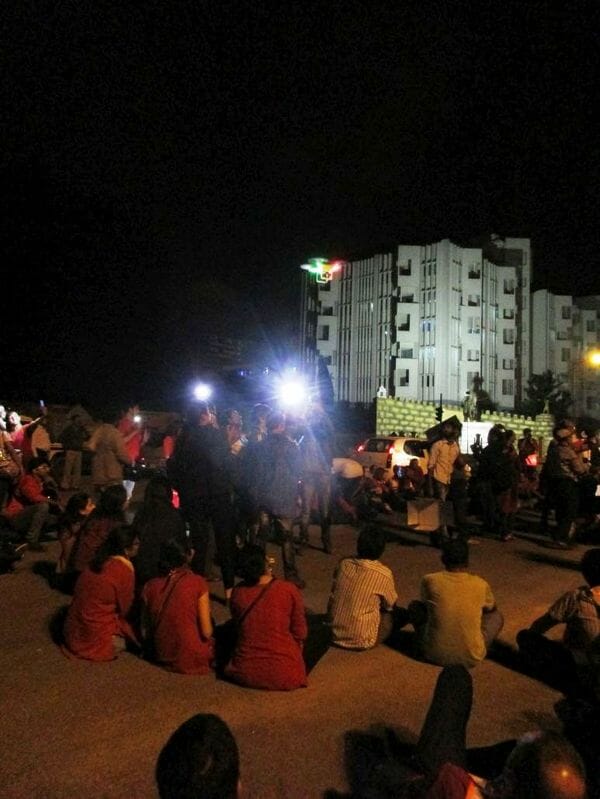 The crowd sits at an intersection at K R Market as the drone hovers above them, recording. Pic: Holly Thorpe 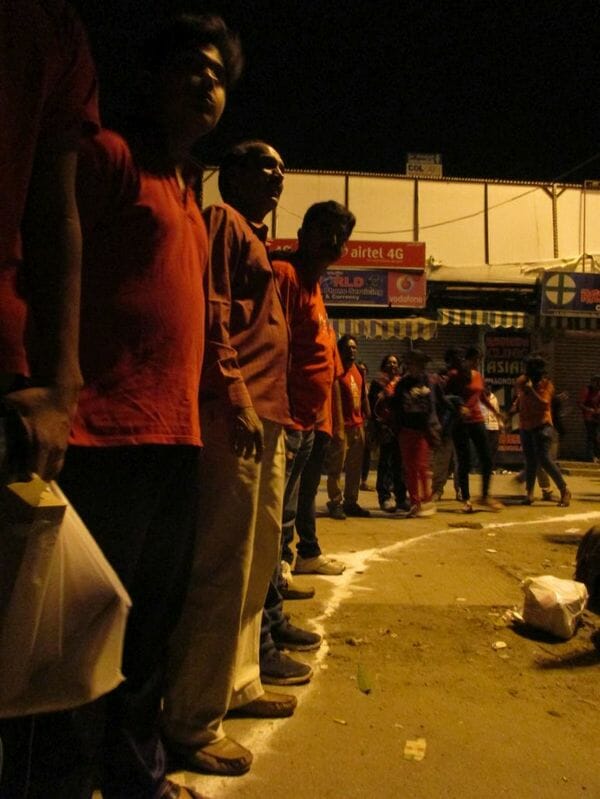 Attendees form a human chain along a white line representing the old border of the fort. Pic: Holly Thorpe 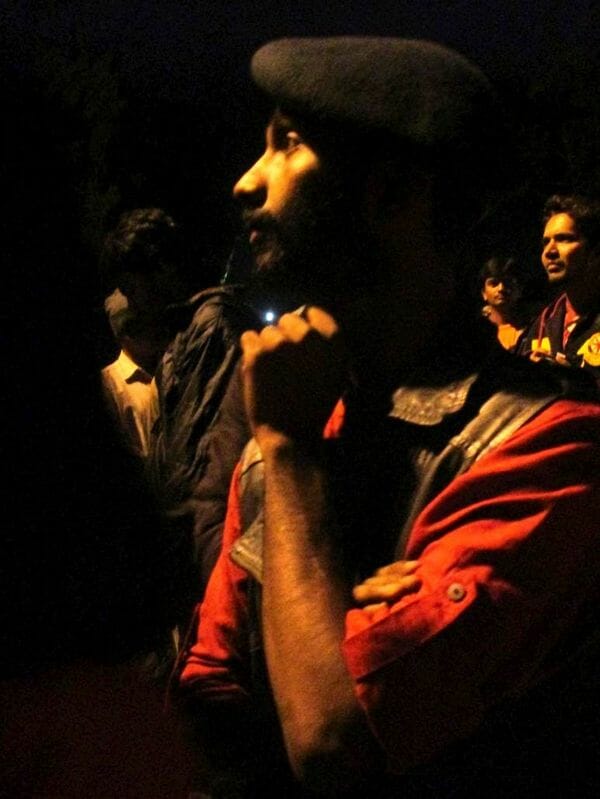 An attendee listens as the organiser explains the route of the 2 km walk. Pic: Holly Thorpe

Participants, under the guidance of volunteers, walked past Tipu Palace, Kote Venkataramana Temple, Tipu’s armoury and the Fort School. At 1 am, they gathered in the middle of the KR Market road, where candles were lit and slogans raised in memory of the fort. Well-known singer M D Pallavi energised the crowd with a few songs, while an aero drone captured the video of the event.

For Miriam and Gerhard who have done several documentaries on urban space and urban art, an opportunity to work on Bengaluru came through bangaloreREsidency. “Bengaluru which portrays the image of a cosmopolitan metropolis, has so much hidden history, art and architecture in it. While we were pondering over working on a documentary on urban space in Bengaluru, our friend Naresh Narasimhan told us about Tipu’s Fort. When we learnt about the significant role of the fort in the history of Bengaluru, and how the real boundary of the fort has been erased due to urbanisation, we decided to work on the same,” Miriam told Citizen Matters.

Miriam and Gerhard, along with 10 film students from Bengaluru, have videographed the entire three hours of the event which will be part of the documentary. “Bengaluru has a great past which we have not seen, which has become invisible. We want to make a documentary on this fort and show it to the world,” she said. The students have participated in a two-week workshop with the directors, compiling work for the larger documentary.

On asked why was the event called ‘Paint the fort red’ while in reality it was not painted, she said the word was used a metaphor. “It is just like the phrase – paint the town red. We are symbolically using the metaphor to drag the attention of people,” she said.

One of the organisers of the event, filmmaker Prakash Belawadi said that since nobody knows the exact boundary of the fort, they have marked the boundary, which might be close to the original boundary. The event brought several youngsters together. They are planning to organise similar programmes in the future at Somanath temple, Sarjapur and other historical areas, and ask the government to introduce a heritage policy.

Maureen Gonsalves, Cultural Coordinator at Goethe-Institut, said that she hopes the event will create a ripple effect: Once a small group of people learn the history and get excited about it, more and more will come forward. “Basically the story of the fort is almost lost, so we want to revive their awareness of what it is,” she said. Adding, “Not just awareness, but what it was.”

Gopinath C R, a retired general manager at HAL, at 84 years, was one of the oldest attendees who has distant memories of the old Fort area. He eagerly participated in the event.

“This is an area that is a favorite of mine. I was born here in this hospital and I played around here in this fort,” he said. Recalling a colourful, clean and quiet neighbourhood, he added: “It’s a pleasant surprise that somebody who is a stranger to Bangalore is interested in this fort. So many people who live in Bangalore and know the history, have not done anything about it.”

But perhaps that’s changing. Along the way, some attendees chanted in Kannada: “Bangalore’s fort, our fort!”

As Bengaluru’s vehicle count crossed 80 lakhs, it has now become the metro with the second highest number of vehicles in India, said the Karnataka Transport Commissioner. Read more on what else has happened in the city this week

Saga of a flat’s zero-waste drive

While some residents opposed the waste management drive at Mayflower Block in JP Nagar’s Brigade Millenium, others continue to segregate their garbage.

A film festival to showcase Gandhian concepts of nonviolence

Watch path-breaking films from around the world, that celebrate women’s immensely significant role in nonviolent conflict resolution. Catch a conversation “Speaking Peace in Times of War”. And more!