Sometimes, the departure of one of the circle of friends comes as a shock, and so it was when I got the news of the sudden passing of Ashok Hallur, just short of his fifty-first birthday.

Ashok, in his short life, had already made a name for himself as an active wildlife film-maker and avid conservationist. He was born in Bagalkot, Karnataka, on 25 February 1966. He received early schooling at his village, Hanamapura, with a short stint at Kavalur, later moving to Bijapur. One of his teachers noted his artistic ability and advised him to go to art school, and he applied to Chamarajendra Academy of Visual Arts (CAVA, you can see their website here) at Mysore. He was granted immediate admission because of his talent.

He moved to Bangalore in 1991, and in 2002, he married Padma, whom he had met in 1996 in the course of his career as a professional photographer. 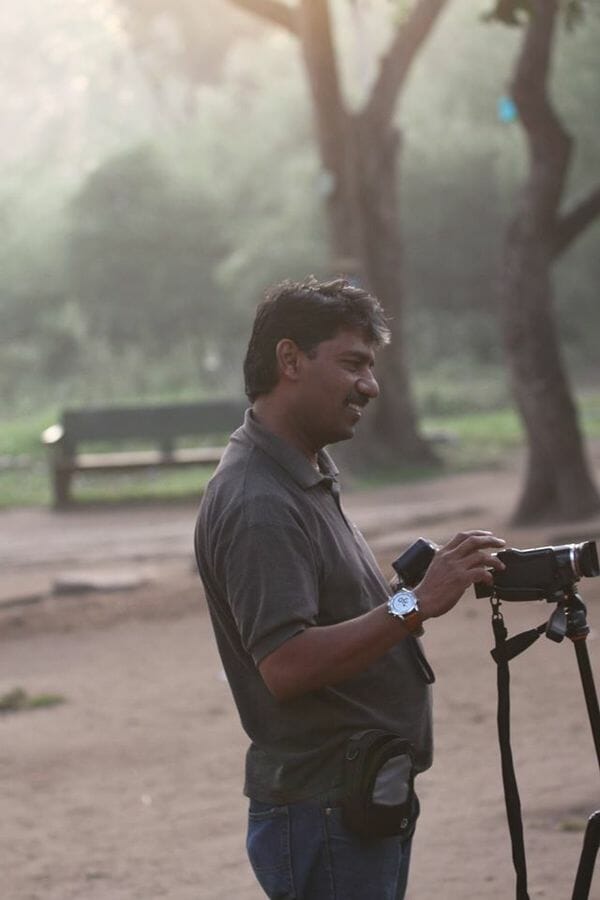 Here he is, through the eyes of Padma, who has been his partner not only in life but in the wildlife film-making efforts too.

Padma, how did Ashok get interested in wildlife,and videography?

Padma: Ashok has loved animals all his life; in fact, he wanted to marry me in a jungle! The start of the conservation journey can be traced to a day when he was watching TV in 2008, and saw that four leopards had died on a single day in Karnataka. The interest slowly increased and intensified, and in 2012 we decided to make a song on wildlife on the occasion of Earth Day 2012 (April 22). We did contact an amateur group and they wrote a song titled “Tears of the Wild”.

However, finally, the song took shape as “Please namnna kolbedi kolbedi ri”, based on the song “Why this kolaveri di?” which was all the rage at the time. The lyricist, the singer and the musicians were
all people we found on Facebook. We released it four days before Earth Day 2012, and it was a hit.

You can see the video of the song below:

What was the organisation that Ashok and you founded?

Padma: We registered “Save Tiger First” in April 2012.

What are Ashok’s qualifications as a videographer?

Padma: Ashok is a trained professional photographer. He holds a Bachelor in Fine Arts from Chamarajendra Academy of Visual Arts (CAVA), Mysore.

Where have you and Ashok travelled in the course of your film-making trips?

Padma: We’ve been doing at least one week of travel every month. We’ve travelled to Kudremukha, Bhadra, Bandipur, Nagarhole, Jawalagiri, Waynad, Hampi, Dandeli, Kaiga and other places, too.

How did the film, “Bannerghatta Breathing for Bangalore” come about?

Padma: We met Dr. Sunil Panwar when he was the DCF of Banerghatta National Park (BNP) and the synergy instantly happened. BNP is the backyard of Bangalore, with so many conflicts, and we decided to bring  out a film bringing out the importance of wildlife in  the urban context.

Could you share a memory from the making of this film?

Padma: The last shoot that we did was at the railway barrier in the southern end of BNP. From there we went to  the place where the tiger was first seen  publicly in BNP – the barber stone. It was indeed a
blissful  experience and the forest looked beautiful. Another memory I have is of visiting the Doddibetta (near Jaipur Doddi) and filming Basappa Walkie (who has  been working with the Karnataka Forest Department for over 22 years).

Tell us how the film debuted, and your plans to further its reach.

Padma: “Bannerghatta Breathing for Bangalore” was released by His Excellency the Governor of Karnataka, Vajubhai Rudabhai Vala, at the valedictory program of 62nd Wildlife Week at J N Tata Auditorium on 7th Oct 2016. Due to protocol, only 10 mins (short version) of the film was played.

The whole film is of 20 minutes duration, is it not?

Padma: The public screening of the 20 minute film will be done for the first time on 31st January 2017 during the Ashok Hallur Memorial Service at National Gallery of Modern Art.

We had plans to apply for an award for this film… I hope to pursue this further, in his memory.

I have been part of Ashok’s journey from the very first project (Earth Song 2012). I am one of the three Trustees of Save Tiger First. His passion just rubbed off on to me, and now remains with me
forever…

Note: As the full-length film will only debut at Ashok’s memorial function, readers can see the slides of the work here.

Here’s wishing Padma success in her journey on the path that Ashok blazed a trail on, in the quest for conserving wildlife.

Wildlife Documentary: Lion-tailed Macaques
Can you get a degree in wildlife in India?
Spotting wildlife in Bengaluru

While there was panic outside the Chinnaswamy stadium last week after explosives were found, emergency exits within the premises were locked until the match was over.

An entire ecology around street-based sex work has slowly disintegrated, pushing many of them into further invisibility and vulnerability