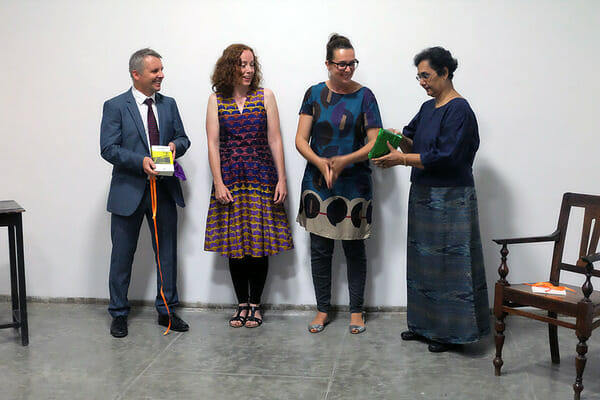 In early September 2015, MOD Institute, an urban action and research institute based in Berlin and Bengaluru, and the German Consulate General Bengaluru, released the book, Otto Koenigsberger: Architecture and Urban Visions in INDIA. The books traces German architect Otto Koenigsberger’s time in India, and how his planning and design concepts continue to be relevant for urban development in India even today.

Story has it that Koenigsberger came to Bengaluru in the late 1930s at the behest of his uncle, German physicist and mathematician, Max Born (recipient of the 1954 Nobel Prize in Physics), who was a guest of CV Raman at the time. The Diwan of Mysore, Mirza Ismail had enquired about an architect, following which Koenigsberger was introduced. In 1939, he went on to become the chief architect and planner to the state of Mysore.

In the following nine years, Koenigsberger was at the helm of the design and construction of several public buildings. Notable among these are the erstwhile Bangalore City Bus Terminus and the Municipal Swimming Pool, the Krishna Rao Pavilion, and some of the buildings at Indian Institute of Science, including the dining hall, the Aeronautical Engineering Department and the Metallurgy Department.

Post independence, Koenigsberger was appointed as the first Director of Housing under Nehru’s government. He held this post from 1948 to 1951 and was mostly involved in planning for the housing of those affected by the partition. He was also instrumental in the town planning for Jamshedpur, Gandhidham and Bhubaneshwar. He left Indian shores for London in the early 1950s.

Rachel Lee, one of the editors of the book on Koenigsberger, states how challenging it was to gather information about Koenigsberger and his work, since hardly anyone recognised his name or his work. We share an excerpt from Maximising the Local, an essay from the book. This is republished on Citizen Matters with permission.

The essay talks about Koenigsberger’s attempt to create sustainable buildings that adhered to local building traditions and cultural practices. Of the three examples cited in the excerpt, one still stands today – the Krishna Rao Pavilion.

The book, OK – Otto Koenigsberger: Architecture and Urban Visions in INDIA, is available for purchase here.

Before setting foot in Bangalore, Koenigsberger had already begun considering the implications of the tropical climate on architecture, and analysing the solutions he encountered on his journey from Europe to India. Writing to his mother from a hotel room in Colombo, Ceylon, in April 1939, he pondered the advantages of the ceiling fan:

I have a large room, from the ceiling of which hangs a large fan with four 70cm long blades. The rooms are very high to allow the hot air to rise. The fan then pumps the hot air back down onto the unlucky resident below. This sounds very impractical, which it is, but without a fan it would be absolutely impossible to sleep in this humid heat.

Koenigsberger continued his contemplations in Bangalore, and articulated his approach to building in Mysore State in a series of lectures in 1940 and 1941. Addressing an audience at the Mysore Engineers’ Association, he defined the really modern architect as follows:

The really modern architect is only he who takes the trouble—and it involves a lot of work and trouble—to apply to his profession the principles of scientific research.[1]

Although he was clearly inspired by the concepts of European modernism, Koenigsberger had no intention of transferring internationally styled white cubes to India, or decking the Deccan plateau with Domino-Houses. Instead, Koenigsberger envisioned modern architecture in Bangalore to be climate-optimised and homegrown, founded on an understanding of the needs and habits of the local population and built of indigenous materials. By integrating the results of scientific research­ – in the climatic and social conditions of Mysore State as well as the locally available building materials – into architectural design, he believed buildings would become more efficient while embodying and expressing the local culture.

Rather than adorning buildings with expensive ornamentation, Koenigsberger saw great potential in inherently expressive local architectural features like the chajja. While simultaneously performing several functions (controlling the penetration of sunlight, reflecting glare, protecting from rain, limiting the need for glazing and windows, and providing shade), these protruding horizontal slabs with their long lines, sharp angles and transparent shadows could contribute to defining a building’s external form. Thus for Koenigsberger, combined with a scientific approach, a key aspect of developing modern architecture in India lay in the experimentation with and conscious use of existing vernacular forms such as the chajja or jalli.

Simply put, he wanted to maximise and modernise the local. The selection of buildings presented in the following pages illustrate his attempts to create sustainable, low-cost, climatically responsive buildings rooted in local building traditions and engaged with the local cultural practices. 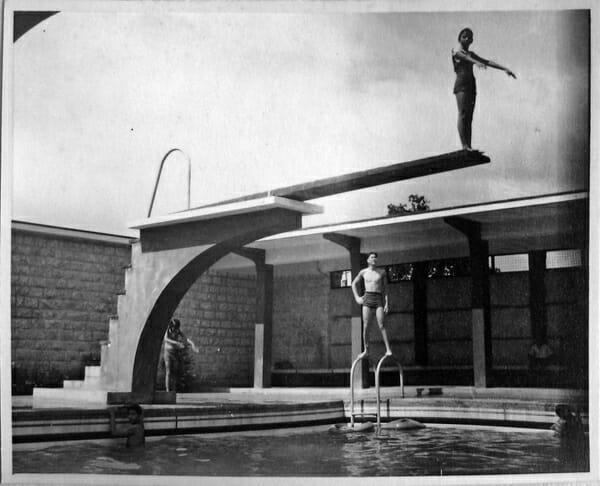 The Municipal Swimming Pool, the first of Koenigsberger’s buildings to be completed, opened in December 1940. Colonnaded sitting areas flank the rectangular pool, and a single-storey building, presumably housing the entrance area and changing rooms, faces the colourful, geometric diving boards. Combining light grey granite and red painted concrete with white walls and black cornices, Koenigsberger created a simple, playful design. According to this excerpt from a letter to his mother, he was pleased with the result:

[The] Swimming Pool […] was opened in great ceremony by the Honorable Lieutenant Colonel de la Hay Gordon, Brit. Resident in Mysore. The Swimming Pool with its buildings looks nice except for an ugly granite tombstone (polished of course) which commemorates among many other names also the Architect in golden letters and with wrong spelling.[2]

It is interesting that the British Resident took part in the opening ceremonies of a building in Bangalore City, and perhaps indicative of the cooperation and communication between the British and Indian parts of the city. The polished granite ‘tombstone’ turned out to be an anomaly – Koenigsberger’s name appears on the very few of the foundation stones of the buildings he designed. However, whether that was due to his personal wishes or a shift in policy is unclear.

The swimming pool has been demolished. The site now forms part of the garden of the BBMP, the Greater Bangalore Municipal Corporation. 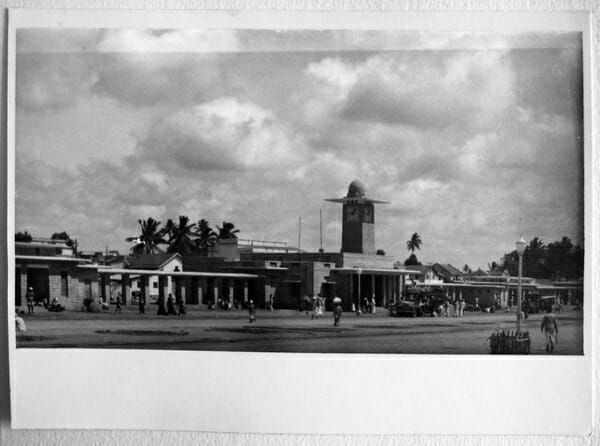 Hot on the heels of the swimming pool was Bangalore City Bus Terminus, which also opened in December 1940. The bus terminus was an imported building typology, for which there were no local precedents. Koenigsberger described it as, “something like a railway station for busses [sic]. This is nothing extraordinary for the USA, but in India it is the first of its kind.”[3] Koenigsberger’s design features a central restaurant connected to two waiting areas by colonnaded walkways. Thin, white-painted chajjas, at different heights and of varying lengths, contrast with the rough-hewn grey granite walls and emphasise the horizontality of the composition. Despite its modern function, the architecture of the bus station features a prominent clock tower, topped with a dome, which seems out of proportion with the rest of the composition and has none of the grace of the colonnades or slender chajjas. In his portfolio Koenigsberger writes emphatically, if somewhat obliquely, “Government insisted on clock-tower with dome (!!!),” which Koenigsberger’s friend, the physicist Homi Bhabha, clarifies in a handwritten note in the margin, “Mirza Ismail !!” This was the first of several buildings that manifest the conflicting approaches that Koenigsberger and Mirza Ismail had to building.

The bus terminus has been demolished. 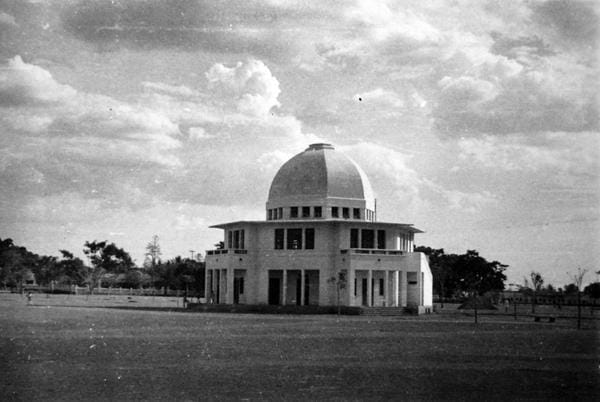 The Krishna Rao Pavilion, which was completed in 1941, marks the centre of Krishna Rao Park in the heart of Basavangudi, an extension to Bangalore City that was laid out in the early 20th century along British town planning lines. Both the park and the pavilion were financed by donations from M.N. Krishna Rao (1877-1958), Mysore State’s finance minister, first member of the council, and acting Dewan following Mirza Ismail’s resignation in 1941. Based on an octagonal plan, the two-storey masonry building is surmounted by a single large segmented dome, which, together with the axial symmetry, porticos and external staircases, combines to give the squat pavilion a rather awkward, overwrought appearance. As Koenigsberger excluded this project from his portfolio, it is likely that he was not particularly happy with the outcome, which quite probably was very influenced by Mirza Ismail and M. N. Krishna Rao.

The Krishna Rao Pavilion is relatively unchanged and still in use today.

Udaya Kumar P L, an accidental historian who unearths and preserves inscriptions, has won the 2019 Namma Bengaluru Award for ‘Citizen Individual of the Year’. Ashok Kamath, who runs Akshara Foundation, is ‘Namma Bengalurean of the Year’

We at Bangalore need not fear the entry of McDonald’s or Kentucky Fried Chickens because we have our own smart businessmen who have innovative ways of serving loyal customers.