On 1 August 2013, within a month of state budget being presented, tenders have been called for five signal-free corridors. It has stirred a hornet’s nest again with speculations about land acquisition and traffic problems while the work is on. The last date for submission of tenders is 4 September 2013.

These five corridors cover approximately 55 km inside the city. They are:

These corridors need a total of 16 grade separators. Grade separator refers to a flyover or underpass at junctions that have heavy traffic. The tender advertisement also mentions “improvement of the roads” in the work required to be carried out.

The land to be acquired is already identified and Transfer of Development Rights (TDR) system will be used for compensation. Land upto a maximum of 18 feet on both sides may need to be acquired. The respective zonal offices of BBMP will identify the property and accordingly notices will be issued. (To know more about TDR, click here.)

In 2009, Yeddyurappa government chalked out a plan for 12 signal free corridors. The 12 proposed corridors, covering 122 Km, have been on hold since 2009. Back then, the entire project was to cost Rs 22,000 Crore with financial assistance from HUDCO, BDA, state and central government.

This project was to be floated under Private Public Partnership (PPP) basis. But in 2009, one of the contractors filed a court case against BBMP for flouting rules in a tender worth Rs. 3,248 Crore.

“The aspirant alleged that BBMP did not give a fair chance to all the contractors across the globe… BBMP withdrew the tender before the closing date,” recalls K T Nagraja, Superintendent of Roads, BBMP.

However, later in 2010, the court passed a clean chit to BBMP, clearing the decks for the project.

By this time, the project cost had escalated by 47% above the original estimate. BBMP had a financial crunch and the project was put back on the shelf.

Only two projects were completed by then, by BDA, from Town Hall to Kengeri via Sirsi Circle (15.5 km – Nayandahalli underpass) and Cubbon Road to Outer Ring Road via Kamaraj Road (8 km).

The then commissioner, Siddaiah refused to take any more loans and said the corridors have been planned without any scientific research. He also showed apprehensions on acquisition of 43 lakh sq ft of land that would cost BBMP Rs 6,000 Crore.

Down from 12 to five

In 2012, government took a realistic approach and curbed down the number of corridors to five, however, “Later it was decided to leave it for the next government,” says R K Misra, who is part of Technical Advisory Committee of BBMP.

Previous budgets also spoke about signal free corridors, but it was got off the ground. The new government has dusted the files again and allocated Rs 618 crore for the total project.

The projects will be funded by Government of Karnataka. If required, BBMP will also invest in the project, if the costs exceed estimation.

Tenders had been called for these five corridors last year too. They have been re-tendered this year, with a strict deadline of two years.

How are the corridors made signal-free?

A two-lane road will have grade separator of standard width, that is 7.5 metres per lane. In case of corridors that run unidirectional, (traffic running one way only) two lanes will be constructed, while for bi-directional (traffic running up and down) corridors, four lanes would be constructed. Therefore bi-directional underpasses will have width approximately 15 metres (7.5 metre + 7.5 metre)

A median that divides the two lanes will be around 1.2 meters (or lesser). In case of underpass, a service road or a slip road of 5.5 meters will be provided.

For pedestrians footpaths, not less than two metres will be provided, depending on the availability of the land. Overall, each grade separator will require approximately 30 metres in length to create a signal-free corridor. The proposed five corridors will connect some important heavy-traffic junctions to peripheral areas of the city.

Approximate representation of signal free corridor of Mysore road to Silk Board.

The most expensive corridor to be built in the whole set is the ORR-Mysore Road Junction to Central Silk Board Junction stretch. The cost estimated in the tender is Rs 108.7 crores.

The corridor running between Vellara Junction to Hope Farm will acquire 154 properties, fully or partially. This corridor has a projected a total of Rs.88.9 crores.

The corridor will run along the Old Airport Road, Kundalahalli and Whitefield. Wind Tunnel Road Junction, Suranjan Das Road junction and Kundalahalli Gate junction will see construction of bi-directional underpasses. The road running between ASC Centre junction to Hope Farm will be improved.

For this corridor, Indiranagar 100 ft road junction and NH 648 will be improved. Cost estimated for tender is Rs 99.5 crore. This plan will acquire 94 properties, fully or partially. 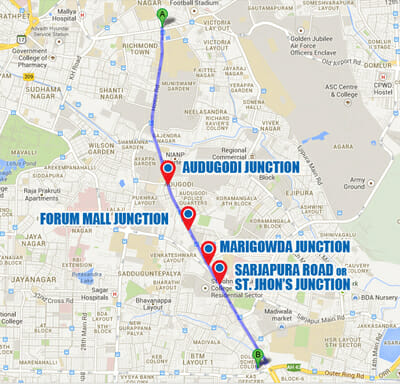 Silk Board to Vellara route has four grade separators.

Silk Board Junction to Vellara Junction

Tender for the corridor Central Silk Board junction to Vellara junction has bidirectional underpasses at Adugodi junction, Forum mall junction and Marigowda and Sarjapur junctions. 800 meters from Forum Mall underpass will be integrated with Sarjapur junction. Cost of the project is Rs. 72.3 crore. Around 81 properties will be acquired along the stretch, fully or partially.

Therefore once a vehicle enters Forum Mall junction, it will directly get connected to Sarjapur Road junction and then to Silk Board.

The service roads or slip roads will give flexible option for people travelling to Madiwala, National Games Village and Sarjapur.

Improvement involves civil work required to build the corridor, construction of footpaths, asphalting, gardening, widening narrow lanes as per the standard width of the lanes etc.

The road running from the Soap Factory to Rajajinagar Entrance along the Dr. Rajkumar road will be improved and altogether it will cost  Rs 24.3 crores.

The currently proposed five corridors will acquire 485 private and government properties. BBMP Commissioner says: “We have requested people, whose property will be acquired, to apply for Transfer of development Rights (TDR). Failure of the same will lead to legal acquisition of land. ”

It is mandatory according to the law to consult public for any public construction. But Somashekar is not aware whether any such consultation was done for these projects. He took charge two years ago. He says, “While forming the DPR, they must have consulted the public.” DPR was formulated by Manasa Consultants.

Local contractors win the bid through interference of politicians but later such contractors delay the job. Like the CNR junction, near IISc is yet to be completed.

“To avoid local contractors criterias for contractors remains rigid. A certain turnover of the company is required along with past experience of such corridors,” say sources in the Tender Department of BBMP.

R K Misra, Technical Advisory Committee of BBMP, says: “The old government’s image was tainted because of corruption. No good company like L&T was interested to invest in the project and a very bad response was seen for the tenders in 2012.”

Therefore the government decided the corridors to be shelved for the new government, that might be able to pull in good contractors.

Does BBMP have funds?

Though BBMP’s opening balance in the last budget is as low as Rs.75 crore, BBMP Commissioner Laxmi Narayan was sure BBMP will fund the project if required. He said: “We do not rely on static money. BBMP has continuous flow of funds collected through revenue taxes.”

Why these five corridors?

“These corridors are well-planned. On the basis of the traffic study report as submitted by DULT this project has been approved by the state government,” says BBMP Commissioner, Laxmi Narayan.

He adds: “These projects are of great importance as Bangalore’s traffic density has increased day by day leading to choking of the lanes. These corridors will ease the choke and help people to commute easily from interior to the far flung areas. ”

Bengaluru: No place for transgenders?

Transgenders are an exploited lot in the city of Bengaluru. There are many laws that can be effectively used to corner them. Last heard, cops in Bengaluru used the law that prevents beggary, to round them up.

How mishandling of garbage contributes to Bengaluru’s air quality crisis

The mismanagement of solid waste continues in Bengaluru with incessant garbage burning. There are PILs filed in the High Court, but will they help reducing burning of garbage?