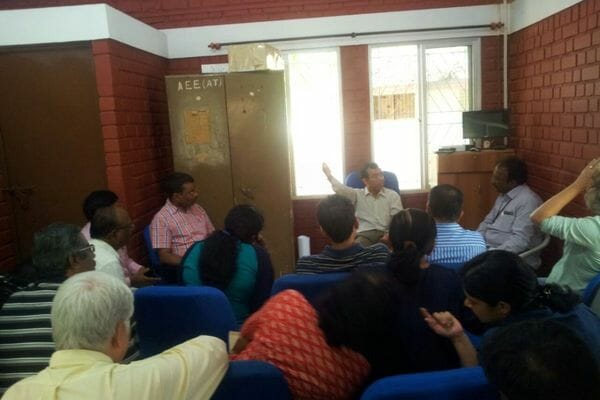 To the Chief Minister of Karnataka, Sri Siddaramaiah,

This is a tipping point.

We citizens of Bengaluru who have been working on bringing in Sustainable Solid Waste management since 2009, find the abrupt transfer of BBMP SWM Special Commissioner Subodh Yadav, IAS, completely untimely, unjustified and unacceptable.

This move of the Government is the tipping point which is leading into the streets well-meaning citizens who have been working with passion and optimism in their neighborhoods for improving the solid waste management in and around them.

What was Subodh Yadav trying to do, as Special Commissioner – Solid Waste Management?
Read: People rally behind transferred IAS official

We as a city have put up with dumping, destroying village lands, indiscriminate pollution of water bodies, unpardonable burning of garbage and worsening health conditions with widespread dengue and chikungunya, even affecting the animal life with cows dying because of excessive plastic in their stomachs, degrading inhuman condition of waste workers with no salaries, no health and safety in their working conditions for close to a decade now.

After years of working, countless man hours of our many volunteers with an unresponsive Government and Municipality, we were able to create a shift and movement forward because of the intervention of the High Court of Karnataka. Finally, we have now seen some momentum with progressive directions from the Court, growing citizen acceptance and participation and with a set of officers at the helm who have shown a commitment to seeking solutions and a capability of understanding and setting in place new processes. This move of the Government to transfer the SWM Special Commissioner Subodh Yadav exposes the lack of commitment and a complete hypocrisy and lip service of creating a clean and healthy Bangalore City .

This move by the Government is seen as discrediting the widespread citizen support, involvement by removing the governing officer who was seeking to integrate citizen participation at the ward implementation level.

Good officers are hard to come by, don’t pass the baton

As a citizen group, we have worked with close to 10 BBMP commissioners, countless ward officials and many Zonal officers. It has been our unfortunate experience that aside from a couple of good officers, the others have been unresponsive and uninterested in the subject of SWM and mostly unable to show sufficient competency to deal with the complexities of Municipal Solid waste management.

And now when we have in the present BBMP SWM Special Commissioner an officer, who the Government saw fit to post to this special post to deal with the Solid Waste Management, and who was giving the Government credibility for having put the right person in the right place through his quick planned action, quick results, secondary management, project management, clarifying and identifying processes, bringing in transparency and penetration of information, catalyzing self-organization in communities—all in his short tenure of eight months, it seems like the Government has shot itself in the foot by abruptly transferring a well-performing officer.

This only leads to conjecturing that may be the Government does not intend to provide good performance, why else would good officers like Commissioner Siddaiah who exposed the garbage scams and the former Commissioner Rajneesh Goel who created the first dent in the garbage contract system, albeit with the backup of the High Court directions, have been quickly and unceremoniously transferred?

Working closely with the Municipal system has made it clear to us that the Government works to keep the status quo. Those who were seen to be supporting reforms have been instantly removed.

Empower Smart Governance for Bangalore to be a Smart City

With the latest obsession of the Government to pitch for the Smart City status, the wisdom of this decision of transferring a performing officer who would have accelerated the City towards a city with a Smart Solid waste management system is questionable.

Build and protect public assets: Solid waste management in the city has led to a creation of a 3750 tonnes per day processing capacity, a creation of an asset value of about Rs 440 crores, there is a further investment being planned in building in-house collection and transportation fleet of another few hundred crores. There is an existing outflow of about 300 odd crores into the Operations and Management expenditure and Collection and Transportation. The decision to remove an honest, upright officer who was showing the willingness to be a gatekeeper of these public assets appears to be devoid of thought and wisdom.

Build expertise: Having worked in the area of Solid Waste management since 2009, we can say with conviction that it needs expertise and leadership to build, manage and implement    the evolving modernization, upgradation in the Municipal Solid Waste Management Systems.  This can only happen if the Government grooms good officers through position, power and continuity

Build accountability: Constant change lends itself very well to passing the buck. Smart City Governance needs accountability which can only happen with allowing an officer to really take charge and keeping him accountable.   If anything, remove erring officers not those that are seen to deliver.

Build data driven, transparent systems: Finally we were beginning to attempts at data-driven reporting and a move to bringing in widespread dissemination of information to the public, which would help in dismantling the deep corruption and the cartelization. It will take some time to undo the prevalent bad practices and can only be done by strong-willed officers.

This officer has given no reason in his work in the last eight months to show that he is not capable of the above. If anything, he has proved on several occasions that with time he would be able to deliver what the city needs.

Removing this officer if anything, discredits the Government’s intention of achieving Smart City status for Bengaluru.

This is a petition from citizens who are deeply concerned and agitated with this latest move to transfer within eight months BBMP SWM Special Commissioner Subodh Yadav. We see it as representative of the Government’s lack of intention to bring in sustainable solid waste management to the city and deprive its citizens of clean air, clean water and clean surroundings.

About Sandya Narayanan 8 Articles
Sandya Narayan is a citizen of Bengaluru, and a member of Solid Waste Management Round Table (SWMRT)

At the Vasanthnagar debate on Mar 22nd, five candidates responded to hard questions on roadwidening, Akrama-Sakrama, language on bus signboards and more, moving beyond responding to grievances on water, parks, roads, garbage and electricity.

With the Karnataka government planning to initiate proceedings against Justice Adi, citizens are rallying in his support.

How do we remind people (of) their civic responsibilities?

A retired academic finds some children than their parents. She wonders if we can change adult attitudes for the better.