Feel you waste time at bus stops? Plan your trip with our app, you’ll get to the stop just on time for your bus https://t.co/IgAjglMCsC pic.twitter.com/Dq1YOtA2R3

But does the ITS actually work as it should? The official ITS mobile application was released in May 2016 with much fanfare. The BMTC claimed that the app would help commuters track their buses in real time. Initial reviews by the consumers were far from positive, most complaining about the non-linear user interface and buggy response.

Citizen Matters had written about this app that is supposed to make life easier for commuters, when it was launched an year ago. When issues were pointed out, Bishwajit Mishra, Information Technology Director of BMTC, had said: “We have just started. It is a complex system and it will take some time to stabilise. I request everybody to have some patience. The issues will be rectified and the system will be stabilised in 3-4 months.”

After 12 months, we went back to the app to see the progress.

“We have just started. It is a complex system and it will take some time to stabilise. I request everybody to have some patience. The issues will be rectified and the system will be stabilised in 3-4 months,” says Bishwajit Mishra.

There are four features that this application boasts of.

Even after the recent Version 2.7 update, the issues with the app are noticeable right from the start. On a steady 4G Airtel connection, the load screen lasts for a whole minute.

The aesthetics of the app now looks rather clean. The options are presented in coloured boxes. There is also a useful option to change the language to Kannada, but the option doesn’t work as expected. People who tried opening the Kannada section got to see English text.

The home screen quickly notifies you if there are updates in bus routes, which may prove to be convenient to some users.

Then we tested a real life scenario on the app. To go from Maharani College to Little Italy, Indiranagar, Google maps showed very clearly that one has to take a bus to St Martha’s Hospital Bus Stop, and take a bus from there to Domlur. But when searched for St Martha’s Busstop on the BMTC app, it had no record of any “St Martha’s” bus stop.

The bus stop exists on ground, but the ITS app didn’t show it. Though, it should be noted, that when we reached out to the IT Director of BMTC, the bus stop was immediately added to the app. 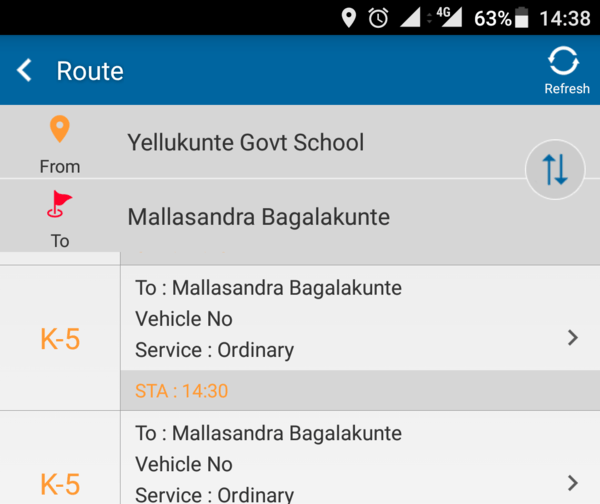 When we check for nearest bus stops, the app shows not only the nearest but all busstops nearby. This application requires your GPS location, then why can’t it detect the closest location? That will remain a mystery.

When one tries to locate buses on route, the app crashes on a few mobiles. If you want to get information regarding buses arriving at airports and major bus stands, on clicking the app, it redirects you to a website with information that you could have accessed without downloading this application at all. And the trip planner part – it is shows the buses that connect two stops, but it can’t guide you to take multiple buses. This app that is incredibly buggy and slow, fails to provide a coherent experience and does not deliver anything new. Many buses that are listed in the app are not seen on the app realtime.

We again reached out to Biswajit Mishra, the IT Director of BMTC, for comment. He said: “These issues are new and are limited to only a few devices. As for enlisting of uncharted bus stops, we are working on that. Maintaining the application is our top priority, and we welcome suggestions and feedback.”

Google Maps is a superb alternative to BMTC, as it provides a more linear and user-friendly experience, with accurate data. It provides multiple routes for added efficient travel. New applications, like YoRide, are more appealing, as it derives data from Google’s servers and showcases them in a fresh format. Apart from that, these new apps also have significant features; like approximate ticket prices and the choice to book a cab, directly from the application. Both, Uber and Ola are supported.

What all this means is, if BMTC does not up the ante, it may lose out on the audience altogether. Bengaluru-based Datameet community had engaged with BMTC regarding ITS, giving them pointers, list of suggestions etc., but BMTC doesn’t seem to have taken any of them seriously.

Meanwhile, news reports mention that BMTC will be releasing real time data by end of May. “The data, generated by thousands of buses moving across the city, promises to help understand traffic patterns, punctuality and other parameters like skipped bus stops and breakdown locations” will be shared by the BMTC, according to reports. With not all the buses still online on the app, it will be interesting to see the credibility of this data.

Note: Arundam Deepak Sinha, an intern with Co-media Lab, contributed to this article. A different version of the article appeared first in the Bengaluru Beat section of Co-media Lab.

All you need to know about BMTC’s Intelligent Transport System

Pasta or Pav bhaji? Roti or Ragi mudde? How Bengaluru’s schools and students deal with food

As children increasingly consume junk food, some Bengaluru schools have adopted strict policies to ensure that their students eat healthy. These schools’ policies range from providing food cooked at school itself, to replacing any junk food children bring from home