When a candidate contesting from a ward X in Bengaluru visited one of the houses during his door-to door campaign on Thursday, he had to face the wrath of residents. A house owner yelled at him and his supporters: “Why have you come now? Post election you won’t be seen anywhere. Election ada mele neevu pudaarigalu moote kattikondu hogthiri (You politicians will pack your bags soon after election).” Unmindful of her reaction, the candidate continued to ask for votes with a smile and humble look intact on his face.

In a neighbouring ward Y with many posh houses, another party candidate flanked by a few party workers, too tried hard to woo voters. It is a last opportunity for him to meet voters at their doorstep. Unfortunately, most of the house doors in the locality are shut, with residents away at work. That doesn’t disappoint him. “I reside in this area and they all know me well,” he says confidently, as he drops off his party pamphlet at the doorsteps. 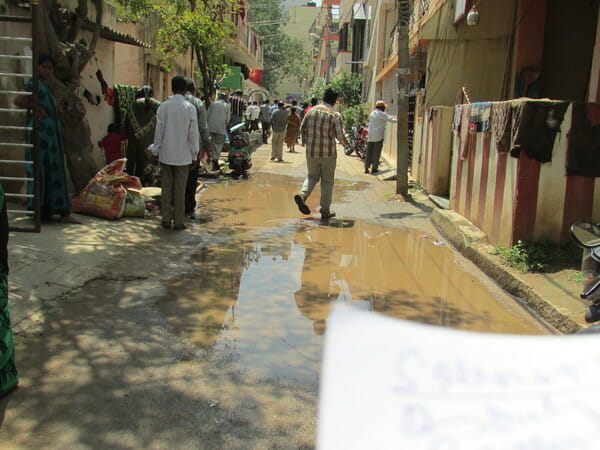 A candidate and his supporters on door-to-door campaign in Ejipura on Thursday. Pic: Akshatha M

In the quiet neighbourhood of another nearby ward Z with more low income citizens, a woman candidate was visiting voters houses along with her husband. Though she represents a national political party, unlike most other candidates, she was not accompanied by party workers. “On the last day, we want to do a low-profile campaigning,” she says. “We do not want to create a public nuisance by visiting houses in groups,” says her husband. In fact, her husband does most of the talking. It is he who starts the conversation and asks for votes. She quietly follows him.

He explains his plans for the ward. Puzzled, we ask him, “Why are you telling me your plans? Your wife is the candidate, not you.” He ignores the comment and confidently says, “Madam, it is all one and the same. People in this area know me well. They call me Anna. I am sure they won’t let me down, they will vote for me.”

Clad in a white shirt and a gold chain, with belly straining against the buttons of his shirt, a candidate walks through the Railway Quarters in yet another ward. He is accompanied by his daughter and three party workers. As we make our way through the muddy roads, his sneakers are a sign that he has come prepared to walk quite a distance. As we move from house to house, handing out pamphlets, he says to the voters, “Vote for party _ and I will do a good job”. There is however no mention of what his plans for the ward are.

His daughter is sent to knock on the door and make sure that the residents are presentably dressed. The candidate then makes his way forward to appeal to the voters to choose him. Most voters politely collect the pamphlet from a party worker and say “Sure,” but don’t really seem convinced about the candidate.

An old lady crosses us and the candidate seems keen on convincing her that he deserves her vote. Even as she makes an attempt to move away from the group, the candidate turns ever so slightly to force her to listen to him just a while longer. On the road, we bump into campaigners from a rival party. Both groups avoid each other, and choose two different lanes to walk through. 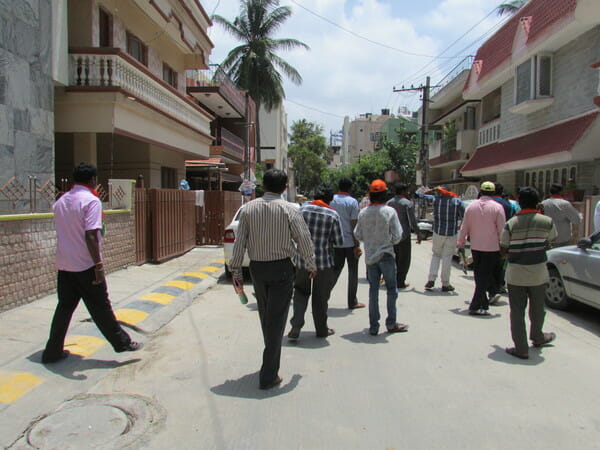 A candidate and his supporters on door-to-door campaign in Koramangala on Thursday. Pic: Akshatha M

Rattling the name of a rather generic-sounding NGO, he says, “I am a social worker and have registered a trust to distribute books to underprivileged school children.” We ask him how much he has spent on his campaign and he says “Rs 20 lakhs.” We then remind him of the cap of Rs 5 lakh on expenditure and he says, “I have not spent that much. But it costs money to feed all the party workers who are campaigning with me, then there are pamphlets to be distributed, and transport costs.”

Interestingly, the candidates from the big three parties in this particular ward are Hindu, Muslim and Christian. Being a Hindu, he says, “It’s a bit of a challenge here. The vote bank will be split three-ways on the basis on religion alone.” His daughter adds, “Who knows who will get elected?”

Even as the candidates made their final attempt to woo voters on Thursday, which was the last day for door-to-door campaigning for this council election, they received bouquets and brick bats from the voters. In fact, there were less of bouquets and more of brick bats. Voters either just ignored the candidates or came up with a list of complaints in their area.

When a candidate from the Y ward visited a house, a resident Sudarshan said that while he will not get into an argument with the candidate, he has decided not to vote. The reason: elected representatives turn blind eye to the problems of residents after they come to power. “I am residing in this area for the past 28 years and I have voted in every election. But what is the use? None of you will lend your ears to our problems once you are elected. Due to lack of a drainage system, rainwater gets clogged and enters our compound, dirtying the sump. Can we spend thousands of rupees every year on cleaning the sump? I am fed up of all this,” he told the candidate.

Another resident, Shyam Nichari said that the corporators once elected, are not available to the public. Their phones will be switched off all the time. He also asked the candidate if he can take action against paying guests in the area if he comes to power. “These PG owners boss around despite running illegal PGs, by not paying tax to the government. In fact, the PGs here are run by former corporators. Will you bring them under control if you are elected?” he questioned the candidate. The candidate, who has no other option but to say yes, agreed. “I will not give you false assurances. You vote for me and then we will talk,” he said.

As the canvassing group proceeds, they get upset about the presence of a boy on a bike who is standing at some distance and observing them. The group says that the boy is the nephew of rival candidate who has been following them to know their campaign strategies. “The other party candidate has got into such cheap tactics. That boy is here to snoop and pass on the information,” they begin to rant.

In the narrow roads of ward X, a candidate flanked by a huge group of supporters was campaigning at a high speed. A supporter proudly tells that over 100 people are following the candidate. We ask him, “Is it not the violation of the election code of conduct?” He replied that the candidate has many admirers and they all want to be part of the last day campaigning.

We spot an old woman among the group of supporters. Under the scorching sun, 72-year old Alalamma walks briskly behind the candidate. When asked why she is participating in an election campaign at her age, she quips “Avru duddu kodtharalwa? (They give me money, no?)” The conversation is abruptly stopped by another ‘supporter’ who warns her not to discuss such matters with others.

Not just residents, even candidates are greeted by pamphlets of other political parties scattered around the house premises. An indication that rival party members have already visited the house seeking votes, and the voters have not really bothered to keep the pamphlets aside.

This too does not deter the candidates. They go on asking for votes irrespective of the treatment they receive. At one point a candidate told a resident, “Do not forget to vote for me on Saturday.” The resident retorted, “You too should not forget us after election.”

Candidates are also versatile when it comes to language. Well-versed in three languages – Kannada, Tamil and Telugu, they switch from one language to another quite easily, depending on residents’ needs. A good tactic to convince the voters to vote for them.

Certainly, money is flowing like water this election too. Perhaps, political parties and candidates have set aside fixed amounts to be given to the media for election coverage. On the campaign trail, I (Akshatha M) experienced two such instances when the candidates offered me money. This is not new – I was offered Rs 2000, whereas my predecessor, Vaishnavi Vittal was offered Rs 500 during the last BBMP elections in 2010. Blame inflation, the rates seem to have gone up!

In both cases, I had explained them at the beginning, that I was not going to write about them and that I was just following them to understand the pulse of candidates and people. Despite that, in the first instance, when I was about to leave, the candidate asked me “Madam, nimge swalpa duddu kodla? (shall I give you some money?)”.

In the second instance, when I told the candidate that I was leaving, he tried to stop me thrice. Having learnt from the previous experience, I almost sensed what was in store. Even as all supporters were standing around us, he tried to hand over wads of 1,000 rupees notes. “Nam jothe bandiddake thanks. Idan thagolli (Thanks for coming with us. Take this),” he said.

In both the instances, I clarified to them that the Citizen Matters does not entertain paid news and I did not accompany them for the sake of money. Having said that, it was an embarrassing moment for me, as well as the candidates. I was embarrassed for having been judged wrongly and they looked embarrassed, probably for making a judgement error.

‘Cash for coverage’ comes to BBMP elections too
Delinking revenue and news coverage: The way to go for journalism?

How Mayor can make Bengaluru better

From the idyllic city that Bengaluru once was, the transformation has been significant. One cannot bring back old Bengaluru. But what can be done to improve the city?

The Ugly Indian gives a brief of the other world that lies beneath Bangalore’s roads and footpaths.