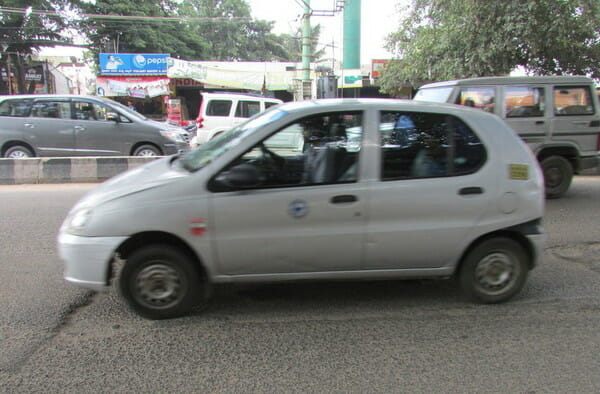 Taxi aggregators have brought a change in the commuting pattern in the city.

Recently, on a late evening, I waited for an auto/cab at HSR Layout that can take me to Gandhi Nagar. At the auto stand, the driver says: “No meter madam. Gandhi Nagar is far,” hence he demands 500 bucks. I let go of the option and stop another auto on the road. This driver tries to strike a deal for Rs 350. I let go of this too. Then I try to search for a cab/auto in Ola app. The auto driver takes me to Gandhi Nagar and the bill comes up to Rs 160. Even if I had traveled by Ola taxi, it wouldn’t have cost me more than Rs 200.

Since 2011, the year in which taxi aggregators entered the Indian market, they have brought a change in the commuting pattern of the city-dwellers. Reportedly, Ola, the leading taxi service provider in India, is adding 1,500 cars and autos everyday to its fleet in over 100 cities, reflecting the ever-increasing demand for tech-based predictable transport system.

Regular Call Taxi/App-based services: Regular call taxis like Meru, Mega, Easy cabs were quite popular before the advent of app-based taxis. Call taxis are just a phone call away, or customers can book them by visiting their websites. App based services like Ola, Uber and TaxiForSure too started off with online booking five years ago, but have now developed into GPS-enabled app-based services. Here customers can download the app from google play store and book the cab by entering the location and destination.

Shuttle services: ZipGo was the first app-based firm to start shuttle service in Bengaluru. It was followed by Ola Shuttle. Both these services are app-based. The 12-seater GPS enabled maxi cabs allow the users to check seat-availability in the vehicle plying to their destination. They can block the seat and travel comfortably in the maxi cabs, for a rate cheaper than taxi and higher than BMTC buses. However, owing to RTO raids against shuttle services for violating transportation rules, now ZipGo has changed its service pattern from shuttle to point to point.

Shared rides: Shared rides have become a prefered mode of transportation among taxi users. While Ola, Uber and Ride Ally are app-based shared ride aggregators, companies like Rideshare offer web based services. The commuter can share the taxi ride with co-passengers who are traveling towards the same destination. Supposedly, shared rides workout 30-40 per cent cheaper than fully hiring a taxi.

World Resources Institute India and Ross Centre for Sustainable Cities conducted a survey in Bengaluru last year on how shared mobility has changed the commute pattern in Bengaluru. While the survey report is not out yet, Jyot Chadha, Head of Initiative to Catalyze Urban Innovations, who led the research team, says that inserting more technologies into transport service is the need of the hour.

There is no ground to calculate or prove that the app-based taxis have reduced the VKT (Vehicles Kilometres Traveled). Though there is a possibility that these taxi services could impact the commuting pattern, the research could not draw a conclusion yet on exact changes in the commuting trends, due to unavailability of data from the taxi aggregators. While the app based taxi services have provided additional transport options for commuters, they have also added to the congestion, she says.

Clearly, the app-based taxi aggregators have been found to be a good alternative to those who were using personal vehicle for commuting before. These taxis are not an alternative to buses due to affordability factor. A lot of people Citizen Matters spoke to have shifted from commuting in private vehicles to using app-based taxis and autos on a regular basis, whereas, those who were using bus for their regular commute have not shifted to autos or taxis yet, except that they use it occasionally.

The service providers have been trying to grab the market through predatory pricing. The free rides and cheap rides which they used to offer initially, were slowly replaced by surge pricing, which has not gone down well with the customers. In Bengaluru, the issue of surge pricing has now become a bone of contention between the State government and the taxi aggregators. With it, the commuters too are facing the flip side of the service.

Sourav Khanna, who works in an advertisement agency, started using Ola and Uber for he felt they are more comfortable and cheaper mode of transportation compared to regular autos. But off late he prefers regular autos over taxi aggregators, specially for short travels because they are easily available and the cheaper than the aggregator’s surge pricing (which is not legal-more on it in the next part of the story). “Surge pricing is too expensive. It has become a looting business for the cab companies,” he says.

Yet another glitch that a lot of customers are facing, is the drivers refusing to pick them for the trip. Swathi Ram who often uses Uber and Ola has the following observation to make: “There are two issues which I am unhappy about while using the taxi aggregators service. One is surge pricing, which is almost unaffordable, and the other is the drivers not picking the call or refusing to make the trip.”

So why is that the drivers tend to ignore the requests? A Bengaluru-based blogger Sandeep Nanu, in his blogpost on “from an ardent fan using Uber only when I absolutely have no other choice,” assumes that it has to do with the kind of incentive that the driver gets.

“Notice how one cannot book a ride without adding the destination? That, I believe is where Uber is possibly cheating the poor drivers. My strongest hunch (with inputs from drivers) is that the app algorithm selects drivers based on the destination. The driver who needs to make the number of trips (to receive incentive), gets the farthest destination request. The person with monetary targets, gets the shorter ones. This makes it almost impossible for the drivers to meet their daily targets. So don’t be upset or surprised with the – Sir, can’t do it, it’s too far statements from the drivers.”

During last one year, there has been quite a lot of development in the taxi and shuttle aggregators services. While Ola and Uber have introduced ride-sharing option to reduce the fare and as an environment friendly method of transportation, ZipGo and Ola launched maxicab shuttles services a few months ago. The commuters though hailed the services initially, the response isn’t the same now.

Commuters are disgruntled over the excess surcharge imposed on them, drivers not accepting the ride request and issues with share riding. Venkatesh Gangkhede, a city-based techie says most of the days, especially on Outer Ring Road, the Ola app shows lot of cabs in his location, but none accept the ride request as he doesn’t opt for sharing the ride. “I shifted to ZipGo, but they seem to have reduced the frequency of the shuttle service. Now I am dependent on BMTC,” he says.

There is a reason why the drivers prefer a commuter who opts for share ride than solo ride. If the taxi transports three persons at a time, it’s equivalent to three rides, which in turn helps him get the incentive easily with less fuel and less time.

But then the commuters feel ride-sharing comes with problems specially with drivers doing wrong matches. Take the case of Ramesh Agarwal, Chief Operation Officer at a start-up. He opted for ride-sharing as he thought it would help him cost-cut and for environmental reasons.

But he has been having bad experiences with car pooling. He narrates one such instances where he had to travel from Koramangala to KSPCB office in Rajaji Nagar and he opted for shared ride. “I had no idea where the driver was going to pick other customers from. Then it so happened that the driver diverted his route to Indira Nagar to pick a customer. It took me one and a half hour to reach my destination which I would have otherwise made it in 45 minutes. At the end of it, all I saved was some 30-40 bucks,” he exclaims.

An annoyed Ramesh vented out his anger on his Facebook page. He wrote, “Dear Uber, looks like you forgot your management 101. You incentivise the cab driver to take pool (because you pay incentive based on number of trips), but you disincentivise the passenger to take the pool by making crappy matches which double their commute time. How the hell do you expect it to work?”

How safe are the rides?

In May, a woman traveling from HSR Layout to Domlur, filed a complaint with the police accusing an Ola cab driver of misbehaving with her. The incident occurred close on the heels of a similar situation reported from Delhi, where a Belgian woman was molested by a Ola cab driver. Though, in many cases the aggregators have been quick enough to detach such drivers from the service, nothing was done to verify the background of the drivers and to take safety precautions to avoid such incidents.

There are also instances of women commuters complaining with the taxi aggregators about the safety aspect in shared rides. According to a news report published in Deccan Herald, Raksha, a regular user of Ola cabs had a bad experience during the ride recently. She had booked a shared ride at 11 pm. She had to stop her journey mid-way and take an auto to reach home, because all her co-passengers were male and one was even drunk.

In the backdrop of the cab aggregators disassociating themselves from the drivers’ behaviour towards customers, the Karnataka in its On-demand Transportation Technology Aggregators Rules, 2016, added a few safety clauses. The Act makes it mandatory for the taxi to display a board with drivers details such as name, photograph, driving license, badge particulars and ID card issued by police authorities. The car should also have a panic button for the use of passengers.

With the on-demand taxi services changing their equations and having their pitfalls, will the customers stay loyal to the taxi aggregators or end up returning to the old system of commuting, is a thing to look for.

Bengaluru’s lost crop varieties: How we are missing out on local, nutritious food

Many local, nutritious food varieties in Bengaluru have nearly disappeared over time. While millets like ragi are now making a comeback, there are still several crops we have not even heard of.

A petition filed by a group of former vice-chancellors of University of Agricultural Sciences (UAS) and others against BBMP’s link road will be heard on September 23rd 2009.

The dates may not yet be set for the MLC elections, but campaigning has heated up. Loksatta candidate Ashwin Mahesh is out urging graduates to register.