With increased demand for Aadhaar cards and the urgency among people to get the card, the Unique Identification Authority of India (UIDAI) has taken initiative to provide the cards electronically. Now you can get e-Aadhaar card, without having to wait for the UIDAI to send the card to you.

Though this service was introduced a year ago, not many know about it. Sources in the E-governance Department which has been entrusted with the task of providing this service say that they do not have numbers available on how many e-Aadhaar cards have been issued.

E-Aadhaar is a softcopy of your card, that you can see on the UIDAI website; you  can take a printout of this pdf file on an A4 sheet and keep it with you, just like you would download any other form or document.

Officials point that it is not a substitute to the hard copy of the Aadhaar card which is issued by the UIDAI, but is equivalent to it.

Aadhaar acknowledgement is issued to a citizen after he/she enrolls with UIDAI. The Aadhaar card gets generated within 3-4 weeks after all the details are collected by the e-governance officials.

However, there is an inadvertent delay in physical Aadhaar card reaching people, sometimes it even takes many months. This is because of postal delays, printing delays or many other factors. For faster service to people, e-Aadhaar was introduced, say sources in UIDAI.

The UIDAI has issued directions to all offices including state and central government departments and banks that the e-Aadhaar card copy is equivalent to the Aadhaar card. It should be treated as a valid document, as it has been signed by the authorised UIDAI official. The card holder need not self-attest the e-Aadhaar card print out, while submitting it anywhere.

E-Aadhaar card is an additional service for citizens to meet their immediate requirements like in case of banks. The Aadhaar card will also reach the applicant by Speed Post in due course of time.

How does it work? 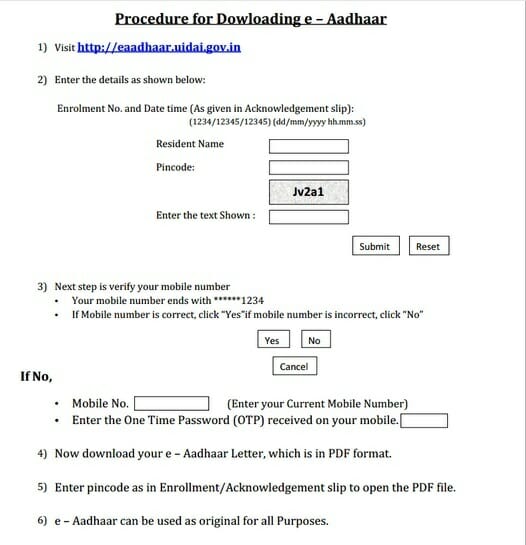 CEO of e-governance department, Dr D S Ravindran says, printouts of the e-Aadhaar card can be taken either by the applicant himself or he can visit any of the citizen services, Bangalore One or Karnataka One centres, where this service will be chargeable at Rs. 9.

If you go to any cybercafé, they charge even higher. There is no fee to be paid if you are taking the printout yourself at home.

Everyday 1.2 million people enroll for Aadhaar cards, of which 22,000 are from Bangalore. How to get an Aadhaar card, click here.

A tale of two cities: Seattle and Bengaluru

Here’s a comparison between two city administrations lying on two sides of the globe – Bangalore and Seattle. While one has more autonomous structure, other is controlled by the state.

If you have shifted residence recently you may not be able to vote in the coming assembly elections. This is just one of the issues with the recently published voter list. Bangaloreans have filed a PIL asking the High Court to intervene.

Developed or hodge-podge, you decide

Why is Bengaluru a supreme mix of the planned Jayanagars and messy Srirampurams? How does flooding happen despite the many valleys flowing out? Is it worth buying a revenue site here? Read on.