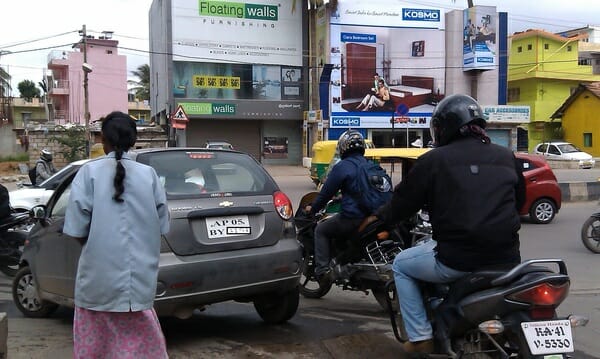 You move in to Bengaluru from another part of India. You plan to move out after a few years. Along with everything else that you have to do to stay in the city, there’s something important you need to do: Re-register your vehicle and change the vehicle number. But is this a fair demand always?

Karnataka government laws mandate vehicles staying in Karnataka for more than 30 days to pay lifetime tax in lump sum, and then withdraw the balance amount from the government of the city where the vehicle was registered earlier.

Ankur Jain (name changed on request), an IT professional, a native of Delhi, has been using his Delhi-registered car in Bangalore for past 2 years. He would be moving out of Bangalore in next six months. But he has been affected greatly by the rule. He says, “ As per the rule, I’m expected to pay road tax which is 1/4th value of my car’s present value, which itself expires after four years… This rule is pretty stressful for thousands of techies who are always moving into different states.”

Bangalore has 6725 BMTC buses, which are insufficient to handle the task of providing quick and comfortable transportation for all. Auto rickshaws are an alternative, but may not be affordable to use everyday. Many are just more comfortable driving their own vehicles. The process of re-registration is now a problem for those who get transferred or change jobs.

A group of people have taken their concerns over re-registration of vehicles through a petition to Chief Minister of Karnataka Siddaramaiah, requesting him to rationalise the rules regarding to road tax for registering a non-Karnataka vehicle in the city.

The petition points that most of the floating population in Bangalore is here not for a long term. They come here for some project or studies which last for two to five years maximum. The petition requests the government to reduce the duration of road tax from 15 years to a 1 or 5 years, for a non-Karnataka registered vehicle.

“When we go back to the parent state, it is not that easy to get a refund from RTO. Re-registering vehicles all the time when we move from one state to another is difficult. It is not feasible for all to pay life time tax to each state they are moving in,” says the petition.

Did Karnataka neglect the orders of Union Ministry?

The petitioner refers to the 35th deliberation of TDC ( Transport Department Committee) held on 23rd October 2013, where the along with Ministry of Road Transport and Highways, Karnataka’s Transport Minister and Department Commissioner were also a part. In this, the committee decided to rationalise the road tax to 6%.

However, instead of following the recommendations given by the committee and the subsequent orders given by the Union Transport Ministry, the Karnataka government on February 2014 amended the Motor Vehicles Act to pay the life-time tax if the vehicle runs in the state for more than 30 days from the date of entry.

The petition objects to this: “The timeline of 30 days is too short for IT industry people as the project may last anywhere between two to five years. So, asking the people to pay 15 years’ life time tax for the stay of two years is something not feasible.”

The petition continues, “If the Karnataka government doesn’t want to stick to the rationalisation of taxes, paying annual tax for non-KA registered vehicles should be brought in. This will entertain people to voluntarily come and pay the annual tax, and it is a win-win situation for both public and the government.”

In June, Bangalore Traffic Department had initiated a drive to penalise non-Karnataka vehicles in the city. In this, 100 vehicles were booked and almost 1 crore was collected as fine. There have been several incidents of alleged harassment cases reported on the facebook page, Justice for Non KA Registration Vehicles, which has united 6,534 non-Karnataka registration users in Karnataka.

Waseem Memon, crusader of this fight, approached Supreme court on Tuesday, 9th September 2014. He will also be holding a press meet soon, to explain the “atrocities” meted out to them by Karnataka Road Transport officials.

Also Read: How to re-register your vehicle in Bengaluru

How to re-register your vehicle in Bangalore

BMTC’s communication design: How does a newbie navigate?

How does BMTC communicate to commuters? How easy or difficult to figure out routes and bus timings using this communication system? How efficient is this?

One year later, BMTC’s updated ITS continues to disappoint

After an year of its launch, BMTC’s ITS system continues to be bug-ridden and not-so-useful. Shouldn’t the BMTC redeem itself by fixing the app and making it functional?

ZipGo? or BMTC? Or both? Or more? You decide and support!

What does Bengaluru need? Public transport? Private? Or a vision plan where all types of transport act complementary to one another? Decide, and support the cause!