BWSSB Chairman Gaurav Das Gupta declared that the peripheral areas of Bengaluru do not and will not have water for the upcoming years.

Gaurav Gupta was taken on by veteran bureaucrat, former additional chief secretary of Government of Karnataka, V Balasubramanian, in the discussion ­The Critical water situation in Bangalore- The way forward conducted by Bangalore International Centreat Domlur.

Both of them discussed the alarming water crisis in Bangalore and its consumption. It was moderated by former chief justice of India M N Venkatachalaiah.

In the wake of acute water crisis, BWSSB Chief told the gathering: “If you are taking a property in Bengaluru, especially in the peripheral areas, take at your own risk! We really don’t have water for those areas.”

He said, plans are there to provide water for the areas in the peripheral of Yelahanka, K R Puram, Kengeri etc. But beyond that the BWSSB cannot supply water. 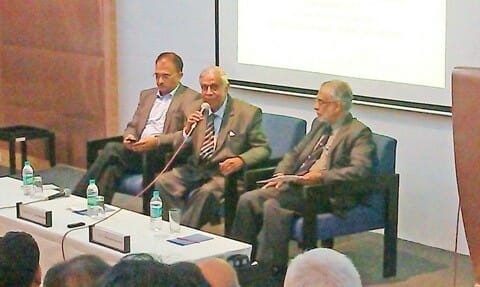 Prior to 1974, Bangalore completely depended on Tippagondanahalli, Hesaraghatta reservoir, Sankey and Dharmambudhi tanks for water supply. Presently Bangalore has only three sources of water: Cauvery, Arkavathi and Vrishabhavathi. Bangalore draws 140 Million Litres per Day (MLD) which has already exceeded its limit of 90 TMC as fixed by the Central Cauvery Water Tribunal.

City’s lakes have been disappearing at the same speed with which the city’s population is growing, remarked Balasubramaniam.

He said, “City dies when lakes die.” He firmly stated that, “You cannot ‘restore’ a lake by building fences or parks around it. Unless you divert the sewage water, lakes cannot be restored.”

He mentioned in his presentation that, 850 kms of Rajakaluves (Storm Water Drains) that are constructed to divert the excess water from one lake to another are carelessly encroached, destructed, blocked by bus stations, railways, stadiums, golf clubs, big IT parks and apartments.

He said Bengaluru is no more the city of lakes, instead it has become city of sewage tanks. Out of 600 lakes, BBMP claims to have only 189 live lakes. If noticed carefully, the colour of the lake water is bluish or darkish, which is nothing but the sewage water let into the tanks without care. This water gets percolated into the ground water or borewells that contaminate the underground water which reaches your house. The same water is also used by the distilled water bottle manufacturing units, he explained.

Department of Mines and Geology came out with an alarming report in 2011 which said that, 52% of bore well water in Bangalore is non-potable, stated Balasubramanian. The reports also mentioned that 27% of this water contains Escherichia Coli.

Escherichia Coli, also called as E. Coli is one of the four dangerous bacteria that are present in the non-potable water that Bangalore consumes. It is found to infect intestine, thus leading to severe diarrhoea and loss of excess blood, fever etc., he said. Balasubramanian warned the audience that infection by E. Coli cannot be treated by any regular diarrhoea courses as it will aggravate the bacteria.

In the USA, 20,000 people were affected by E.Coli out of which seven per cent of the people died. The only cure for the infection is complete blood transfusion and dialysis.

Public Health Institute studied 1,428 water samples collected from all over the city, both Cauvery water and bore well water, and found that 59% of the samples contained E.Coli and maximum level of contamination was found at developed areas. This is because the sewage water in pipelines that run parallel to drinking water pipelines percolate into potable water due to leakage, and thus contaminates it.

Balasubramaniam told that he had questioned Dr Chidambaram, who is in charge of Microbiology Lab of Public Health Institute, as to why there has been no outbreak of any kind of epidemic due to the contamination. Dr Chidambaram replied, “People of Bangalore have developed immunity as they have been drinking it for 10 years.”

Balasubramaniam remarked that every microorganism has the capacity to develop immunity. he referred to TB and Malaria microbes that have become highly resistant.

The only solution  for the E.Coli is not the Ultra-Violet rays as promised by the aquifers but the ancient method of boiling the at 100 degree centigrade, but even this kills the microbes only partially.

After all the negative news, Balasubramanian showed the audience aray hope as the High Court’s Environment Bench has taken into consideration the study published by Eureka Forbes Environment of Mumbai and called the government to explain the issue. The report outlined that water samples of 52 out of 92 areas surveyed in Bangalore had high level of Total Dissoluble Solids like nitrates, chloride etc.

Counter-attacking Balasubramanian, Gaurav Gupta argued that BWSSB uses chlorine to disinfect and also they have arranged central testing laboratories along with the mobile units. However, the BWSSB is helpless if the real estate mafia constructs buildings without making provision for sewage pipes. 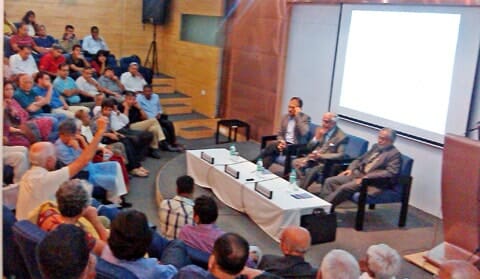 He also mentioned that the BWSSB has taken up the task of replacing the old pipes with the new ones. To augment any kind of leakage, huge water meters are fixed on the pipes and leakage-detecting machines are being used by the department, he said.

Gaurav Gupta didn’t fail to mention the need for funds to maintain the system. He said, there is no budgetary assistance by the government to BWSSB and revision of water tariff will help the department to incur the operation and maintenance cost.

He said, “BWSSB spends Rs.35 crore for electric bills of the three pump houses situated at different stages. Therefore the actual delivery cost  of water should be Rs. 32 per KL but what consumers pay is subsidised rate, i.e. Rs. 9 per KL, as against other countries Singapore and Israel, who pay Rs. 85 to 95 per KL.”

Audience who came from different fields of expertise acknowledged the need to revise the water tariff. Audience said, if they pay thousands for electricity then why not water, which is a necessity. However, Gupta said that the government hasn’t grant him the permission to hike it even after several requests.

Both Balasubramanian and Gaurav agreed that Rain Water Harvesting (RWH) is mess in the city. In specific words of Balasubramanian, it is “a joke!!” Balsubramaniam noted that there are 18 lakh properties in Bangalore, but only 44,000 houses in the city have RWH, out of which only half per cent are in working condition.

Balasubramaniam mentioned that Singapore has met its need of water by creating RWH along the rooftops, roads and open spaces. He said, “60% of Singapore’s water requirement is met by built up area and open areas along the roads.”

Propagating the same idea, Gaurav mentioned Bangalore doesn’t have RWH along the open spaces, but the BWSSB makes it mandatory to people having more them. “If you have water connection and if you are in a site measuring more than 30X40, you need to have Roof Water Harvesting or your BWSSB line is liable to be disconnected, he added.

Funding by foreign banks to keep a check on expenditure

One of the solutions for funding water projects, Balsubramaniam suggested, is to take assistance of the World Bank, Asian Development Bank or Japan Bank of International Cooperation. These foreign institutes will keep in check the resistance and lethargy of BWSSB in completing the works, he remarked. He stressed on the need to have comprehensive schemes, not the contract-oriented projects.

Acknowledging the point, Gaurav spoke about the projects initiated by JBIC and World Bank in the south areas of Banglore and JNNURM schemes, currently the Jaika Project and Under Ground Development Infrastructure projects are in process. The UGD project is expected to complete in 12 months.

Justice Venkatachalaiah concluded the event by acknowledging both sides of the arguments and pointed at Gaurav for not having touched upon the issues raised by Balasubramanian, but nevertheless, he asked the Citizens to be equally involved in the conservation of the water and contribute to saving water by setting up RWH and channelising treated sewage water to the lakes in proper method.

The exodus has resulted in a closer look at the power of people-to-people communications technologies like SMS, as well as social media such as Facebook. Be at this panel discussion at St Joseph’s college on Friday Sep 14th to see the face-off between media power and SMS power.