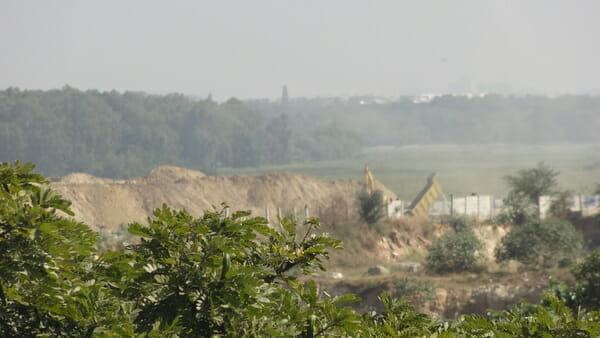 Bruhat Bengaluru Mahanagara Palike issued an order to M/s Manipal ETA Infotech Ltd. (Mantri Techzone Private Limited) directing the latter to stop the construction of the 72-acre project coming up on the wetland between Agara and Bellandur lakes in Bengaluru. This order comes after the Karnataka Upa Lokayukta rapped BBMP on the continuance of construction activities in spite of the lack of proper approvals from BBMP.

The project had got layout approval from the Karnataka Industrial Area Development Board (KIADB) subject to necessary approvals from the local authority. Karnataka Upa Lokayukta Justice Subhash Adi had on Friday (December 20) asked BBMP to stop the construction of the controversial SEZ project, after he came to know the SEZ and the residential buildings did not have the approval from BBMP – the local plan approving authority.

The report on Bellandur wetland by Energy and Wetlands Research Group, Centre for Ecological Sciences, Indian Institute of Science (IISc), Conservation of Bellandur Wetland, had thrown light on the dangers of encroachment of the drain and the importance of the wetland to the ecology of the area. The report was discussed at the meeting.

Concerned residents of Koramangala told Justice Adi that the digging and construction work is going on rapidly. Flood lights are being used to help the work continue even in the night, said one of the residents.

According to BBMP Building Bye Laws, “Every person who intends to erect or re-erect a building or make material alterations or cause the same to be done, is required to obtain a licence from the Authority, BBMP Commissioner or from the officer to whom the power to sanction the buildings approvals is delegated by the Commissioner.”

Also, according to KIADB approval note, Manipal ETA Infotech was asked to seek approval from the local planning authority prior to the construction work.

On the basis of above bye-laws, Justice Adi rapped the BBMP for not taking any action on the builders who seem to have already started construction. “What was the corporation doing when barricades were placed on the boundary and construction work began?” he questioned.

Brijesh Kumar, Chief Conservator of Forest who represented the BBMP, promised to look into the matter and take necessary actions within the capacity of the BBMP.

The Upa Lokayukta sought explanation from KIADB on why they ignored the letter written by LDA to them. In the letter, as earlier reported by Citizen Matters, LDA said that the project which is being constructed on the catchment area of Bellandur lake will have severe impact on the lake and the surrounding ecosystem. LDA also requested the KIADB to take back the part of the land and reserve it as a valley zone.

But the LDA wrote back to KIADB, stating that LDA doesn’t have any authority to stop the construction. The same letter was copied to the Principal Secretaries of Urban Development and Industries and Commerce ministries.

One of the key conditions set by the Ministry of Environment and Forest and the KIADB was that, “natural sloping pattern of the project site shall remain unaltered and the natural hydrology of the area be maintained as it is to ensure natural flow of stormwater.” Also a distance of 30 metres was to be maintained from the Rajakaluve while constructing anything.

However, an inspection carried on July 16, 2013m MOEF observed that the project “will necessarily result in some alteration of hte natural sloping pattern of the project site and the natural hydrology of the area and hence the specific condition cannot be complied.”

Only 5 metres away from the drain!

Residents of Koramangala and the neighbouring areas who also attended the meeting pointed out to noncompliance to the term of not altering the sloping pattern. Justice Adi said, “If the feeding channel is encroached or disturbed, the survival of the surrounding lakes and ecosystem will definitely be hampered.”

Upa Lokayukta told KIADB, that BBMP, BDA and LDA are striving hard to rejuvenate the lakes and the condition of the storm water drains mixed with sewage and untreated water was appalling. Brijesh Kumar said, “Sewage lines will have to be separated from storm water drains. A diversion of at least 100 metres is needed.” Detailed Project Reports for Agara and Bellandur lakes are in the preparation stage.

During the course of the meeting, it also came to light that the amount of space required to construct the two upcoming lines will obstruct the western side construction of the project. According to the Manipal Project plan, a buffer zone of 30 metres is left on the northern side of the project, above which is the Bellandur lake, while 5 metres distance is left from the drain that runs along its western side. This drain connects Madiwala lake to Bellandur lake.

‘Commercial establishment, not an industry’

When Justice Adi enquired about the type of construction, he was told it was an IT park. Justice Adi asked: “How can an IT park be called as an industry? How can hospital, education centre, hotel, residential and commercial complex be included in IT activities?”

The land was acquired in 2004 and sold to Manipal ETA Infotech in 2007. KIADB CEO and Executive member Mohan Chakravarthi acknowledged that the area was earlier demarcated as industrial area, but has now become a residential area. But Justice Adi said, “You cannot build an industry at the cost of public and environment. SEZ is not more important than the lake.”

KIADB representative was unaware of the IISC report’s findings and recommendations on the wetland. He said, “Had I known about it, I would have taken action long back.” He also added that since procurement of land has gone through legal process from the farmers to KIADB and to Mantri with compensation, it will be difficult to take immediate action. Chakravarthi said he will take up this issue at the next board meeting.

Upa Lokayukta agreed to grant time to KIADB and asked to report back within a week. Another meeting will be held later this week, in which T V Ramachandra, IISC Professor who led the research on Bellandur wetlands and the Principal Secretary of Department of Industries and Commerce will also be present.

A lot of citizens who provide us services, like domestic workers and garbage collectors are fighting to get provisions from Bangalore’s ration shops. Officials, NGOs, and citizens met recently on this.

Charged separately for car parking by the builders? You might want to read this!

A week after the Carlton Towers fire, city police have issued a detailed order with deadlines, regarding all buildings (four-storeyed or higher) on compliance with local rules. If you own, lease or occupy such a building, read the full text here.