The issue of institutionalising people’s participation in urban governance has been hanging fire since the passage of the 74th Constitutional Amendment or Nagarapalika Act more than two decades ago.  The hopes of urban civic activists on government enabling increased citizen participation in civic issues got a major blow when the Urban Development Department (UDD) came up with a new set of rules for Ward Committees & Area Sabhas recently. While the new rules hardly include any suggestions proposed by citizens, shockingly a few points that were suggested by citizens and added in the earlier draft rules, were also removed from the draft.

At the High Court hearing on October 31st, the UDD submitted these final draft rules to the Court which asked it to gazette the same and then provide a copy.  Consequently, the final draft rules have been once again gazetted on November 10th, calling for fresh objections from citizens by November 25th.

The government has refused to consider any amendments to the Act suggested by citizens. Veto power granted to the councillors on Ward Committee decisions and the nomination process for selecting the Ward Committee members and Area Sabha Representatives will remain the same.

What are the suggestions not included?

Citizens’ Voluntary Initiative for the City (CIVIC) had suggested that each member of the Ward Committee could be allocated different portfolios depending on his/her expertise and interest, such as SWM, roads and drains, slum upgradation, poverty alleviation, environment protection, etc. Another suggestion was that the Ward Committees should be asked to prepare a five-year ward vision plan as per a Performance Management System (PMS) based on human development and social infrastructure indicators and outcomes at ward level. Targets needed to be set and outcome indicators developed for measuring these. These had been accepted earlier, but are removed now.

CIVIC had suggested the setting up of an Information and Statistics Committee at ward level which will collect the necessary data, to serve as the basis for planning by the Ward Committee. This committee would create a Ward Human Development Index with information on life expectancy, literacy, income levels, IMR, MMR, malnourishment and nutrition status,  number of employed and unemployed persons, BPL lists, eligibility lists for old-age, widow, disability pensions, etc. The Ward Social Infrastructure Index needed to indicate the paucity in the number of PHCs, schools, anganwadis, day-care centres for children in the age group of 0-6 years and their status, workers’ facilitation and service centres, workers’ and migrants’ social rental housing, community kitchens, night shelters for the homeless, etc.

‘Government has to decide on political nominations’

The following amendments were also sought by civil society groups to the Karnataka Municipal Corporations (Amdt.) Act of January 2011 on Community Participation:

But the UDD has refused to consider any amendments to the Act and the Court, conscious of its jurisdiction, has said that it cannot direct a government to make changes to any laws and it was for civil society to negotiate for these changes with the government. 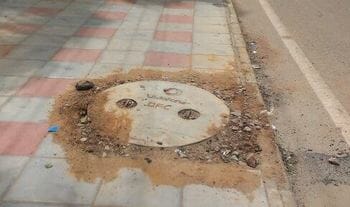 Without a ward committee empowered to monitor and take action, such half-complete works will continue to haunt the city. Pic:whitefieldrising.org

CIVIC also asked for criteria to be prescribed for those aspiring to be Ward Committee members or Area Sabha Representatives, and for transparent and democratic procedures to be put in place for their mode of selection, as even the nomination process should not be on arbitrary grounds. Applications or nominations from citizens of the ward for serving as ASRs and Ward Committee members could be called for, objections to their nomination or selection sought, and a committee of distinguished citizens to select the most suitable persons, were among other suggestions.

Currently, the Ward Committees have not been given any financial powers. CIVIC has been demanding that 40% of the BBMP budget should be given as untied fund for Ward Committees to plan and utilise the money for their wards according to their own priorities.

Bureaucrats generally tend to say that it is not possible to consult every citizen before decisions are taken on issues, such as the CDP of the city, the city’s budgets and fiscal plans under the Karnataka Local Fund Authorities’ Fiscal Responsibility Act, on mega-infrastructure projects, privatisation policies and other issues.

To bring in true transparency, there is a need for Ward Committees to make available at ward level all items of information about the ward, minutes of Ward Committee meetings, details of properties, revenues collected, ward budgets, accounts, programme of works, work orders, bills, vouchers, muster rolls, etc. All suo motu [RTI 4(1)(b)] information needs to be available in the form of booklet/pamphlet, etc. at the ward office.

To effectively decentralise functions, Area Sabhas need to plan, prioritise, monitor, and social audit all works. Their decisions need to be final as is the case with grama sabhas. Ward committees should be able to supervise all institutions in the ward, that are in charge of ensuring  fundamental rights, such as the ration shops, PHCs, dispensaries, family welfare centres, primary schools, anganwadis, day-care centres for children and the elderly, livelihood centres, etc.

‘Vote out the councillor who does not hold meetings’

Similarly, members of the Ward Committees and Area Sabhas who do not attend three consecutive meetings without prior notice and valid reasons should be disqualified from the membership.

To establish local control over assets, resources and decision-making, it was recommended that for projects, which require environmental clearances, public hearings, land acquisition, privatisation of services, displacement of residents, zoning changes, etc., the Ward Committee and area sabhas should receive detailed project reports, including their cost-benefit analysis, environment and social impact assessment reports, survey details of affected persons from the neighbourhood, etc. The Ward Committee/Area Aabhas should be given three months’ time to give their opinion and their feedback considered while taking decisions.

It is not too well-known that an alternative Model Nagara Raj Bill, called the ‘Parivartan Bill’,  had been prepared by Anna Hazare, Arvind Kejriwal, Medha Patkar and others; this advocated total direct democracy by citizens, rather than the ‘participatory democracy’ put forward by the government’s bill of the same name.

The Parivartan Bill proposed that the Area Sabha should have the power to allow/disallow any commercial or industrial activity or any land-use conversion or acquisition of any land and the terms and conditions on which it is allowed; to decide the public purpose for which land is being acquired; to allow/disallow removal of a slum /displacement until those being removed are resettled, to get all encroachments removed from public land; to have first right and control over all natural resources in its jurisdiction, such as land, CA sites, water, lakes, etc. Whether such direct democracy should be accepted in our ‘representative system’ needs a wider debate.

A bane of current municipal affairs is the lack of an effective and timely grievance redressal system at ward-level. For this, CIVIC had recommended the adoption of the provisions of the  Right to Hearing Act of Rajasthan. The Ward Committee should review on a weekly basis at a public hearing every Friday, between 12 noon and 3 pm, all grievances and the delivery of services within the time limit, as per the standards stipulated under SAKALA and the Citizens’ Charter, giving the complainant citizen or applicant the right to be heard.

Written replies on every grievance should be provided to the complainant within 21 days, stating reasons for rejection of an application, if any. The Zonal Commissioners of the municipal corporation should review on a fortnightly basis any escalated grievances about the delivery of services which are not redressed by the Ward Committee.

Unless Ward Committees have the power to impose financial penalties on ward-level officials with whose functioning the Ward Committee is dissatisfied, and unless they also have the power to terminate contracts, such as garbage and road contracts,  if the contractors fail to perform properly, effective decentralisation cannot happen. If all such tasks are to be approved and sanctioned only by the Commissioner or higher-level officials, despite having Ward Committees, the red-tape and delays in decision-making will continue.

CIVIC’s rallying cry now is for a committee to be set up to go into the entire gamut of issues related to implementation of the 74th Constitutional Amendment in its true spirit, to make transparency, accountability and people’s participation effective in urban areas. Such a committee has already been set up under the 73rd CA or Panchayat Raj Act by the Rural Development and Panchayati Raj department.

CIVIC wishes to request all RWAs, CSOs and NGOs to write to the Secretary, Urban Development, Vikasa Soudha, endorsing the above suggestions and demanding that a committee be set up to review the Act and Rules.  The last date for submitting the objections and suggestions to the Rules is 25th November 2014.  CIVIC is also calling for a protest at Town Hall on 25th November 2014 against the weak Act and Rules and wants all civil society groups to join the protest.

BBMP Ward Committees should be inclusive

To reach beyond what we think is possible

Those of us among the minority of concerned citizens who despair over the state of the city’s affairs, let’s see how we can reach beyond what we think is possible.