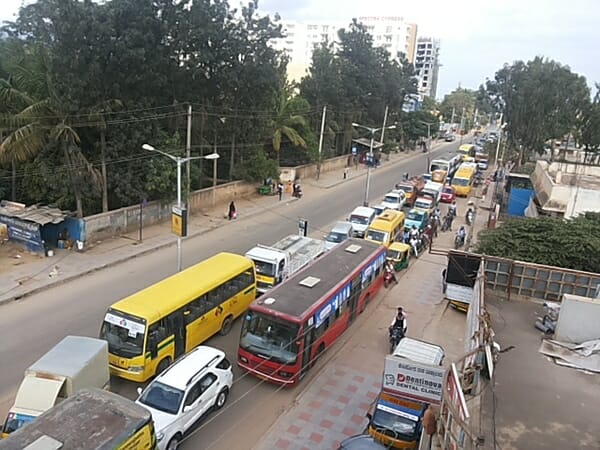 This is the beeline of vehicles on Varthur Main Road near Kundalahalli Gate. Trains have the capacity to take some part of this traffic off the road. Pic: Shree D N

Vaidyanathan Narayanan works in a company in Whitefield. He takes the 9.05 am Namma Metro service from Ulsoor and reaches Byappanahalli Metro station at 9.14 am. Then he quickly moves towards the Baiyappanahalli Railway Station via the newly built footbridge, and reaches the station at 9.17 am. He waits for the Arakkonam train that comes in between 9.20 am to 9.30 am.

He reaches the informal train stop behind Prestige Shantiniketan apartment at around 9.40 am – 9.45 am. From there he takes a shared auto to his office. He starts back home from his office by 5.40 pm, catches the 5.57 pm train and reaches Baiyappanahalli between 6.15 pm and 6.20 pm, gets into 6.30 Metro and reaches home maximum by 6.45 pm. Every minute counts in his journey, and is spent fruitfully.

Every day, an estimated three lakh people — yes, THREE LAKH people, working in IT, travel to Whitefield, from other areas of Bangalore, according to Whitefield Export Promotion Park Industrial Association (WEPPIA). Add to this those working in Textiles and other segments, the number is really huge.

Traffic situation here is already bad, and is only going to worsen. The digging for the Metro Phase II and signal-free flyover at Kundanahalli gate is scheduled to start in January 2015. The very thought of dug roads and traffic raises the blood pressure of the citizens here.

Earlier in 2012, WEPPIA had requested BMRCL to take the Metro underground so that the burden of land acquisition and traffic mess can be eliminated, but the BMRCL rejected the proposal. When there is no solution in sight, there is still one hope left: Railways.

‘When road does not work, use railways’

Narayan and many like-minded people have come up with a plan to improve the situation. The plan is simple: Make use of existing, unused infrastructure. That is, make use of Railways.

The Train Users Group bound for Whitefield Area – Bangalore is a movement that is campaigning hard for more trains in the area. The group has even managed to rope in WEPPIA and are in talks with Whitefield Area Commerce and Industrial Association (WACIA), to garner more support.

Mainline Electric Multiple Unit (MEMU) train has been sanctioned between Ramanagaram and Bangalore City, and will start services from December 3rd 2014, according to Railway Minister Sadananda Gowda. The group is focusing now on the extension of this proposed new train from Ramanagara to Majestic till Whitefield.

The citizens’ group feels time is just ripe to push for this service. This is because, electrification has been completed on Ramanagaram and Majestic Railway line. Bangalore City – Whitefield line is already electrified, hence the entire stretch is electrified now. The group is also proposing many other simple improvements that can help divert good amount of traffic away from roads. 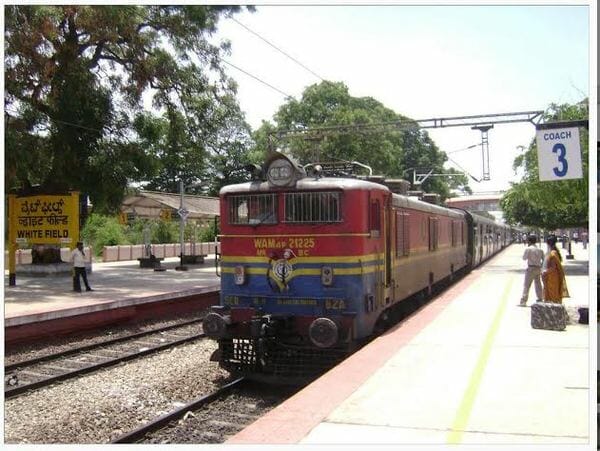 The group of citizens is also asking the Indian Railways to start new trains between Whitefield and other Railway stations of Bangalore, and align the timings of trains during peak hours so that the Ramanagaram to Whitefield belt is covered. A letter to Railways by the group requests to:

The letter also explains the logic behind the demand:

“Each commuter spends average 4 – 5 hours a day on commute to office and back which is a significant loss in productivity and cost. We believe that the train travel will reduce this travel time significantly with greater predictability… The requested train travel will give us some respite from longer journey times.

From the data sheet in the table below – we are quite convinced that providing few MEMU trains between these sections during the peak hours (timings and windows to be determined by the Railways) will go a long way to ease the traffic situation in the Whitefield area during office-going area and potentially entire Bangalore East.”

“We understand that apart from IT folks, teachers, government employees, and different laborers like textile industry and others are the bulk of the train users. From very conservative guestimates there are lakhs of people using various modes of transport across this belt.”

The table prepared by the group, with data collected from multiple sources, estimates that there are 5,000 buses that ply in the area that ferry over 1 lakh people. The Metro road-widening and construction work has the capacity to jeopardise the life of all these people.

Already thousands of employees are using the trains, though there are only two trains—one in the morning and another in the evening, from Prestige Shantiniketan (SGWF) to Bangalore City (SBC). There are employees in EPIP zone who come from Kengeri daily catching the Chamundi express at Jnanabharathi and interchange at SBC to catch the MEMU train to Shantiniketan (SGWF).

Sanjeev Dyamannavar, a commuter rail advocate who is supporting the initiative, says that the residents of Whitefield have not understood how suburban railways can benefit them. He puts forward four benefits for Whitefield residents:

Sanjeev Dyamannavar suggests that the ad hoc station behind Prestige Shantiniketan can be improved, by providing a functional platform and a foot over-bridge. This station is already being used by many passengers, who travel into the ITPL area from here through shared autos or other local transport. There are some basic facilities already in place, and the entire station can cost around Rs 1 crore. This will benefit everybody and attract more passengers towards trains.

“He introduced us to Deputy Regional Manager, Railway. The Minister was positive and we are hopeful. He has advised the officials to look at the proposal and come out with a viable plan”, says Narayanan. It remains to be seen whether the Railways, BBMP and BMRCL will heed to the requests of the people.

Editor: The post has been edited to remove incorrect statements.

They started at Lalbagh at 7 PM and looped through the city to reach Forum Mall at 8 PM. On 27th November, cyclists asserted their rightful place on Bangalore roads.

Metro travel restricted on account of COVID-19, water quality in 129 houses tested, fresh clearances needed for Peripheral Ring Road project – catch up on news from the city over the past week, in our roundup.

Is integration without displacement possible at Cantonment metro station?

A residents’ group in Benson Town is fearing displacement, as Metro surveys land to change the alignment again. BMRC has not explored options to avoid displacement in the original alignment.