A new government rule on housing allotment criteria envisages reserving some flats in apartments for low-income families. This means, a well-to-do family could well have a really poor family as their immediate neighbours. According to the new regulation introduced by the State government, 15 per cent of the total space in posh apartments and villas is to be reserved for the urban poor. For example, if a builder has built an apartment with 2,000 flats, 300 flats in them should be meant for the poor.

At least this is the spirit of the law. In reality, it may not happen.

The regulation for earmarking certain percentage of land and area for Economically Weaker Section (EWS) and Low Income Groups (LIG) in all local planning areas, introduced with effect from January 30th 2015, is full of ambiguity. The regulation has been loosely framed and could make it easy for the builders to manipulate it. It does not clearly explain the process through which the rule of reservation and selection of economically weaker section is to be implemented. 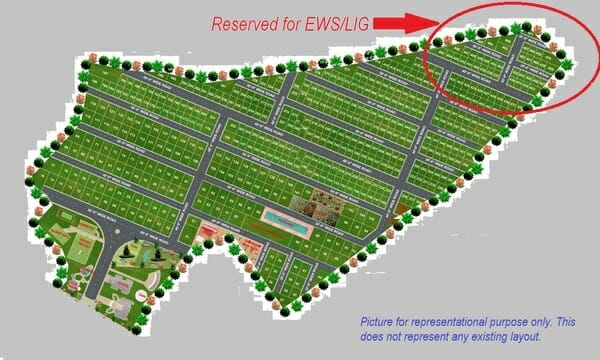 If the spirit of the rule is to be followed, the layout plans for mega projects will look like this picture. But in reality this may not happen.

Why did the government bring this rule?

The regulation has been introduced as a part of the Jawaharlal Nehru National Urban Renewal Mission (JNNURM) which aims to provide affordable housing to the urban poor. Reserving 15% in every housing project to urban poor is compulsory, if the state wants to get JNNURM funding fully.

Though a draft notification of the regulation was published in 2011, the final notification has been published after a long gap of four years. In fact, the State government in its last budget had assured of reserving 15 per cent in all housing projects for the poor. But, the the way the regulation is drafted raises doubts over whether the promise will be truly implemented in letter and spirit.

The JNNURM guidelines make it mandatory for all the state governments to bring in a policy that ensures earmarking at least 20 – 25 per cent of developed land in all housing projects (both public and private agencies) for EWS / LIG category with a system of cross subsidisation. The housing reform is to be done through appropriate legal stipulations and special initiatives. In the long term, availability of affordable land /housing will reduce squatting by poor on public lands and create slum-free cities, state the JNNURM guidelines.

The regulation comprises of two aspects:

The regulation has an important aspect. It states that “the area so reserved for EWS and LIG is exempted from computation of Floor Area Ratio (FAR) as an incentive to developer.” Which simply means, the builder / developer will be able to construct more flats than what is allowed, with the additional FAR equivalent to the area he has reserved for housing to poor.

Many unanswered questions in the rule

The regulation, if implemented in the current form, is most likely to fail in its objective of providing housing to the poor. It has been framed in such a way that it would not be difficult at all for the builder to manipulate it.

For instance, a builder may project three small flats in an apartment as reserved for EWS and show the same in the building plan to obtain essential licenses. Later, the builder may conspire to sell three flats to the members of a same family, who in turn may amalgamate it into one flat. It may also end up in the beneficiary selling the house to third person for a much higher rate.

Since the regulation does not explain about the subsidised rate for which the area / house has to be sold, the builder may reap benefit out of it, by selling the flat at an exorbitant rate. This is just a scenario that can happen.

According to highly-placed sources in the Urban Development department, the government has made the regulation and issued notification in a hurry with a sole intention to receive pending grant from the Central government under JNNURM. JNNURM guidelines make it mandatory for every State to implement the affordable housing scheme for poor, to release the entire grant. Otherwise 10% of the entire grant is withheld by the Central government.

How beneficiaries are selected in existing schemes

Beneficiaries for the existing housing schemes for poor are selected by taluk level Ashraya Samiti. Samiti will be headed by the respective MLA of the constituency, with the city municipal commissioner or executive officer of the taluk panchayat appointed as the member secretary. Further, the Samiti comprises of four members who are nominated by the government (unofficially hand-picked by the district-in-charge minister).

This system too has been proved futile, as there have been several instances of fake beneficiaries getting the houses sanctioned by using political influence or by producing fake income certificate, while the real beneficiaries are kept in dark.

No clarity on how to implement the rule

Bengaluru Development Authority’s Town Planning Officer Chowdegowda explained Citizen Matters that the BDA has already begun implementing the regulations. “We approve layout or building development within BDA limits only if the builders show the layout / building plan with certain area earmarked for EWS / LIG.” However, he agreed that his department does not look into the implementation part. “They are private builders and it is upto them to select the housing beneficiaries of their choice,” Chowdegowda said.

BDA Town and Country Planning Director S B Honnur too did not clarify on how the government will monitor effective implementation of the programme. “Houses will be given to poor for a nominal rate. The government has not yet chalked out guidelines for the selection of beneficiaries. Guidelines can be included in future,” he said.

In fact, Urban Development Minister Vinay Kumar Sorake has reportedly said that the Department will frame separate rules for the implementation of the EWS regulation. But, the regulation has been made by amending the zonal regulations under Section 13E of the Karnataka Town and Country Planning Act, 1961. The government can not introduce a separate rule and, further changes / additions or deletions could be made only by following the same procedure, that is by amending the zonal regulations.

Citizen Matters e-mailed the CEO of Confederation of Real Estate Developers’ Associations of India (CREDAI) Bengaluru Chapter seeking his response on the regulation, but did not get a response.

Affordable housing policies in other States

States like Rajasthan and Gujarat have introduced a comprehensive affordable housing policy years ago. Affordable housing policy of Rajasthan comprises of five models including a model where the private builders are supposed to reserve 15 per cent of their housing project for EWS and LIG. The policy makes it clear that the builder / developer has to hand over developed plots or houses to the nodal agency, thus avoiding any scope for manipulation. The price of the flat or house to the deserving applicants too is pre-determined so as to avoid any ambiguity.

Affordable housing policy of Gujarat, makes it mandatory for the scrutiny of the beneficiary applications received by the developer, by an implementing agency or appropriate prescribed agency. It also does not allow the beneficiary to sell the house or sublet it for at least seven years.

However, the Karnataka government seems to have not put any effort to take cue from other states in framing the regulation. Even in the affordable housing schemes that BDA is floating, such as BDA flats, there is no condition on subletting or selling, which has turned the BDA flat scheme into a real estate scheme, where people buy flats for 5 lakhs and sell it for 20 lakhs.

Read the full regulation below:

Remembering Xerxes Desai and his passion for urban issues

While Xerxes Desai was well known for his work at Titan and Tata companies, there was another side to him – his passion for urban issues in India.

Be a Citizen Scientist: Contribute to ‘Decoding Everyday’

City planning and design can be improved through a collaborative approach by crowdsourcing citizens perspectives and engaging them.