Tirupathi, located on the foot hills of Eastern Ghats, is in Andhra Pradesh State. It is the most popular pilgrimage centre in South India. About 20 million devotees visit Tirupathi in a year ie; about 37,500 pilgrims per day, out of which about 15,000 ie; about 30% are from Bengaluru side. The number of pilgrims was about 23 lakh during May 2015. But how well-connected is Tirupathi from Bengaluru? Is there a provision for improvisation?

Existing train connectivity is not convenient. It is a circuitous route. The number of passenger trains between  Mysore-Bengaloru-Tirupathi is 28 per day i.e. 14 trains from Yeshwanthpur and 14 from Bangalore City Station.

The route is as follows:

There is a direct flight from Bengaluru to Tirupathi. But the problem is the long distance of the Kempe Gowda International Airport from the City. The journey time to the Airport is one and a half to two hours each way.

The study is to examine whether it is possible to propose a direct railway link from Bangarpet to Chittoor  to reduce the heavy road traffic between Bengaluru to Chittoor. The route suggested is to avoid the round about railway route from Bangarpet to Pakala via Jolarpet and Katpadi. This route is only about  215 km as against the present distance of 286 km.

The proposed route is as follows: 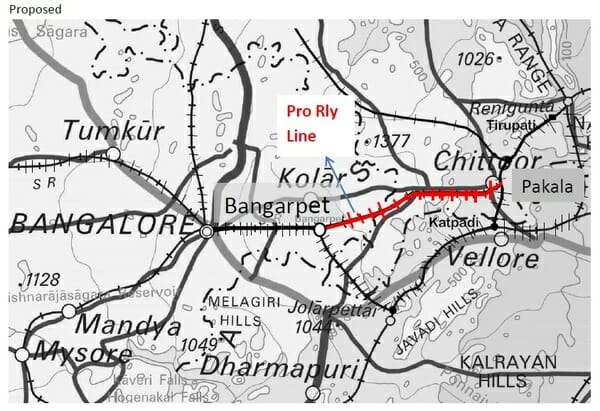 The distance reduced is about 71 km. A new line 120 km long is to be formed for direct link from  Bangarpet to Pakala. The journey time will be about 4 hours 20 minutes as against 6 hours 10 minutes. It is possible to reduce the journey time by one hour 50 minutes or about 2 hours which attract pilgrims to use the railway mode instead of the tedious and risky road journey. Fast and convenient trains with short frequency may have to be organised. It is possible to attract 50% of the road users who travel by road at present.

Merits of this proposal

The suggestions are based on cadastral maps showing the existing physical features, and railway map. The alignment proposed may be suitably modified according to standards and techniques.

Feasibility report may be prepared by the Railway engineers. The project may be implemented as a railway project or on BOOT basis, if permissible, according to policies of the Railways.

GoK pushing SW Railway for local trains within Bengaluru
Trains for daily commute in and around Bengaluru!
Outbound trains from Bengaluru packed to no end

About A.S. Kodanda Pani 2 Articles
The author has not yet added any personal or biographical info to her or his author profile.

Of rescue, adoption and taking care of animals

Working closely with animals in need is extremely rewarding. Every rescue and every adoption is an achievement for an animal rescuer. A typical day in the life of an animal rescuer, decoded.

Is this what they mean by Public-Private Partnerships?