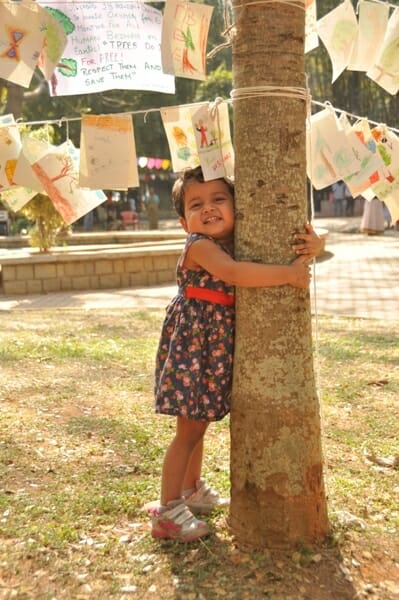 NERALU, the crowd-funded 2-day Urban Tree Festival concluded at Cubbon Park on Sunday, the 9th of February 2014. Citizens of all ages participated enthusiastically in tree walks, and appreciated the specially curated movies and the display of Rumale Chennabasavaiah’s paintings of Bengaluru’s trees. Visitors listened to a range of talks by noted naturalists, ornithologists, and Urban Ecology experts.

Children learnt about trees and their importance through a range of experiential activities such as fun tree walks, animated storytelling sessions, tree journaling and sketching workshops, and games.

Rohini Nilekani, noted philanthropist and founder chairperson of Arghyam and Pratham Books,  visited NERALU and commended the initiative. She said, “NERALU is such a creative concept yet so simple to scale. Bangalore’s trees have kept its climate cool and we need to bring back its green cover. NERALU is a great way to remember the importance of trees and a great way to realize how easy it is for all of us to bring more trees back to Bengaluru.”

Both days had screenings of documentaries and short films from the Films Division, such as “Tree of Unity”, “Taking Root – Vision of Wangari Maathai”,  “Saalu Marada Thimmakka”, and “Kaikondrahalli Lake – The Uncommon Story of an Urban Commons”.

Dr. S Subramanya, Professor of Entomology at University of Agricultural Sciences, Gandhi Krishi Vidya Kendra, who seeded the idea of NERALU and helped shape the festival, said, “NERALU is an amazing initiative. I would like to see it happening every year with an even greater spread of activities and experiences through the city.”

Speaking about the festival, Karthikeyan S, noted ecologist, ornithologist and Chief Naturalist of Jungle Lodges and Resorts, who also delivered a talk during NERALU said, “Trees form an important and irreplaceable component of cities. For many organisms, they constitute a habitat where they make a living, find food, build nests etc.  They help bring in a sense of balance in our rapidly urbanizing habitat. The NERALU Tree Festival was an excellent way to draw people out and admire and learn of the trees and our urban natural heritage.”

Other highlights of the Tree Festival included a pulsating song and dance performance by the Soliga Pusumaale Kalasangha, a tribal performing group from Biligiri Rangana Betta, and folk song renditions by the Bhoomithayi Balaga.

City theatre: Taking a bow or bowing out?

A cursory glance at the theatre scene in Bangalore shows that Kannada, English and the occasional translated play are being staged…but the vibrancy seems to be missing.