I was heading down M G Road in Bengaluru and just as I approached Anil Kumble Circle, I immediately looked back to see how much this one road had changed since this picture was taken from the same spot many years ago: 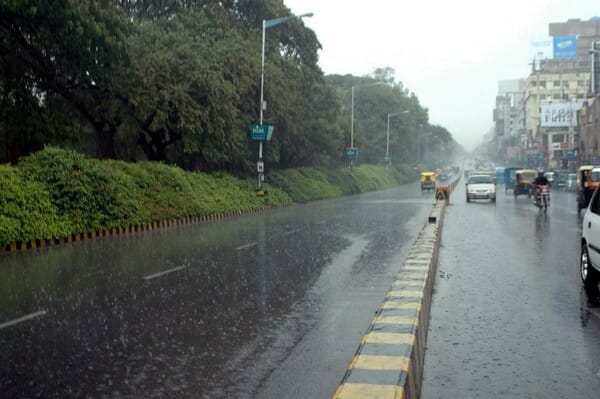 The obvious difference is the exhaustive removal of the colour green from the scene; the entire tree-lined walkway on the left has now given way to a boulevard. I bade the crown jewel of this phenomenon, Namma Metro, goodbye as I turned into Cubban Park to head my destination for the day, Neralu, a citizen-organised Tree Festival.

The location was a quaint spot within Cubbon Park, right next to the Cubban Park Metro Station (an ironic little twist). The first day of activities at Neralu were primarily aimed at kids. After tree walks from multiple locations early in the morning, the kids all gathered at the end of their walks at the same spot to leave an imprint of their shadows, or ‘Neralu’, on a specially designed sheet of paper.

Later in the afternoon, you could spot groups of kids and parents walking around trying their hand at an app-based Tree Quiz. There was an impromptu street play in Kannada, and even though I understood very little, the obvious theme was that maybe citizens would care to conserve their trees if they emitted wifi, a seemingly essential tool for life today.

The kids were laughing while the old men who had perhaps accompanied their grandchildren or maybe stopped by to look at this commotion while on their mid-day stroll, nodded in agreement and occasionally clapped to a point made by the actors.

Following this, there was a story-telling session for the kids, which saw them actively participate in a story woven out of characters they recommended, and about the importance of conserving what’s around you, learning to share it with everyone else and for the sake of the future.

I also spoke to a volunteer, Raji Sunderkrishnan. Here’s what she had to say:

Day two of Neralu saw many lectures and workshops held at the National Gallery of Modern Art, Bengaluru. I attended Dr Harini Nagendra’s talk on the Past, Present, and Future of Trees in Bengaluru. Her presentation left many people nostalgic and well learned as she covered the history of trees in Bengaluru from the 6-7 centuries. She also pointed out how 75% of the population will live in urban areas by the year 2050, and how it will become imperative for cities like Bengaluru to become role models of ecological and sustainable growth.

Overall, Neralu demonstrated to me how two generations of people in Bengaluru, parents and their kids, have been nurtured by experience and by the initiative of motivated citizens to simply care more about their surroundings and how they interact with it. Hopefully this will lead to an entire generation of ecologically aware citizenry that will help us out of the mess we find ourselves in.

Down memory lane to school days and environment education

The sheer number of enthusiastic kids around me left me pondering about how I used to think about the environment when I was their age. The ICSE curriculum used to have a subject called Environment Education that was mandatory for everyone. I cannot remember a subject that was universally hated by my entire batch as this one.

For some reason, learning about pollution, waste management and ecological conservation was the least of our worries as we approached adulthood in what we perceived then was a simple, green Bengaluru. Little did we know what was coming. I know that every time I have met any of my batchmates in the past couple of years, we have all had the very same conversations about the intolerable traffic, lack of basic civic infrastructure as well as the occasional burning lake. Most of us have seething criticism of the local government as well as strong ideas of how development should happen to support the incredible rate of urbanisation the city is going through. To think that now how we all care about our trees and want the lakes next to us clean and usable for daily strolls!

About Abraham Koshy 3 Articles
Abraham Koshy is an undergraduate student at the University of Illinois and is interning with Citizen Matters.

We often remark ‘how could she do that!’ on the other mothers’ parenting methods. But perhaps there is a very good reason behind that.

Voices from Bengaluru’s one and only tree festival

NERALU, meaning shade in Kannada is used to describe the Annual Tree festival in Bengaluru.