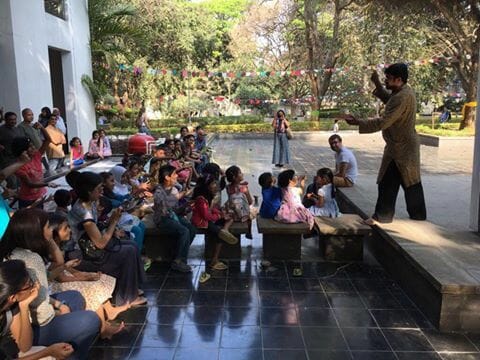 Save the Tree – Street Play ‘Kallada’

A theatre troupe based out of Bengaluru put on a Street Play on Day 1 of Neralu. The play was in Kannada, and spoke about motivating people to be concerned about the preservation of trees around them by humorously painting trees as an entity capable of producing wi-fi – maybe only then people will take the initiative to preserve trees.

As part of activities for Day 1 of Neralu, storyteller Vikram Sridhar regaled children with a story about how to protect our animals. It was a hot afternoon as the children who had come to Neralu gathered around Vikram to listen to him under the shade of a large tree. He had the kids cackling in laughter and also involved them in creating the story he was telling. Overall, a fun afternoon for the kids.

Raji Sunderkrishnan is a volunteer with Neralu, and she’s been a part of the festival since its inception three years ago. She talks about the beginnings of the festival, with a humble presence at Cubban Park and expanding to the National Gallery of Modern Art over the next two editions. She also explains why this festival exists – to spread awareness about trees and their importance to the city of Bengaluru.

Poornima Kannan, a organising volunteer with Neralu, talks about the motivations behind Neralu. She explains why it’s important to engage citizens to be motivated about the trees around them, explain the history and culture behind some of the oldest trees, and also some of the biodiversity that it supports. She also talks about why children are an important audience for this festival.

Dr. Prachi Jariwala started learning Indian classical dance at a tender age. She started with Bharatanatyam, and later Odissi, in which she found her true calling. She’s an empaneled artist at the Indian Council for Cultural Relations, and has performed in India and around the world. Over the last few years, she has worked with children, teaching them to be performers – storytelling through dance. Her musical presentation at Neralu was titled, ‘The Monkey King.’

S R Neginhal, the pioneer of urban forestry who was tasked with greening Bengaluru once and did it successfully, talks about Bengaluru’s green cover and the way forward.

In this episode of Active Bangalore, RJ Beula talks to Sridhar Venkat, CEO of Akshaya Patra Foundation, while RJ Padma Priya interacts with some of the children who enjoy the mid-day meals provided by the

Traffic planning, road widening and mass tree felling is all the rage in Bangalore nowadays. City officials have paid scant respect to environmental activist groups who have protested the destruction of the inner city’s green