Namma Bengaluru Foundation and the Bengaluru Residents Associations Confederation Ensemble (BRACE) congratulates all the corporators elected to the BBMP. Bengalureans have reposed immense faith in corporators across party lines to reshape the future of our city. Bengaluru is already one of the fastest growing metropolises in India, and will become one of the largest and most populous cities by 2025. Scams, financial irregularities, corruption, bankruptcy etc have plagued BBMP in the last five years. Despite this, Bengalureans came out to elect their corporators. This is a testimony to Bengalureans unwavering faith in the political process, and an opportunity for the newly elected corporators to restore the citizen’s eroded faith in BBMP.

In a commendable initiative, 85 candidates to the BBMP Election, 2015 had signed the Namma Bengaluru Foundation and BRACE’s Ideal Corporator pledge to provide citizen centric governance, and abide by high standards of personal and institutional integrity. 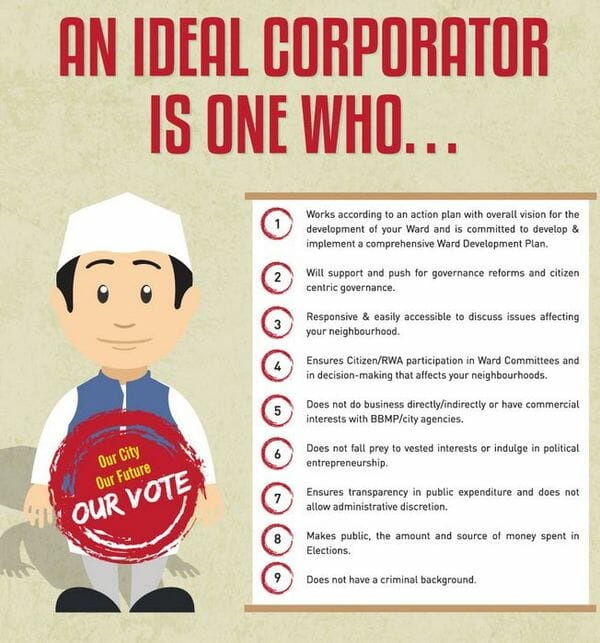 7 candidates who signed the pledge have won the election. Namma Bengaluru Foundation congratulates and extends its full support to these candidates to abide by the Ideal Corporator Pledge. We urge all corporators to constitute a Ward Committee at the earliest, and ensure adequate representation of citizens in the ward.

Candidates who have signed the Ideal Corporator pledge

Over the next five years, NBF will bring out a half yearly report on the performance of these corporators on the basis of their commitment made during the elections. Some of the parameters on the basis of which the candidates will be evaluated are as follows:

Conflict of Interest: Whether the corporator/close family member/associates have entered into agreement/contract with BBMP which are directly in conflict with their duty as a corporator?

Whether any Criminal cases have been lodged against the corporator: If yes, details of the charge framed and the status of the case.

The quality of governance and provision of public services will largely determine whether Bengaluru will become a truly world class city or decay into an urban sprawl. Can our city provide basic amenities to all including the millions migrating into the city? Will our city become conducive to job creation to keep pace with the rapidly expanding population? Will Bengaluru be able to capitalise on its technological innovations? These are some of the questions that need to be seriously deliberated upon and warrants a vision plan.

No meaningful change is possible without reforming governance at the grass root level. Corporators are at the very foundation of the urban local governance structure and wield the greatest power to bring meaningful changes at the ward level. We hope that the newly elected corporators work towards building a truly inclusive and prosperous city.

About Bharati Sekar 1 Article
The author has not yet added any personal or biographical info to her or his author profile.

Despite several alerts on the issue of problems created by poor quality software, voter rolls continue to have the same problems. Illegal deletions and modifications continue.