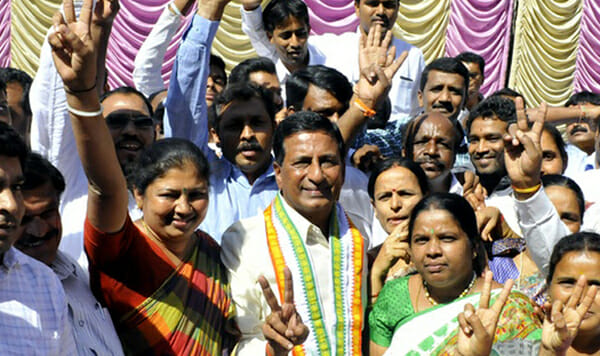 C Narayanaswamy, the Congress candidate from Bangalore North, seems to be a very busy man. Each time we called his number, we were told, ‘Sir is campaigning’ or ‘Sir is in a meeting’. We finally managed to catch up with him in a telephonic interview at 11 pm in the night. The 66-year-old candidate truly sounded tired at the end of a long day, his voice almost hoarse. Nevertheless, he patiently spent about 10 minutes talking to us about why he would make a good candidate and why good leaders are important for the society.

I have been in the public life for over 30 to 35 years. I was a member of Lok Sabha in this constituency earlier. And I am aware of the problems directly connected to the people of this constituency. I have a some experience in development administration. I have a clean record, I have been functioning honestly through my career- there has been no black dot in my political career.

Have you joined the Congress because of your closeness to Chief Minister Siddaramaiah?

No. I became an advocate in 1972 after completion of my LLB. I  entered politics in 1977. Till last August 2013, I was in Janata Dal (Secular). Basically I am opposed to communal elements. So when the JD(S) took a decision to align with BJP, I decided to quit the party. What I thought, I wanted to join a secular party, a secular national party and I decided to join the Congress.

How are you funding your campaigns? Your money, party funds or donations?

Some well-wishers have given money, I have put in a little bit of my own and party is also spending some money as well.

Do you think 70 lakhs is enough for an election campaign?

That depends on how you campaign.

And how are you campaigning? What are the various medium that you are using?

Campaigning because… starting from going to the parks in the morning everyday – meeting the people who come for walks, we’re going to the grounds, visiting the various assembly constituencies, meeting the electorate through our party workers.

Will the salary you get as an MP be sufficient for you to run your family, as well as discharge your duties as an MP? How will you manage?

We have our organic farming, we have our own factory. I have two sons who are working. We have some inherited property also, with me being the only child in the family. No problem.

If you are elected, what will you do to reduce corruption in the system?

I can conscientiously say that I have not touched any bribes so far in my life. I have maintained my integrity and honesty in public service. Most of the time, that habit percolates from the top. When the person above is corrupt, he will not have the moral strength to control the corrupt people who are below him. So… I will set an example by being honest. There will be a sort of moral fear in the subordinates seeing an office of responsibility.

What happens if you win, but your party does not come to power? Is it possible to bring about change sitting in opposition?

Yeah! It depends on how one conducts themselves as a public citizen… whether I win or lose… I am in touch with the people of all the political parties.

How will you maintain interaction with the voters once elected?

I have been with them all through the years. I have a website. I have been using it.

We did have a couple more questions for him, which he declined to answer over the phone. Understandably, it had been a long day for him. He did ask us to mail him the questions, stating that he would respond to them over mail. We will post his reponse once we hear from him.

Everytime a building collapsed, I wrote to BBMP, says Limbavali

Volunteers from Million Voter Rising, the citizen group from Mahadevapura, interviewed candidates contesting in the Karnataka Assembly elections from Mahadevapura constituency. This is the transcript of the interview with the incumbent MLA from Bharatiya Janata Party,

South zone has 44 wards. BJP dominated the BBMP elections – 2010 in this zone, by capturing 27 wards. Here is the information related to the zone.