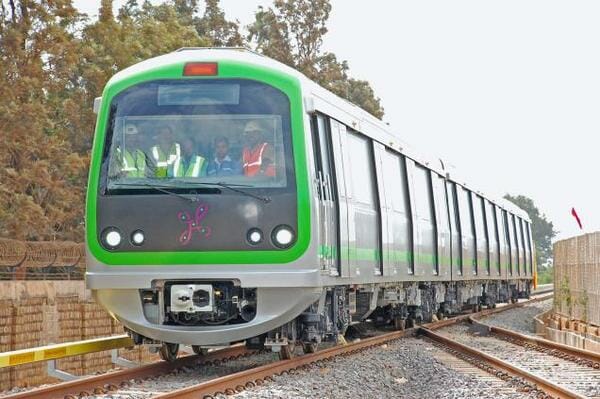 After repeated delays in meeting the original schedule, Bangalore Metro is set to extend its footprint in North Bengauru. However, the extension is a mere 2.5 kilometres on Reach 3 (B) – the Peenya Industry – Nagasandra stretch. The trial runs began on September 30, 2014, and the service is likely to be inaugurated in December 2014 or January 2015. The three new stations on this stretch are T Dasarahalli, Jalahalli and Nagasandra. The Nagasandra station is located at a distance of around 12.8 km from Mantri Square station.

Will Reach 3B of Metro make an impact?

This however, is unlikely to make any sort of impact on the existing mess, which exists on NH4 that goes towards Tumkur. The Metro Reach 3 and Reach 3A inaugurated on March 1, 2014 along with the elevated highway has not made any difference to the existing mess on this road. The traffic at various junctions such as Jalahalli, Goraguntepalya remain as chaotic as before and there is no reduction in traffic volumes so to speak of.

As per a report from Deccan Herald, the ridership on weekdays on this stretch is 15,000. This goes up to 20,000 on weekends. Bangalore Metro had estimated a ridership of 50,000 on this stretch. BMRCL opines that the ridership may go up by 5,000 after the extension. Last mile connectivity, lack of coordination between Metro and other transport agencies such as SWR (South Western Railways) and BMTC, Metro services for latenighters, bad design of stations (Peenya and Peenya Industrial Estate stations), incomplete civil works and disruptions are cited as some of the reasons for poor patronage.

Metro’s ridership has not reached the mark as a lot of issues have not been addressed. A major issue, which remains unaddressed even today in so far as Bangalore Metro is concerned, is last mile connectivity.

People who have travelled on the Delhi metro would acquiesce that the stations at DMRC are much better-equipped and designed. For starters, most metro stations in New Delhi have parking lots, which means the issue of connectivity till doorstep is assured.

BMRCL has parking lots only at Swamy Vivekananda and Byappanhalli stations currently, but nowhere on Reach 3A-B. The other way by which, this issue could have been addressed is through better co-ordination with BMTC. 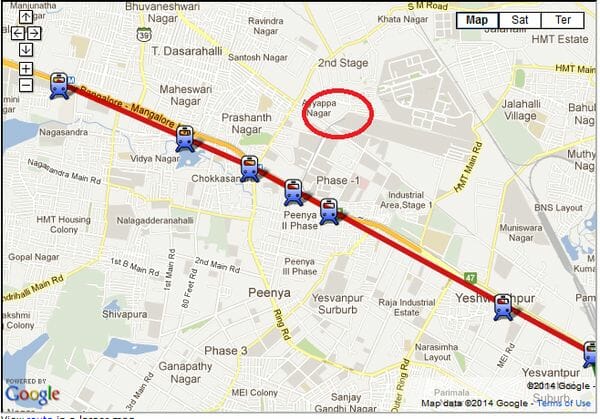 Route map of 3B. The red circle marks the KSRTC bus stand in Peenya, which is one km away from Metro station.

BMTC has withdrawn its feeder service from Mantri Mall to Majestic, which means many long distance commuters are inconvenienced. Passengers are left in the middle of nowhere as they alight at the Mantri Square station.

The situation is  similar at Peenya Industry Metro Station, as commuters get off  and try to reach their homes or workplaces off Tumkur road. There are no separate feeder services available here as well. The auto drivers of Bangalore are the biggest beneficiaries in a scenario like this.

Bhavin Gandhi, a resident of Rajajinagar and a frequent user of this service opines that withdrawal of feeder services to Majestic from Mantri has led to a fall in ridership. He says, “Commuters are forced to use regular services to Majestic instead of the metro feeder buses, which were available earlier. This is not only an expensive proposition but we are also forced to jostle with regular commuters on this crowded route.”

There seems to be an issue in connecting Peenya Metro station with the new Satellite Bus stand as well. BMTC, BMRCL and KSRTC need to come together and market their services so that people use KSRTC’s services to get to other towns in Karnataka. KSRTC’s idea of decongesting Majestic albeit a noble one has not succeeded as they did not coordinate with Metro and BMTC well enough. The result: private bus operators are making a killing.

Sanjeev Dyamannavar of Praja RAAG (A citizen’s Initiative for civic needs) has often stressed on the need on integrating Metro with Railways and BMTC. He says, “The new satellite bus stand is just a kilometre away from Peenya Metro station but BMRCL and BMTC have shown no desire to integrate bus and metro services.”

On the other hand,  Veeregowda G N, General Manager – traffic for BMTC, said that the feeder services were withdrawn after BMTC found that people were not using them. It is not clear whether they did it on the basis of any survey, was there enough publicity given to these buses, were public aware of it etc.

BMRCL may have accomplished a lot of firsts in Bangalore, however they need to get their act together as far as their co-ordination with civic agencies and other transport corporations are concerned.

As a recent press report in Udayavani pointed out, it is extremely difficult to cross the road as one gets off the train at Peenya and Peenya Industrial estate metro stations. The stations are located on one side of the road and there is no access to it from the other side. Given the huge volume of traffic that this road sees, crossing the road is a risky affair. The iron railings on the pavements and the huge dividers also make crossing the road a difficult task. People, therefore find it easier to use the bus than risk their lives trying to cross the road, if bus services are provided. Basics like exits and entrances to the Metro station on both sides of the roads should have been taken care of.

What needs to be done by Namma Metro

There needs to be separate Metro feeder service from all the Metro stations to all the residential and commercial neighbourhoods, which form the catchment areas for all these stations.

Right now, the situation is such that Metro commuters are forced to depend upon regular BMTC services or autos to reach their destination. Residents of localities such as Basaveshwarnagar, Gayatri Nagar, Nandini Layout, Gelayarabalaga, Kurubarahalli, Malleswaram, Rajajinagar (III, IV, V, and VI Blocks), Seshadripuram, interior parts of Mahalakshmi Layout etc. could benefit immensely if Metro feeder services are provided.

The much neglected industrial estate of Peenya will also benefit immensely if Metro feeder buses are provided. This needs to be taken into consideration and implemented at least once the North-South corridor is complete.

Metro to reach Sarjapur Road!
BBMP plans to merge Silk Board elevated road with Metro line
Can we have Metro to Whitefield upon the existing railway track?

Check who the candidates are from your area, what did they do, and who deserves your vote!

Late night public transport options in Bangalore are few. What are the impediments that BMTC faces in introducing adequate late night services? Read on!