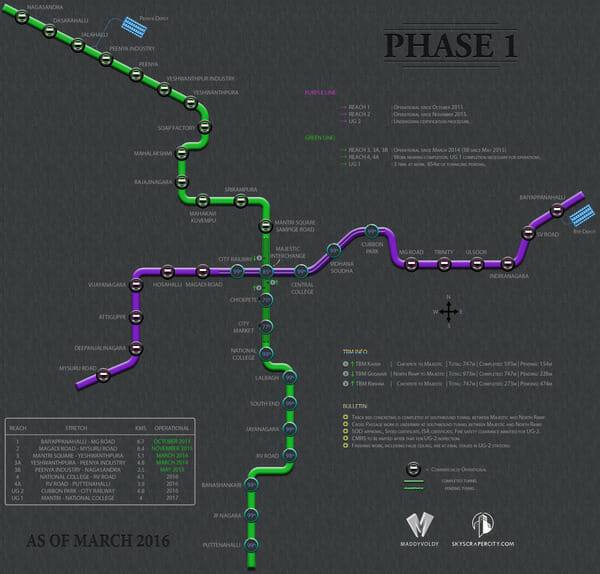 The million dollar question troubling thousands of commuters waiting for the completion of Metro lines: When will we be able to travel in Metro from one corner of Bengaluru to another?

Bangalore Metro Rail Corporation Limited (BMRCL) had earlier given the deadline of February for the inauguration. However, February came and went without seeing the real inauguration of the project, though the work has been happening slowly.

Once the tracks, stations, electrification and signalling systems for Metro are ready, there are many tests to be conducted, to ensure the safety and reliability of systems. Oscillation trial is one such important test. Trains tend to oscillate, or shake at high speeds, which could be violent and can damage track and wheels, and even cause derailment. This problem needs to be addressed in the track design, by adding a differential that accounts for this. There is a tolerance limit of oscillation for every track, and the oscillation should not cross that limit.
Oscillation trial checks whether the train is running precisely on the track and looks for any movement away from the track. It assesses how the train is swaying when it moves, and which speed is safer for the train to run. Railway Design and Standards Organisation (RDSO), Lucknow, conducts this for all Metro tracks in India. Process of passing this test can take maximum 10 days, in the absence of major glitches.After oscillation trials, emergency braking system, controllability and fire safety systems are tested, in order to check the response in emergency situations. After this, the certificates issued assure that the tracks are fit to host running trains. Metro applies for CMRS inspection post this. CMRS authorities conduct inspection and issue the required certificates and authorise Metro to open the corridor. Any non-completion of work, or any technical, engineering or unanticipated glitch in any stage of certification will need to be rectified, and this leads to delays.Procedure for certification of Metro trains is explained in this file. This flowchart shows the various stages involved and timeframes.

This line will enable people to travel from Mysore Road area to M G Road to Byappanahalli in Metro. With proper feeder buses, reaching different areas in Whitefield will be super easy. However it will take at least one more month to open the lines for the Metro train.

Though the work has almost been completed, a Times of India report said that the CMRS survey is yet to be commissioned. Pradeep Singh Kharola was quoted as saying “We’ve completed the oscillation trials which are the most crucial part of getting ready. The stations are complete and getting the final touches. We are waiting for a speed test certificate by the Railway Standard and Designs Operation (RDSO) in a week’s time, which is the first step to begin the process of seeking clearance, followed by a Schedule of Dimensions (SoD) and a few more certificates expected to be issued by the first week of March.” He added that these tests were needed to be done before the BMRCL approaches the Commissioner of Metro Rail Safety (CMRS) for the certification process.

Travel from Nayandahalli to Baiyappanahalli this April onwards

The East-West corridor or Purple Line as it is known in Metro lingo, covers a distance of 18.10 kms. In this, two reaches (Reach 1 and 1a, and Reach 2 and 2a) are already open, and cover MG Road to Baiyappanahalli and Magadi Road to Mysore Road.

There are four stations that are yet to be commissioned: Cubbon Park (Cricket stadium), Vidhana Soudha, Central College and Majestic.

According to the February newsletter released by Bangalore Metro Rail Corporation Limited (BMRCL), civil works for the Cubbon Park station have been completed. All entry-exit structures are completed except the one on North-West side. Architectural finishing works and final finishing works like false ceiling and painting are being done. Escalators from ground to lobby to platform level have been installed and commissioned. Lifts are installed. Track-linking for East and Westbound tracks has been completed. Oscillation trials have been conducted from East Ramp to West Ramp. 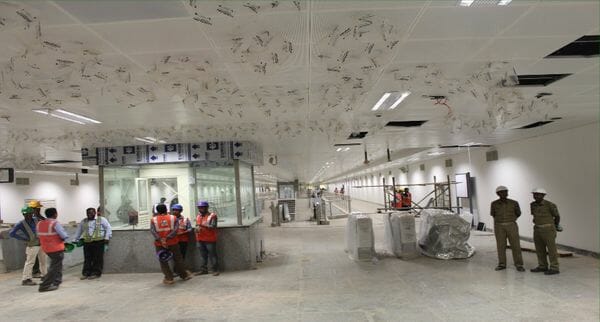 An inside view of Vidhana Soudha Metro station. Pic: BMRCL

Next station is Vidhana Soudha Station. Here civil works have been completed. Architectural finishing works are almost complete, and finishing works like false ceiling and painting are being done. Road above the station has been restored and  is open to traffic. Escalators from concourse to Platform and Ground to concourse have been installed and commissioned. Lifts have been installed.

Sir M Visvesvaraya Station (Central College) is the next, where the civil work and entry-exit structures are completed. Escalators and lifts are installed and commissioned. Architectural finishing works and final finishing works are in final stage of completion.

Metro Newsletter says that fire safety inspection for Sir M Visvesvaraya Station (Central College) station is pending, while all other stations have undergone the inspection. Upon getting fire clearance, BMRCL will invite the Commissioner or Metro Rail Safety to conduct the final inspection and initiate final certification process.

Realistically, this stretch of Metro can be fully operational in April, or maximum May 2016.

This is also called Green Line, and covers a distance of 24.20 kms. The North leg (Reach 3, 3a, 3b) of the project is open connecting the Sampige Road (Swastik) to Peenya Industry and Nagasandra.

There are three tunnel boring machines (TBMs) working underground to complete the north-south line. Underground tracks are not laid in one tunnel but there will be two tunnels for to-and-fro movement.

One tunnel coming from Majestic to Swastik Metro station, coming out near Krishna Floor Mill, having a distance of 955 metres, got completed in November 2015 with the help of Margarita Tunnel Boring Machine.

According to a BMRCL newsletter released on March 8, Godavari Tunnel Boring Machine tunnelling the North tunnel between North Ramp (Krishna Floor Mill) and Majestic Station completed 747 metres in February, with 226 metres remaining out of 973 metres. In January, Godavari completed a distance of 687 metres. the progress for February being 60 metres. 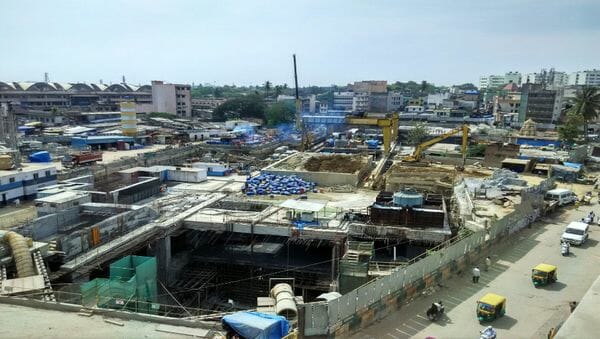 Another pending underground stretch is between Chickpet to Majestic. Krishna TBM boring the northbound tunnel between Chickpet (South ramp) and Majestic stations completed 273 metres, while 474 metres were remaining out of 747 metres, as on March 8, 2016.  In January, Krishna had completed 78 metres according to the newsletter published in February. Total progress was 195 metres in February 2016.

Kaveri Tunnel Boring Machine tunnelling the southbound tunnel between Chickpet and Majestic Station completed 593 metres, with a balance of 154 metres out of 747 metres. Completion of this tunnel is crucial for Metro to start the oscillation trials and other tests in the Metro stretch between National College and Puttenahalli. Kaveri completed 575 metres in January, thus the progress in February is just 18 metres. 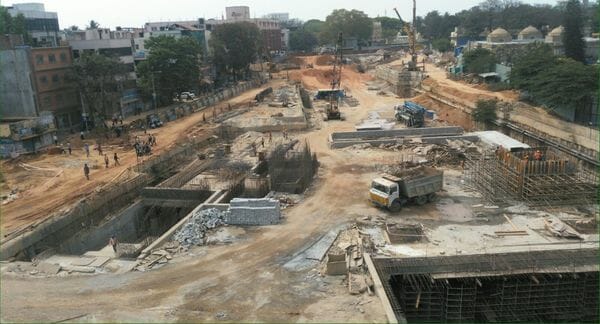 Why is the North-South stretch being delayed?

Right now the BMRCL is unable to commission the compulsory tests on the south leg of the North-South corridor connecting KR Market and Puttenahalli. The trains on this stretch need to have a depot where they can be serviced regularly, which is impossible now because there is no track yet to connect the trains to the south leg and the depots. As of now there are two depots, one at Peenya and another at Baiyappanahalli.

Tunnel boring work takes a lot of time, as Bengaluru sits on a rock, and the tunnels will go up to 22 metres beneath the ground. In the Majestic intersection, the East-West line will be on the top layer 8-9 metres below the ground level, while the North-South one will be at a lower level, at 21.14 metres according to the DPR of Phase-I of Namma Metro. In reality the the lower level goes upto 22-23 meters.

In a press interaction that took place on March 15, 2016, Pradeep Singh Kharola, Managing Director of BMRCL, said that the BMRCL aims to start commercial operations from Sampige Road to Majestic interchange by June-July 2016, thus completing the northern reach of the Metro, which will enable travel from Nagasandra to Mysore Road and Baiyapanahalli.

On March 15, work was on in war footing in level 1 (East-West line) on Majestic interchange. The North-South line that passes through the lower level in the interchange has been isolated from level 1 to enable smooth work on the East-West station.

Kharola added that by August 2016, the BMRCL wants to open Puttenahalli to National College line. By December commercial operations of North-South Metro will start. Thus the new deadline for north-south corridor, and Phase-I, set by BMRCL is December 2016 before which BMRCL wants to complete all the works and commission trains.

Tangled in litigation, Metro work slows
KIADB starts land acquisition for Metro Phase – II
Can we have Metro to Whitefield upon the existing railway track?
What is so ‘top secret’ about Metro stations?

High Court directs CCTV camera installation around all lakes, another flyover proposed in Outer Ring Road, BMTC to open the first 50 counters to issue student bus passes – read more on what happened in Bengaluru this week

From Karnataka government’s money allocation for Bengaluru, to BMTC’s killing of pedestrians and bikers, all important news that you need to know form last week, in one place.