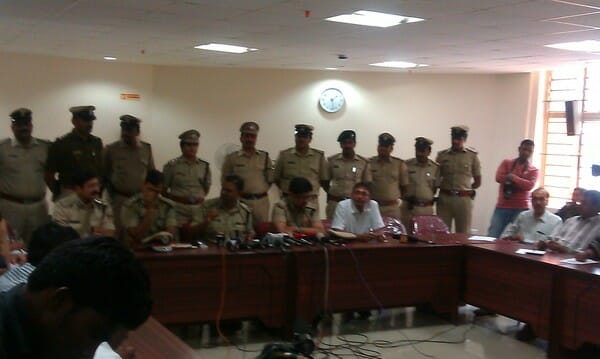 Police team in the press conference where the arrest of two people was announced. Pic: Nikita Malusare

Bengaluru police nabbed two more people in relation to Vibgyor High School Marathahalli incident. Bangalore Police Commissioner, M N Reddi informed in a press conference held on July 29, 2014, that gym instructors Waseem Pasha (28) and Lalgiri (21) have been arrested on the basis of investigation and CCTV footage. They also claimed that the incident took place on July 3, 2014, contrary to the complaint filed by the parents of the abused child in Varthur police station that puts the date as July 2, 2014.

Reddi said in the press conference that “based on confessional statements, evidence etc,” two others have been arrested. He claimed that Waseem Pasha has confessed to committing the crime.

Lalgiri is a Gymnastics teacher in Vibgyor High school for the past two years, while Waseem Pasha is working as a gymnastic teacher for three years. Both of them have been arrested under section 376 D of the Indian Penal Code and section 4 and 6 of the Protection of Children from Sexual Offences (POCSO) Act. The case is being treated as gang rape.

The police officials explained that the CCTV cameras are located only in the corridors and not in the room. However, there have been footages of the accused walking into the room but their faces are not clearly visible on the footage.

Fresh case slapped, no clean chit to Mustafa yet

Police clarified that there was no direct involvement of the first accused arrested in the case, Mohammad Mustafa, though their initial suspicion was on him. The arrest of Mustafa, the skating instructor who had coached hundreds of children in Whitefield area had most residents stunned. Mustafa was popular in the area and famous for his strict coaching and mannerisms.

However, despite the arrests of the two new suspects, police have not given a clean chit to Mustafa yet. Reddi said, “We have to explore whether there is any indirect role of Mustafa.” Reddi confirmed that Mustafa was not there in the room at the time of the incident. He added that there is a complaint on him in relation to his conduct in the school in which Mustafa was working as an instructor in 2011.

The Hindu reported that the complaint was filed by the police suo motu, while the school stuck to its stand of not having the need to complain.

The delay in investigation was because, Reddi said, “You need to understand that the child is not been able to articulate the situation clearly like an adult. We have been doing our investigation on the basis of complaints lodged by the child’s parents.” The police also hinted at a slight variation in the time and place of the incident, which might be different from what the child said.

Reddi said that if any evidence or information brings up any other suspect, the action will be taken accordingly.

Reddi on Rustum Kerawalla: Section rightly changed from 201 to 202’

When the charges were filed on Rustum Kerewalla, the section 201 announced by M N Reddi which could have been non-bailable was changed to 202. This was seen as an act of trying to save the school owner.

When Citizen Matters asked how the section under which Rustum Kerewalla, head of Vibgyor school, was charged, was changed to 202 from 201, Reddi clarified that he had spoken in a generic way that he has been arrested for destroying evidences. “Our investigating officer Assistant Commissioner of Police, Duggal of HAL Police Station knows the case in detail. According to him the evidences were not destroyed, but omitted, hence the sections were changed.”

No lawyer for Mustafa yet

It was July 16. Some police officers knocked the door of Mustafa and took away two laptops from him, according to eyewitnesses.

The very next day, police came back and asked Mustafa to accompany them. He had just come back from his class, and left house with them in his sports dress. Unaware of what awaited him, Mustafa accompanied police to the police station. “He got arrested outside the house,” said Mustafa’s father, Murtaza.

Murtaza is yet to appoint a lawyer for Mustafa. “How can I appoint a lawyer? It needs a lot of money and we don’t have so much money to invest. The only earning  person of the family, Mustafa is now behind the bar. Where will I get money from?” Unable to speak further, he hung up the phone.

Now Murtaza is a bit relieved. “Mera beta bekasoor hai,” he says now, while he waits for his son to come back.

‘We are scared of getting arrested’

Mustafa’s house is not very far from the Varthur police station, it just takes five minutes walk to reach his house. He lives in a rented house on a two-storey apartment owned by Gouse Mohammad Khan. Khan has a joint family with four daughters and three elderly women living in a house below Mustafa’s house.

Khan is in complete disbelief of Mustafa’s guilt. Mustafa stays on the first floor above Khan’s house. “He has a beautiful wife and a girl child. If he had to do something, he could have done to them also.” Khan vouches for well-mannered behaviour of Mustafa.

Police did not inform the parents why their son was taken away. Khan is a friend of his father who knows the family for last seven years. He hasn’t made any attempts to visit Mustafa who is in jail. He said, “If we try to enquire about this, then the police might put us in jail too, just like the way they did to Mustafa’s friend.”

It turns out that Waseem Pasha who was arrested by the police on Monday was in police custody earlier too. Khan says that Mustafa’s friend, Waseem, a physical education instructor at the Vibgyor school, was noted by police when he carried food for Mustafa who was in jail. “After Waseem took food for Mustafa for two consecutive days, the police asked who he was. When he informed them that he is a friend and colleague from the same Vibgyor High school, he was arrested.” Gouse Khan confirmed that it was the same Waseem who was arrested as the prime suspect.

Gouse Khan said he did not know Wasim Pasha personally. When enquired about this with the Varthur police station officials, they asked us to enquire with the HAL police station as the case is under HAL ACP. DCP South-east, T D Pawar rejected the claims of Wasim’s arrest. This was on July 26, 2014.

Khan says that he will not push Mustafa out of the house if he is not guilty. Mustafa’s house was closed. Khan said that his entire family went to his relative’s place and has planned to seek legal help.

A parent who did not want to be named told Citizen Matters: “No skating teacher can make the students learn without touching hands. He was very strict as a teacher. I can tell you he was one of the angry-young-man types. But that doesn’t make him an accused.”

Will the kid ever get justice?

The aggrieved child’s parent has questioned the investigation procedures that have let the school authorities scot-free. In an interview to Bangalore Mirror, he was quoted as saying: “My daughter may not be in a clear state of mind to identify the culprits, but from day one she has been saying that two people had sexually abused her… She has all along maintained that a doctor came to school and gave her an injection and some medicine.”

Suspecting that the incident of giving the injection happened on July 8, he said the school authorities are supposed to inform the parents before any medical treatment is administered to any student. They should inform atleast after the event, in case of an emergency, they should at least inform parents after the treatment is given. The diary of the kid usually has all the detials related to the kid, but in this case the school authorities kept mum. “The school authorities neither called us, nor did they mention it in the diary. Why hide the truth about the medical treatment given to her?” he questioned, as quoted by Bangalore Mirror.

A new beginning was made in HSR Layout, with children and parents along with teachers in a school campaigning for walking and cycling routes to the school.

4-year-old Nawaz passed away from pneumonia. Afflicted with cerebral palsy, he was also severely malnourished. The responsibility for his death could very well fall on the hospital that refused to treat him.

What you can do to ensure excellent education for all

What can guarantee affordable, yet quality education for all? A citizen is looking to implement some key measures across ten low-cost private schools in Bangalore.