We stood around quietly, my brother and me, as Amma and Maami negotiated with the guys in the shop. The shop had bales and bales of cotton strewn all over the 10ftx10ft area, and housed three or four guys, in various stages of labour. After much bargaining from our side and patronising from theirs, we took home a pillow. It was grey with golden-yellow lines crisscrossing each other at right angles and turning black where they met. That night, my brother and I fought for rights to use the new pillow. 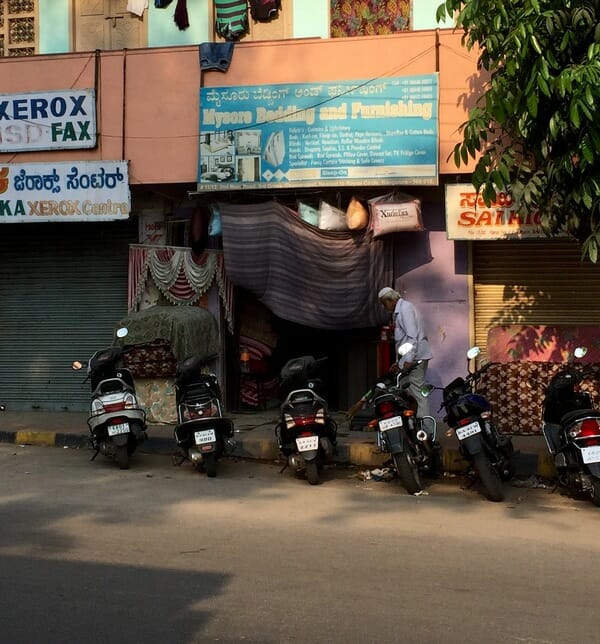 The place, Mysore Bedding House, was nestled on 3rd Cross, next to the conservancy lane between 1st and 2nd Main Roads, of Chamarajpet. It required visits at times when the cotton pillows and beds ended up with the cotton moving away from where the body rested, and needed to be spread even. We’d watch with fascination as one of their workers would put a bed on the footpath and slam it all over with a rod. This meant that if a stick was at hand at night, we tried the same, slamming our freshly unrolled beds, evoking much anger from the elders.

Sometimes the cotton went old and beds had to be mixed or combined. These involved multiple visits, carrying the beds once, and then following up repeatedly. “Two more days,” he’d promise, before we had to tag along with Appa who always gave them a tongue-lashing. The beds turned up in a few days; thick and taut, almost grid-like, to hold the cotton in place. As always, my brother and I fought for rights to the bed – the new pillow, a negotiation point. When one of us was shipped off to some cousins’ place, the other got full access to both, and promptly bragged on return. 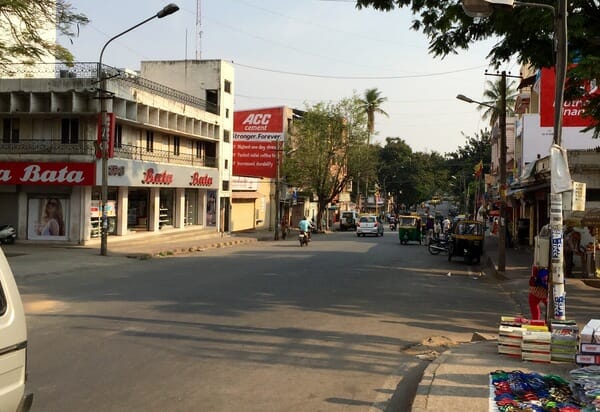 The Bata showroom which is still present. Pic: Vaidya R

There was always this feeling that Chamarajpet 3rd Cross had the answer for everything one might need. Except for a decent place to eat; Hotel Majestic was the one place we never entered. There were bookshops, Bata shoes (which still stands), Chamundeshwari Coffee (still there), Aachari’s shop for provisions, the old-paper mart next to it (where we dropped our old papers and saw our parents receiving money and felt proud about selling something), the hardware shop for tools Appa always seemed to need, the crowded Vadiraja shop for kitchenware, perennially crowded and where you never got things until you lost your patience and created a scene. For more specialised services you crossed 4th Main Road – photocopies which cost Re 1 and were done in a few seconds as you looked in wonder, Venkateshwara Medicals which was bigger and had more chocolates. And you crossed 5th Main rarely, and it always felt like venturing into foreign territory – it was the shopping area for those who lived in Gavipuram and Shankarapuram.

The turn of the ‘90s meant that winters generally had holidays because of some riots. By around 1991 we had started looking forward to them, come December. If 1990 was for Babri Masjid (or was it for the Mandal commission?), 1991 was for Cauvery water with Tamil Nadu. We walked through empty streets – my brother, cousin and I, with our Uncle, all the way to Gavipuram. The police in riot gear looked at us and waved us along through empty streets. A bus stood charred and we tried to make out which factory it belonged to. It turned out to ITI and I wondered how Amma would get to work after this. The next day morning we woke up early and watched Kris Srikkanth thrash the West Indies cricket team in Australia.

This was also the time of Bangarappa’s CM-ship. The extension to the riot holidays came in blocks of weeks, not two or three days as with Moily later. Bangarappa’s resignation after corruption allegations in 1992 also threw up one of the largest headlines I had seen on a newspaper front page – ‘Bangarappa Resigns’ in all caps, a few inches high on the (then) Indian Express. It was hard not to be awed by the size of the headlines, until my brother pointed out that the one announcing Rajiv Gandhi’s assassination was much bigger. I could only remember the image of his leg sticking out among the mangled remains of a lot of people.

1992 came and as it went, schools promptly shut down as riots took over again. This time, we saw the visuals of a Mosque’s dome being brought down on TV. Being the last Hindu house in the area, there was fear. There was curfew, there was rioting. Stones were pelted at the landlord’s house, and we noticed that the window mesh had bent and there were pieces of brick lying in our compound. But at the end of it all, schools reopened and a semblance of normalcy returned.

We went back to 3rd Cross for our shopping. The old paper mart was gone. It was closed and you could see things charred near its shutters. Paper burns well. Aachari’s provision stores next to it stood still and he went about his business as usual. Once we went up 3rd Cross towards 1st Main, and the bedding shop was also gone, charred remains near its door. Apparently, cotton also burnt well.

There were no riots in 1993. Not in Bangalore, at least. We left Chamarajpet in June 1994. Within a few months, there were riots over Urdu news being shown on Doordarshan in October. This time, the holidays were handed out a few days at a time. This time, people had entered the houses in the compound and beaten up the landlord.

The houses were all broken down eventually and a marriage hall – a maroon granite monstrosity – came up in the place. The hall now functions as a godown/warehouse.

Are lack of inclusive public spaces stopping us from celebrating our festivals?

It is festive time, but where is that space in the city or neighbourhood to celebrate, enjoy and get-together?

Of lights and cameras, smoke and soot

Commissioner Praveen Sood heads Bangalore’s heavily stressed traffic police force. In this interview to Citizen Matters, he gives his view of the rapidly worsening mess he has come to oversee.

We are all beggars

BDA is now eyeing the 113 acres of land meant for the Beggar’s colony. They want to move the colony to a smaller section and build convention centre, star hotel and other commercial buildings.