Most of our neighbourhoods in Bengaluru are beset with infrastructure issues; issues that need to be fixed to ensure a better quality of life for us. In a city that is as cosmopolitan as ours, the issues are also not the same across the city; they differ from one neighbourhood to the next.

Every year, our local government prepares an annual budget for the city, in which, budgets are allocated to all the neighbourhoods (wards). Also, a decision is taken on which issues would be taken up for work in each neighbourhood. So far, it was difficult, maybe even impossible for citizens like us to participate in this process and express our needs for our neighbourhood in a structured manner.

Which is why Janaagraha Centre for Citizenship and Democracy has launched MyCityMyBudget. This is a campaign aimed at giving citizens a unique opportunity to participate in the city’s budgeting process. It provides them with a channel through which they can tell the local government what they want for their respective neighbourhoods. 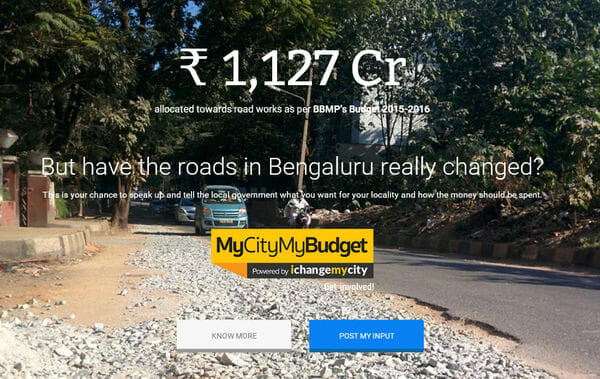 A screengrab from the site.

Do you want that broken pavement in front of your house fixed? Do you want more trees in your street? Is the crime level in your area too high? Do you face erratic power supply? Not enough buses servicing your area? Whatever be the civic issue, this campaign allows you to voice it.

MyCitymyBudget is an endeavour to gather inputs from various citizens and groups across the city and submit them to the local Government. The Government would be requested to consider these inputs while preparing the budget.

To join the campaign, visit MyCitymyBudget and fill up this simple Budget Input Form to let the local government know what issues you want fixed in your neighbourhood. There is no limit to the number of forms you can fill up; which means you can highlight any number of issues in your locality.

KERC directs BESCOM to tie up loose wires
BBMP’s 6728 crore budget: Yet another unrealistic financial plan for the city?

About Ganesh V 2 Articles
The author has not yet added any personal or biographical info to her or his author profile.

“Namma Metro till Silk Institute saves me Rs 10,000 a month”