I was born in a small nursing home on DVG road in 1990. It has shut down now. The last time I checked, I was told there is a PG for women there now. My parents treated everyone who came to see their firstborn to a masala dosey at Vidyarthi Bhavana. The same Vidyarthi Bhavana my dad and uncle used to frequent when they were teenagers. They used to visit the dodda Ganesha temple on Bull Temple road and collect the prasada  –  some flowers and half a coconut. The theory back then was that the other half was sold to Vidyarthi Bhavana by the priests. So, technically the chutney served there was prasada too. Two masala dosas and one by-two coffee cost them a rupee back then, my dad says. Now, it costs a hundred rupees I think.

The city he grew up in — it had people cycling to colleges, schools, work… the running joke as the population increased was that Bangalore’s weather was so amazing that people would come from villages near and far to witness the yearly spectacle that is the karaga, and thanks to the cool showers around the time, they’d decide to stay back in the city of boiled beans — bendakaaLuru. The four towers that Kempegowda erected were meant to serve as markers denoting the borders of the city. Slowly, they stopped serving that purpose.

By the time I was born, the city was still a garden city. We had a few industries and amazing weather. There weren’t any traffic woes. We had lovely lakes and enough rainfall to keep everyone happy. I remember going from my house in Banashankari to MG road in less than half an hour. Yep, that’s how it was. 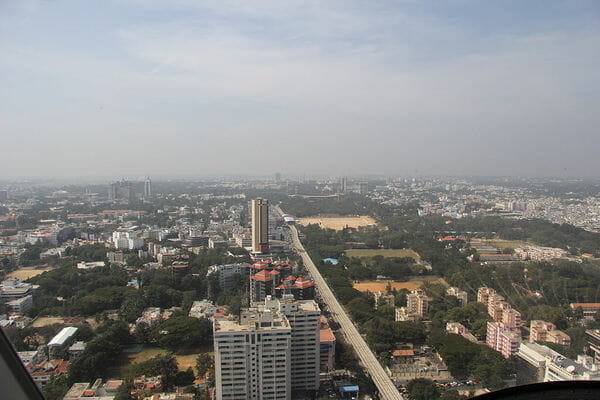 Then it happened. IT happened. So many jobs were created. So many new buildings. Offices, apartments, homes, schools, hotels, hospitals and restaurants were built to start accommodating the newest Bengalureans. Trees were cut down, lakes were filled up and roads expanded. It needed to be done. The city was expanding at such a rapid rate that there seemed to be no better option.

All the engineering colleges and early IT companies gave rise to a talent pool envied all across the globe. So, when the startup revolution reached India, it was Bengaluru that became the natural destination. The talent pool was and remains to this day one of the biggest factors that led to this responsibility and privilege; however, there are several more factors.

Every time I land at the KIAL, I’m spoken to in Hindi and English. Not the language that I and the drivers speaking to me are most comfortable with;  that would be Kannada. On every cab ride I take and every bus I board, everyone is spoken to in their own tongue. That is who we are as a people. We make others feel at home, and adapt our homes to suit how we imagine theirs to be. We have food from every part of the country and world imaginable, because we have people from all those parts, who have settled down here and made Bengaluru their home. All of us earn our living thanks to the amazing populace we are surrounded by. The city has given us several chances and unfortunately, some of us forget this once in a while.

Don’t get me wrong. There are a lot of things about Bengaluru that can and should be criticised. The rents are always increasing. The traffic makes people want to kill themselves. The garbage problem is unbearable and the cost of living is getting worse each day. Constructive criticism and protests are the way forward, and we must do whatever it takes to restore Bangalore to its past glory while keeping its progress intact.

What irks me is ingratitude. The ingratitude of a special kind you see from people who are what they are today at least partly because of Bengaluru and Bengalureans. People who know how to praise other cities and towns using only one route — by hating on Bengaluru. Why would you do that? It is completely possible to praise another city without speaking ill about a city that took you in and helped you become what you are today.

Here, let me show you: Hyderabad has amazing roads. Mumbai’s people are just superb. Delhi has extraordinary food. Kolkata’s culture is top-notch. Chennai has knowledgeable citizens. See? I praised all those places quite honestly without having to compare them to Bengaluru in any way.

It’s easy to criticise that which is our own. Our family. Our home. Our city. Our country. To acknowledge those who have aided us in our journey so far is equally easy and is a lot more satisfying. Hatred is truly taxing. Ask me, I enjoyed writing the first three paragraphs of this post more than I enjoyed writing the last six. All of them were equally effortless though. Mainly because this is straight from the heart. If I’ve offended anyone, walk to your closest darshini and ask for a strong filter coffee. You’ll feel better.

This article was first published on medium.com, and has been republished here with the author’s permission.

About Nikhil Jois 1 Article
The author has not yet added any personal or biographical info to her or his author profile.

Ten things to know to be safe and enjoy, when in Bangalore

This city welcomes all. However, if you know some of these tips beforehand, your stay in Bangalore will become enjoyable!

Just electing a ward corporator is not enough. How can we ensure purpose and direction in a ward’s governance? The answer: ward committees.

BESCOM is just more “public utility service” that harasses the public, in a city aiming to be a “global metropolis”. Worse, unscheduled shut-downs are the height of administrative arrogance and incompetence.