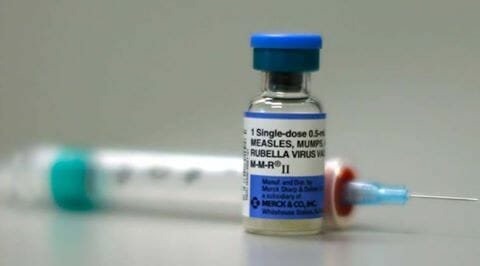 In mid-January 2017, social media groups in Bengaluru buzzed with posts of confused parents who sought to know whether they should vaccinate their child in school – the schools were asking their consent to vaccinate the children against Measles and Rubella. This is a part of Union government’s National Health Mission initiative to vaccinate children across India against commonly occurring diseases among children – Universal Immunisation Programme (UIP).

On February 7th, 2017, the Department of Health and Family Welfare, Karnataka launched a mass measles and rubella vaccination campaign to immunise all children in the State aged between 9 months and 15 years. Karnataka is one among the five states and Union Territories where the MR vaccination campaign is being carried out in the first phase. The two-year-long nationwide drive has been pitched to be a step towards making the country rubella and measles-free by 2020, which is also a goal of World Health Organisation.

The campaign did not go down well with a large number of parents in Bengaluru, who expressed their concerns over vaccinating their children under the mass immunisation programme. For parents who have already immunised their children with Measles, Mumps and Rubella (MMR) vaccination, the government’s immunisation campaign to give an additional dose of MR vaccine did not seem right.

There were also WhatsApp forwards that cautioned against the vaccination drive, against which cybercrime complaints were filed by the government.

Following resistance, the programme gave an option for parents to express their unwillingness against the vaccination. This option was made available in the vaccination invitation card that schools sent out to parents, informing and inviting them for the vaccination drive, on behalf of the Ministry of Health and Family Welfare.

The resistance of parents in Bengaluru to vaccinate their children is also visible in the MR vaccination coverage data. In the second week of launching the drive, according to the data available with the Department of Health and Family Welfare, Bruhat Bengaluru Mahanagara Palike (BBMP) has recorded the least cumulative coverage in the entire state with 43.23 per cent of vaccination as on February 20th.

Many parents argue against vaccines, citing the emergence of vaccine-derived polio virus, which takes birth due to oral polio drive, in areas that do not have good sanitation. There are many cases of vaccine-derived polio in India, which have negated the cause of polio-free India, while the vaccine itself became the source of virus and attacked children with low immunity. Measles is not comparable to Polio, and the dynamics are different for each vaccine.

One of the main concerns raised by parents belonging to middle and high income groups is why to administer MR vaccination, when their child has been already administered with MMR vaccination which also covers mumps.

The vaccination schedule mandated by the Universal Immunisation Programme of the Union Government makes it mandatory to have a Measles vaccination at the age of 9 to 12 months. Though mumps and rubella vaccines are not a part of official vaccination programme, most of the private pediatricians administer MMR vaccine instead of just measles vaccine.

The Union Health Department officials also feel the combination of MMR vaccine is better, for it covers three diseases, whereas MR leaves out mumps.

However, World Health Organisation (WHO) estimated that in 2010, India accounted for 47% of estimated measles mortality worldwide. A study by US-government-supported National Center for Biotechnology Information (NCBI) done in India in 2011 showed that the percentage of children protected against measles was alarmingly low, even after the administration of booster dose, while protection against mumps and rubella was adequate. The paper recommended further evaluation and research on the topic.

Further in 2012, the World Health Organisation estimated that about 3% of children die to due measles. We tried to get the data regarding deaths caused due to measles from Bengaluru urban district from the officials but failed. The data available in public domain for Bengaluru urban district for the period between 2011-12 and 2014-15 shows no deaths of children due to measles.

MR an advantage to unvaccinated children

The government believes that for a large majority of India’s population that relies on government’s immunisation programme, MR vaccination is an advantage. With the introduction of MR combination this year, children will be vaccinated against measles as well as rubella.

“Measles vaccination was part of our routine immunisation. But the World Health Organisation and the Central government have established that rubella too is as harmful to a child, just like measles. It has been decided to give a combination of measles and rubella vaccines in our routine immunisation. The ongoing MR vaccination campaign is the beginning. In future, all the children (who visit government hospitals) in the age group of 9 months and 12 months will be given first dose of MR vaccine and they will be administered with second dose of vaccine when the child is between 18 and 24 months,” Reproductive and Child Health (RCH) State Project Director, Dr Renuka explains.

Dr Sowmini, a private Pediatrician from Rajaji Nagar says the private practitioners however would continue to give MMR vaccination as it is a better combination for it protects children from three diseases. “MR vaccine combination is not yet available for private practitioners, therefore we have been giving MMR vaccine,” she says, adding that this practise will be continued.

So why did the government exclude vaccination for mumps when all the private medical practitioners and several countries in the world have been promoting MMR vaccination?

Reproductive and Child Health Officer (RCHO) Dr Mahesh Kumar says the reason for not including mumps in the immunisation programme is because mumps cases are not so severe and do not affect the child mortality rate. “The concern is to bring down mortality rate among children by eliminating measles and control congenital rubella syndrome,” he explains.

Will an additional dose affect the child?

Dr Sowmini agrees that taking an additional dose of vaccine as part of the national programme will help break the chain of virus.

“Even after having been vaccinated for MMR, your child could still be the carrier of the virus. The child may not suffer because of having vaccinated in the past, but it can still transmit the virus. In order to prevent the transmission and break the chain, participating the campaign would help,” she says.

However, she cautions that parents should avoid MR vaccination if the child has been given vaccinated for MMR in last one or two months or if the child is suffering from any viral infection.

No information is available on the clinical and field trials of the MR vaccine, being supplied by Serum Institute of India. MR vaccine is believed to have less side effects, though there are chances of anaphylaxis (allergic reaction) to MR vaccination.

“It happens only to one in three million children. No such case has been reported in the state so far,” Renuka says. In order to observe whether the children are allergic to the vaccine, they are made to sit for half an hour after administering the vaccine. Any symptom of allergy could be traced within half an hour.

On the cases of several parents refusing to vaccinate their children, Renuka says the department has no intention to force parents to vaccinate their kids. “We can only request them, but can not make it compulsory. It’s absolutely their choice,” she told Citizen Matters.

Dr Mahesh Kumar, RCHO Bengaluru Urban, says the other option for parents who do not wish to vaccinate their child in schools, is to approach the private practitioner or family physician and ask the doctor to administer MR vaccine to the child as part of the campaign.

“We have made provision for private practitioners/paediatricians to place a request with the local government medical officer specifying the vaccine dosage required, based on the number of children to be vaccinated in their clinic or hospital. We will supply them the vaccine depending on their request on a specific date during one of the campaign days and later we will collect the vaccine administered report from the doctors,” he said. This way the parents who avoid vaccinating their children in schools can still be a part of the campaign, if they want.

How to decide whether to vaccinate or not?

Ask yourself these questions:

If your answer to any of the questions is yes, you don’t have to participate in the MR mass vaccination drive.

Do you need to vaccinate against H1N1 this season?
Aged 6, weighing 12kg, she dies a quiet death
Doctors visit D J Halli to assess malnutrition

Breastfeeding: Some useful tips and insights

Some women in urban areas, including Bangalore, aren’t just willing to continue with breastfeeding babies for long. Why? Are their fears valid, or solvable? Here’s an insight into the issue.

High rises in Bengaluru: Here’s what you need to know!

Aviation safety and high rises in Bengaluru: Here’s some knowledge no property dealer would want to share with you!

Bengaluru, once hailed for its COVID response, is grappling with rapid spread now. What transpired between one case reported on March 9 to over 22,000 cases now? Here’s a timeline.