Citizens of Koramangala, HSR Layout and Bellandur areas have come together under an umbrella group called South-East Bangalore Forum for Sustainable Development, to oppose the massive 72-acre IT SEZ project by Manipal ETA Infotech, near Agara Lake. 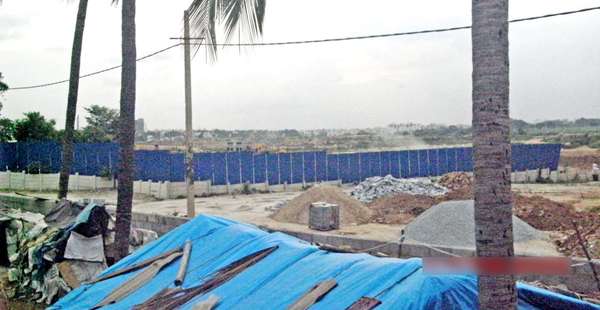 The ongoing construction at the area between Bellandur and Agara lakes Pic: Kedar Nadella

The letters point out that the project is happening in an area declared as “sensitive” in the BDA master plan 2015, which requires a special technical team to look at any development in this area. KIADB, the agency that acquired the land, did not even consult BDA or BBMP or even the Lake Development Authority, given this involves irreparable damage to Bellandur, the largest lake of Bangalore. Citizens are upset that planning process and local government’s jurisdiction has been ignored for what appears to be a pure real estate project.

In light of the report by Centre for Ecological Sciences (CES) of IISc, that highlights the unsustainable plan, the groups say the project can be termed as an ecological disaster.

Citizens also question the traffic impact of the project, that projects an extra 14,000 four-wheelers. With the traffic police not being consulted, there is a real danger of the project being a traffic nightmare for all residential areas around the area, namely Koramangala and HSR Layout.

Residents have also questioned the water requirements of the project, which is expected to be more than what Koramangala and HSR layout receive at the moment. They ask, since the SEIA has prohibited using groundwater in this area, how did KIADB allow self-certification by the allottees to sanction the project?

In addition to the conditions of KIADB allotment not been adhered to, the group says Rajakaluves have been encroached, changing the topography of the area.

The citizen groups urge BDA (planning authority), BBMP (implementer of the Masterplan), and LDA (protector of lakes) to investigate this project and ensure rights of citizens and the future of Bangalore are protected. They have asked BWSSB to withdraw its permission for the portion of the project, as BWSSB is already not able to provide neighbouring areas with adequate quantity of water.

Secretary of one of the Koramangala RWAs, which has signed on to the representation, said on condition of anonymity : “The preservation of Bellandur lake is critical to the survival of south-east Bangalore. If development is not sustainable in terms of water and other infrastructure, then such development is clearly counter productive.”

The citizens’ group has requested CREDAI to disseminate this information to its members. They have also urged industrial bodies including CREDAI, NASSCOM and CII to not participate in the project.

Get your green quotient on at the Whitefield Eco Habba

Join the Whitefield community as they celebrate green living on February 22nd. With workshops, walks, children’s activities, sale of eco-friendly products and more, there’s something in store for everybody.

Will the KCDC neighbourhood finally be free of smelly nights?

KCDC says it has initiated a number of steps to control the foul smell emanating from its premises, even as SWM experts draw up a number of suggestions based on scientific analysis.