Revathi Anne Jagan buys only organic—from pulses, rice, oils to fruits, vegetables, dry fruits and nuts to snacks and fruit juice for her children. She used to go to 12 Degrees Organic in Banaswadi, but now she has switched to Organicz4u on Assaye Road that opened just a few months ago. The new store is more conveniently located, and what’s more, on the route to her children’s school.

Not that the Banaswadi store lacks patrons. Revathi’s neighbour Smitha K goes there still. Smitha too buys everything organic, including organic milk. Because just like Revathi, she too believes that the additional cost of organic food products and vegetables is nothing compared to the harm chemicals in non-organic products wreak on her family’s health. “I started buying organic products some six-eight months ago. Initially I bought organically grown rice. Gradually, I switched to buying everything organic,” says Smitha, who works as an urban planner. 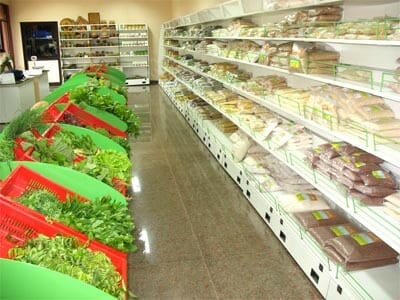 Informed consumers like Revathi and Smitha play an important part in Bengaluru’s thriving organic movement. Other key players include the urban terrace gardeners community, their Oota from Your Thota (OfYT) philosophy, the many city-based businesses that use organic compost to set up small terrace and balcony gardens and companies such as Daily Dump that encourage composting-at-home. Thanks to these combined forces, the city is now the hub of the organic movement in India.

“Bengaluru,” says H R Jayaram, owner of Era Organic in Dollar’s Colony, “has a 100 organic stores retailing only organic products, be it food, vegetables, personal care products or clothes. Mumbai, in comparison, has only about 30-40 stores.” Jayaram has his own organic farm in the Nelamangala area.

This sudden surge in organic produce begs the question, how do you know it is really organic? In the case of food products and processed foods, you can check the organic certification or label on the packaging, but with fruits and vegetables, there really is no way to check. Because in this case, it is the land that is certified as organic. And unless you actually go and meet the organic farmer for yourself, you cannot be sure that the fruits and veggies really are organic in origin.

Most of the organic vegetables and fruits sold through stores in Bengaluru originate from farmers’ groups or cooperatives in Hosur, Doddaballapura, Kanakpura, Nelamangala, Devanahalli, Kolar, Madhugiri, Gowribidanur, and even Ooty. Of course there are growers across Karnataka, but these places are closer to Bengaluru and are easier to source from.

According to Parvez Mulla, who runs Organicz4u along with two friends, “…right now, demand is more than supply”. Parvez says that since the big companies have entered the organic fruits and vegetables scene, small and independent store owners are feeling the effect. “The bigger players also tap into the same sources and can probably pay the farmers better rates. Ultimately, that affects our supply,” he explains.

Some store owners like Jayaram of Era Organics grow their own produce. Some of the bigger players fall back on private vegetable growers like Ambrosia Vegetables.

Why organic is costlier

The process of getting organic certification is a costly and long drawn out process. Then there are intangible costs such as the effort that goes into growing, processing and storing organic produce, transportation costs to Bengaluru, etc. “Prices will reduce if more growers turn organic and supply increases,” says H R Jayaram.

Preetham Kumar Sinha, an organic grower living near Bannerghatta Road, has more reasons to add. “Initially I had invested on organic fruits and vegetables, but the price of transportation was way too high to be able to sustain that business.. The transportation cost involved is more than 20% of the total price of the fruits.”

“The business will be profitable only if I can sell around one lakh fruits within 3-4 days. Organic fruits have a very low shelf life, since no preservatives are added. I ran a loss of 60-70% on this venture in a week or two, because all the fruits and vegetables not sold within 3-4 days are a complete waste,” he explains.

Jaivik Kisan Society officials say that their rates are based on HOPCOMS (Horticultural Producers’ Co-operative Marketing and Processing Society) prices, but with an added premium of 20-25 per cent. The private suppliers’ rates are even higher.

Ambrosia uses greenhouse technology to grow vegetables that are “disease free, chemical-free and from genetically superior varieties,” according to its website. Its customers include hypermarkets such as Metro Cash and Carry, Auchan hypermarket, Oasis Mall, Gopalan Mall, Total Super stores; Gourmet Stores (Nature’s Basket and Food Hall, M G Road); super markets such as Heritage fresh in Yelahanka and Indiranagar and also BigBasket.com.

Ambrosia, according to a spokesman, has a huge farm in Kanakenahalli in Doddaballapur. The company has the capacity to supply one to three tonnes of vegetables every day. “But we do not claim that our vegetables are organic in origin,” the spokesman said.

So how big is the “organic” vegetables market in Bengaluru? There is no exact data available but according to an official from the state-run Jaivik Krishik Society (JKS) headquartered in Lalbagh, the JKS gets one tonne to 1.4 tonnes of organic vegetables a week on average. “We get at least 500 to 700 kgs of vegetables, twice a week,” he explains. JKS gets its supply from organic farmers in Doddaballapura, Srinvasapura (in Kolar), Nelamangala and Kanakpura.

One of the biggest private organic suppliers is TVS Organics started in 2013. The company sources on a contract basis from organic farmers in Hosur, Krishnagiri district in Tamil Nadu, and is responsible for 30 per cent of the organic vegetable supply in Bengaluru, says the JKS official. (TVS Organics, according to data on Indiamart.com, has a turnover of Rs 2 to Rs 5 crore approx).

Is it really organic?

How do you, as a consumer, know what is genuine? In India, organic produce/products come under the National Programme for Organic Production (NPOP) of the Government of India. There are also various certification agencies, such as Bureau Veritas, Ecocert, IMO, Indocert, Aditi Organic Certifications, Biocert, Indocert etc—that certify if a farm, the land, the produce, the processing and storage methods used, are “organic”. Products and produce from certified farms will bear labels such as India Organic, or the appropriate label of the certifying agency. For the full list of certifying agencies, click here.

However, apart from certification, there is also the matter of trust, and belief in the farmer and his produce, points out Rama Satish of Green Foundation, an organisation that works with small and marginal farmers. “Getting organic certification is hugely expensive (it can cost on average Rs 30,000 a year). For small farmers who cannot afford this, we have something called a Participatory Guarantee System (PGS) where one farmer vouches or certifies that his neighbour also uses organic methods,” explains Rama.

The organic market is one where physically going to a store where you know the owner is preferable to buying “organic” vegetables online. This is because most organic store owners passionately believe in the organic philosophy and will encourage you to visit the farm from where they source their vegetables.

For people like Smitha and Revathi, that trust is paramount. “My older son had some health issues as a newborn so that’s when I started worrying about the food we eat,” says Smitha. The family lived in Hyderabad then. “First, I cut out processed foods and foods with preservatives from our diet. When we moved to Bengaluru, Revathi told me about 12 Degrees Organic in Banaswadi. Switching to organic is more expensive—I spend 25 per cent to 50 per cent more than what I used to pay for non-organic products. But my 10-year-old and five-year-old fall ill less often, their immunity is more robust, we are all healthier. For me, that is what matters,” she points.

About Divya Sreedharan 1 Article
The author has not yet added any personal or biographical info to her or his author profile.

Are the new laundrettes taking over from the dhobis?

Some laundrettes charge Rs 25 to wash a handkerchief and some Rs 38 per kilo of dirty laundry. And quite a few people still prefer the age-old dhobi. Never before have options in the city been this diverse.