To me, history has always been about philosophy and physics – the study of cause and effect and Newton’s 3rd law i.e. every action has an equal and opposite reaction. I prefer to focus on why someone did something and what it led to, rather than when they did it. This proved true while researching Mootoocherry, along with a friend, Anna, in the eternal hope that at some point I will be able to do a segment of Neighbourhood Diaries on the area, along with all historical neighbourhoods of Bangalore!

Anyways, here’s what I found:

In 1807, the British army requests permission to set up temporary camp in north-east of the Pettah (Bangalore city). They soon occupy the most prominent ridge in the area, running east-west (today’s MG road). Civilians settle to the south of this ridge leaving ‘native’ camp followers, pensioned soldiers and ‘Eurasians’ to occupy the less salubrious slopes to the north of this ridge – thus leading to the creation of two districts, St. Mark’s and Mootoocherry. 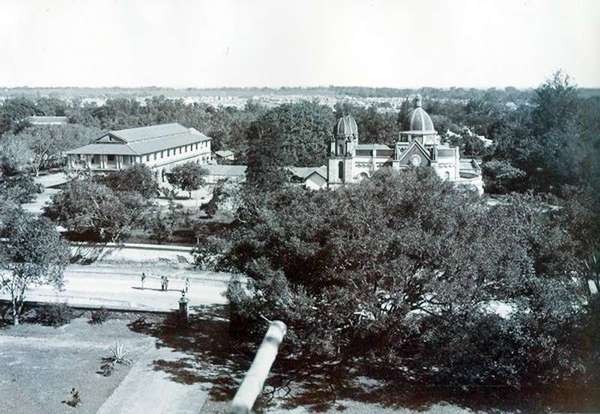 Why Bangalore? Well, its climate and the absence of mosquitoes, which were literally eating into the army stationed at Srirangapatna, after the defeat and death of Tipu Sultan in the 4th Mysore War.

There was a lesser ridge to the north of Mootocherry, (possibly an altered form of the Tamil ‘Maatuseri’/’Maatuchary’, literally cowshed), also running east-west (today’s Promenade road). In 1883, this and land further north up to a nalla (canal) became Cleveland Town – in honour of John Wheeler Cleveland, Senior General in Her Majesty’s Army, with 75 years of service, who died that year at the age of 92.

25 years before the above event, the Anglican St John’s Church was consecrated in Mootoocherry. Again Cause and Effect – the pensioned soldiers and poor Eurasians, were not welcome in the Company church of St Mark’s as they were deemed to be lower class. The assistant chaplain of St Mark’s, Rev. Posnett decided to set up a separate church for them on this lesser ridge, where there already existed a pensioner’s chapel of unknown origin (no records for this).

Over time this chapel morphed into a church and Mootocherry became St John’s Hill district, reminding one of ‘the English countryside – with the spire of the church and a cluster of cottages around it. Attracted by this romantic vision, British and Europeans moved into Cleveland town – leading to gentrification of the area. Finally in 1906, further expansion north of the ’nalla,’ giving birth to Fraser Town.

While the gradual transformation of the area was taking place, Mootocherry ridge was already looking attractive to a number of missionary societies. One of the mission records indicates that the area had a huge population of “poor and wretched heathen waiting to be brought into God.”

The missionaries faced a number of trials, but today we have the nearly 160-year-old Goodwill Girls High School and college as the result of their zeal. The original mission school was renamed Goodwill School in honour of Fred Goodwill, Manager since 1906, a Tamil Scholar, active in promoting the education of women. (On retirement and return to England, he used to stop anyone dressed in native costume he met, and quizzing them, hopefully looking for someone to speak to him in Tamil!)

While all these stirring events were taking place, in 1883, Father Jean Yves Marie Coadou of the Paris foreign mission, a Catholic missionary group, had a headache. Father had invited the sisters of St Joseph’s of Tarbes to Bangalore anticipating they would serve in Bowring Hospital. This made Mother Superior of Good Shepherd convent, who had been invited to Bangalore earlier, unhappy – she felt their order was meant for hospital work. Father then decided to let the Tarbes sisters run a small school on Mootoocherry ridge but Mother Superior was still unhappy as Good Shepherd had already started a school in their convent compound.

Finally, the Tarbes sisters were given land north of St Francis Xavier’s and St John’s churches, where they set up a primary school, precursor to today’s Francis Xavier School, Holy Angel’s School and Jyoti Nivas college. Had they not been shifted from the hospital, a number of prominent educational institutions of Bangalore would not have existed today.

Shifting of St Joseph’s to the heart of the city

The small school on the ridge in turn morphed into St Francis Xavier Boy’s School, St Rock’s school and St. Aloysius schools, all of them laid out around Francis Xavier Church in the center. This church was consecrated in 1851, due to the efforts of Father Chevalier, but existed as a chapel before that.

Father Chevalier was the predecessor to Father Coadou and successor to Father Charbonnaux – the one who invited the Good Shepherd sisters to Bangalore and more to our purpose, founder of St Joseph’s school and college, next door to Francis Xavier church.

While Father Coadou’s headache was troubling him, Father Vissac, also with the Paris foreign mission was having a vision. He conceived of shifting St Joseph’s to the heart of the Cantonment. This move was finally effected in 1898 and sure enough it moved to a property next door to Good Shepherd Convent.

Once the school was shifted, the buildings in Mootoocherry became the Bishop of Bangalore’s residence and finally when a parishioner gave land for sale for the Bishop to construct a proper residence, the buildings became a school again – St Germain’s. This transformation was effected by Rev Thomas Pothacamury, first Indian Bishop of the diocese, buried in St Francis Xavier Church (by then Cathedral) after his death.

So, had Bangalore not been what it was geographically, had its landscape been flat and not rolling open terrain, had there not been mosquitoes in Srirangaptna, had the Army not settled in Bangalore, had Father Coadou not had a headache, had Father Charbonnaux not invited the Good Shepherd sisters, had Father Vissac not wanted to move to the heart of the Cantonment, had Rev. Posnett not felt bad for the pensioners of Mootoocherry, the city would not be what it is today!

INTACH announces the winners of the 2nd edition of the Heritage Awards, set up to bring attention and recognition to buildings of heritage value in Bengaluru.

The happy girls of Baale Mane

A home among the lush green ragi fields is the ideal retreat for 60 underprivileged girls, who find a home and future in Baale Mane.