Smitha, a resident of Malleshwaram, has put her wet and dry waste together in the plastic as usual near the gate. After a while, the calling bell rings. She opens the door to see the garbage autowallah who takes away the waste silently everyday.

Today is however different. He tells her, “Amma, please segregate waste, don’t put wet and dry waste together. We have been instructed to tell people this, and there will be fine if you put mixed waste together.” Everyday he does the segregation himself using his own hands, but hereafter it is the residents themselves who have to segregate waste.

Trying until they get success

On November 21st, the BBMP Special Commissioner to Solid Waste Management., Subodh Yadav, issued a circular with an instruction to strictly follow waste segregation at source in accordance with Solid Waste (Management and Handling) Rules 2000.

This is not the first time the BBMP started working on segregation. Not too long back, in September 2012, then BBMP Commissioner Rajaneesh Goel had issued guidelines on how waste should be segregated as wet, dry and sanitary waste. But, the system failed even after people attempting to segregate it, due to segregated waste getting mixed up before reaching the end point.

This empty plot in Indira Nagar became a garbage dump over the years. Mixed waste is dumped here by residents and civic workers. Pic: Praveen S

However, this time, the BBMP appears confident of learning from its previous mistakes. At least, the Palike Commissioner says the waste segregation system will only get better this time, for the situation in 2012 was different compared to present.

“In 2012, we did not have a system in place to process the segregated waste. Now, apart from Karnataka Compost Development Corporation (KCDC), dry waste collection centres and waste processing units like Terra Firma and MSGP, we also have additional six waste processing units. These units are developed with an intention to process only the segregated waste. All we need to do is to streamline things,” BBMP Commissioner G Kumar Naik informed Citizen Matters.

What does the circular say about segregation?

The recently issued circular has references to the previous waste segregation guidelines issued by the BBMP in 2012. The circular emphasises on segregating waste at source in accordance with the SWM Rules, 2000. Here are highlights of the circular:

These guidelines, the circular says, are issued considering the problem of waste disposal the city is facing, following opposition by villagers for disposing waste in Terra Firma and MSGP plants. As many as 189 dry waste collection centres and 12 bio-methanisation units are not functioning effectively as they receive non-segregated waste, the circular says.

Why are there garbage dumps on roadsides?

The heaps of garbage piled up all over the city will disappear only if the waste is segregated at source, says the BBMP Commissioner. The garbage started mounting everywhere in last one month, after all processing units closed their doors for trucks that bring mixed waste. In addition, villages around Bengaluru are refusing to take the waste in their dump yards, as they are affecting their quality of life.

The trucks which are sent back, dump the waste in city. This problem could be solved only if the chain of segregation is maintained, by people segregating waste, civic workers collecting the waste separately and contractors or transporters helping in maintaining it.

“When the segregation rule was enforced in 2012, the last point in the loop disturbed the entire chain. We do not want the same to happen this time. We are creating awareness among civic workers to collect only segregated waste and also tell the people to give segregated waste,” Kumar Naik says.

However, one of the challenges before the BBMP is dealing with people who do not segregate waste. What if people give non-segregated waste to civic workers? As it has happened in the past, public will find an easy way out to dispose the non-segregated waste, by conveniently dumping them by the street side.

“That is one major concern that we should address. We do not want to penalise people and that is the last tool in our hand,” says the Commissioner. To one’s wonder, despite failing to implement waste segregation at source, the BBMP has so far not penalised any individuals for violating the rule. The Karnataka Municipal Corporation Act, 1976 has provision to impose penalty on individuals who violate the Rules.

“We will first penalise commercial establishments (bulk generators) that do not segregate waste even after repeated requests. It will be then followed by penalising individual households who flout the rules,” the Commissioner says.

Recently, Mayor Padmanabha Reddy had said that the BBMP is mulling over doubling the penalty on those households that do not segregate the waste. At present, the penalty amount is Rs 500. He had also warned that the Palike would book cases against repeat offenders. The BBMP is expected to impose penalty starting from January 1st, 2016, after the work orders are issued to new garbage contractors.

Meanwhile, the Commissioner has claimed that waste segregation has been successfully implemented in RR Nagar zone. “Segregation is happening up to 90 per cent in RR Nagar. If the people and contractors in RR Nagar can do it, why not others?” he asks.

The wet waste generated in RR Nagar is transported to Doddabidarakallu processing unit. The new unit has been established with a capacity to process 300 tonnes of waste per day. At present, it is functioning up to 60 per cent of its capacity. Apart from wet waste collected from RR Nagar, the BBMP is also sending some quantity of segregated waste from K R Market to this unit. The unit is manufacturing compost that will be released to the market soon, the Commissioner informed.

There are five other waste processing units in the city, that are yet to function to the full capacity. Though they are ready to function, they cannot accept waste until and unless the segregation takes place at source across the city. If the new units start accepting mixed waste, it will only add up to the existing problem. They will become yet another Terra Firma or KCDC, says the Commissioner.

The BBMP authorities are also hoping to lessen the burden on MSGP and Terra Firma processing units, once the waste segregation at source is implemented effectively. As of now, the Commissioner says segregation at source is happening up to 30 per cent in the city. That is, if the city is generating 3,500 tonnes of waste every day, approximately 1,100 tons of waste is segregated at source.

With this situation, it is a huge task for the BBMP to achieve complete waste segregation at source. “It is a slow battle to win and we hope that this time it works,” Kumar Naik says.

In order to create awareness among people about the need for waste segregation at source, the BBMP has taken up a few campaigns and programmes to reach the public. One such initiative is launching of mobile display vans. The 10 vans equipped with loudspeaker and staff to distribute pamphlets, that were launched on last Friday, will travel to each zone. These vans will travel across the city for one month. 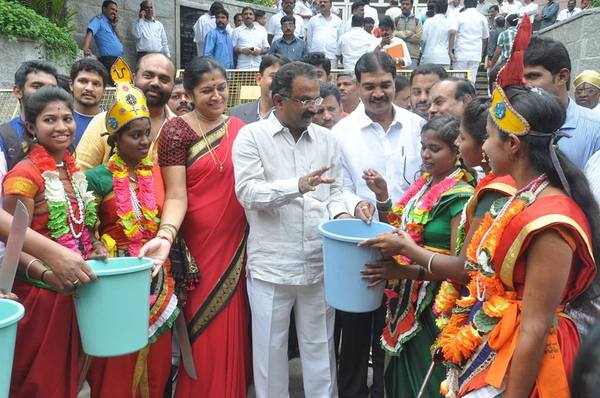 Yet another initiative is raising awareness through street plays. As many as 12 troupes have been formed which will stage plays on the importance of waste segregation in various parts of the city for next 15 days.

Speaking at the BBMP’s monthly council meeting on Monday, Mayor Manjunath Reddy said that the Palike will also involve radio and other forms of media to spread awareness among people.

Invite mobile vans and street dramas to your area

People who wish to create awareness about waste segregation in their ward can invite the mobile van and street play teams to their area. Interested can contact the local Assistant Executive Engineer for their ward and place the request. If you don’t have the numbers, call up BBMP control room 22660000 to find out the numbers.

Based on the availability of the van / team, the AEE will fix the schedule. The programme will either be organised in a public place or in a place suggested by citizens if they assure to gather crowd at the venue, BBMP Health Officer (South) Manoranjan Hegde told Citizen Matters.

To know more about waste segregation at source refer this article: How to segregate your waste